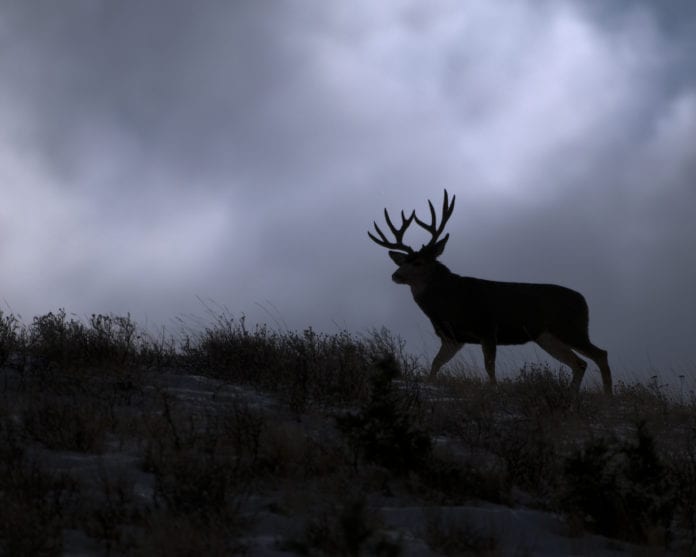 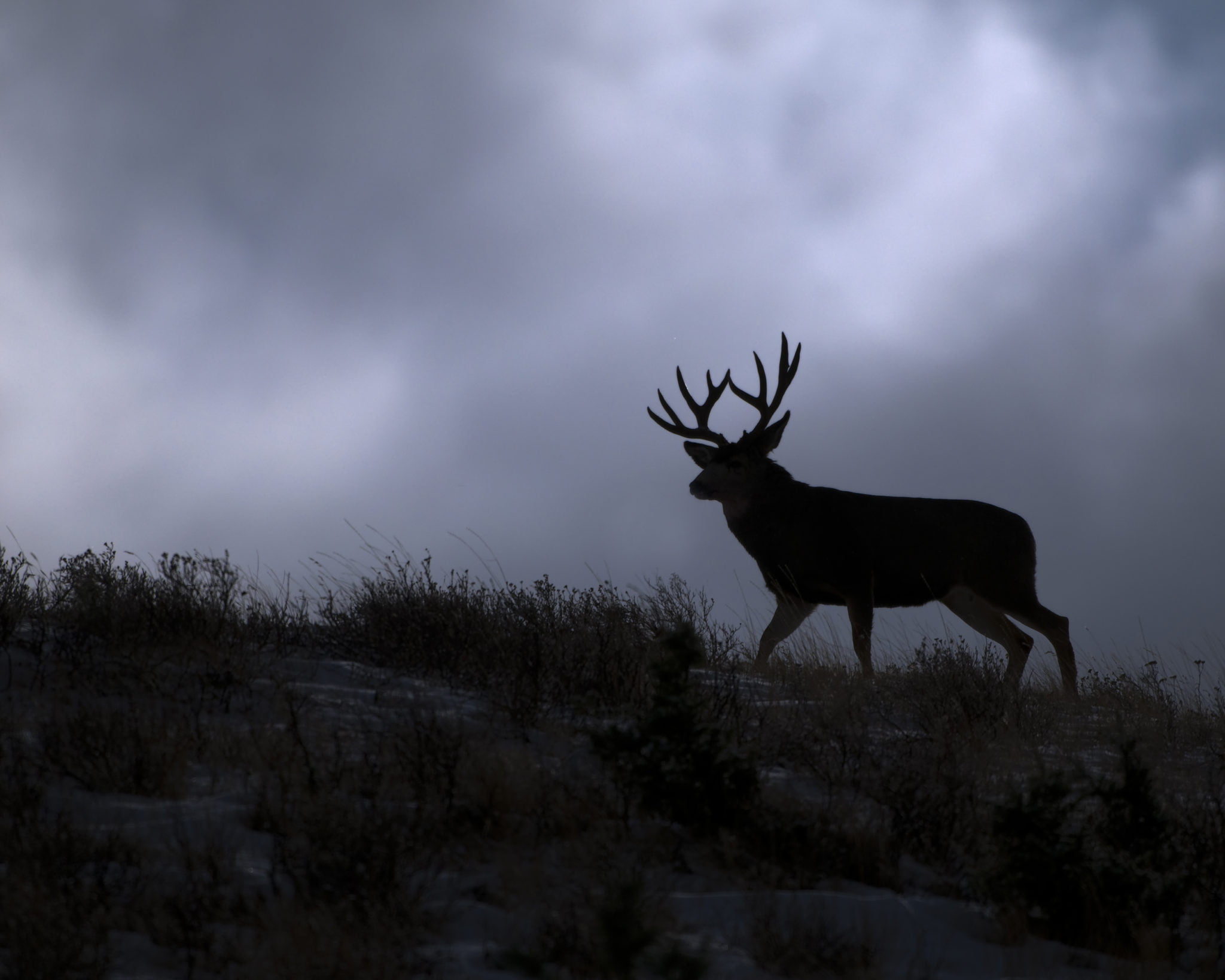 This one’s a long shot, but in my effort to help people become better big buck hunters, I need to get this out there.

Back in 1995, my dear and late friend, Eddie Irigoyen, was logging on a 7,000 acre ranch in SE Idaho.  He was working on the upper ridges that grew timber and aspen. The lowest reaches of the ranch were considered critical mule deer winter range.  A few hundred deer from the surrounding units would make their way to that sage and coulee country each December to eek out a living until the snow retreated in late March.

He showed me a few big sheds that he’d picked up on that winter range so I figured the higher country of that ranch–pushing 7,000 feet–probably summered some of those same bucks.  Eddie got me permission to hunt come fall, so in July we scoured that higher country over multiple trips for bucks, but turned up nothing.  Not a single buck.

Come late August, as Eddie was was driving up to the logging operation, he caught a herd of bucks down low in the sage–on the aforementioned winter range.  He called me when he got to town and was so excited to have found the bucks. I frankly had a hard time believing him.

But I trusted Eddie, so we resumed scouting the next day, but now in that lower country. I was surprised and encouraged when he showed me the tracks from the bucks he’d seen. Over multiple trips, I never laid eyes on those bucks myself. I’d found another great buck on public land so I spent my ’95 season hunting him.  Eddie never found the ranch bucks again that year.

The following summer, 1996, when I found out that the ranch needed a man for repairing fence, I took the job (and yes, I had ulterior motives).

Soon I had the the trust of the landowner and permission to hunt another year.  He also allowed quite a few other people to hunt, but it was still better than the surrounding public-ground fiasco.

Just a few weeks into September, Eddie and I finally found some bucks summering down on that winter range, and one of them was a complete giant!  I figured he was pushing the 40″ mark and was the 2nd widest buck I’d ever seen in my life (still is 24 years later).  I’ll never know if it was one of the bucks from the previous year.

The season opened three weeks later and as the story sometimes goes, we didn’t kill that buck–another hunter visiting the ranch for the day killed it, and about 500 yards from where we’d seen the buck in September.

What did I learn?

If you find a big buck, remember that they’re not lost children just wandering the landscape.  Most of the time they are where they are for a reason–and you should hunt there… A LOT.

Also, I learned that big deer sometimes live on winter range year-round.  I’d first read about that phenomenon in Kirt Darner’s original 1983 book “How to Find Giant Bucks”, but I’d never witnessed it myself.

Fast forward to 2020, and I’ve seen several other great bucks living on winter range year-round.  And I’ve killed a 191″ and a 175″ buck on winter range–in September–over that period. 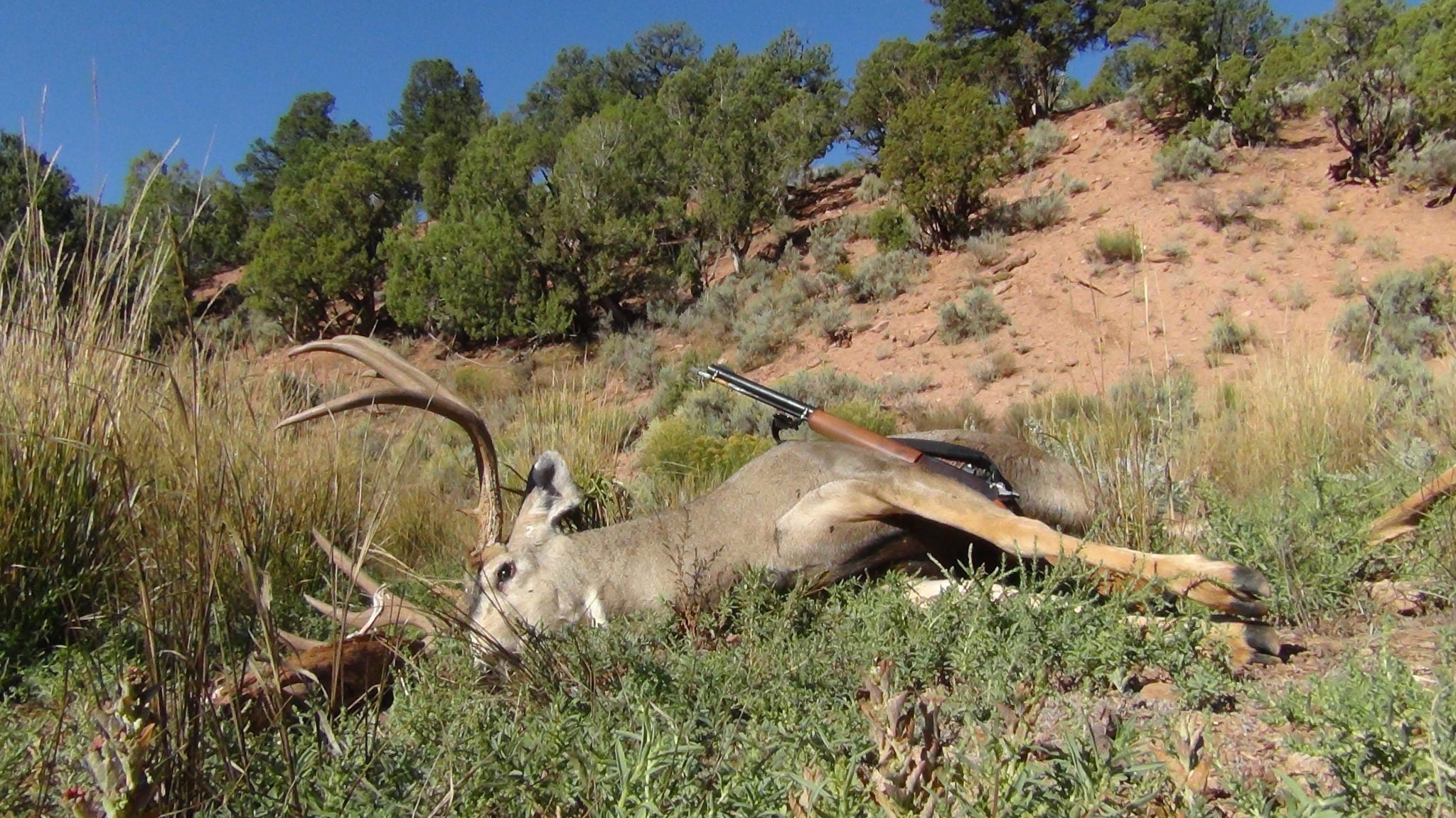 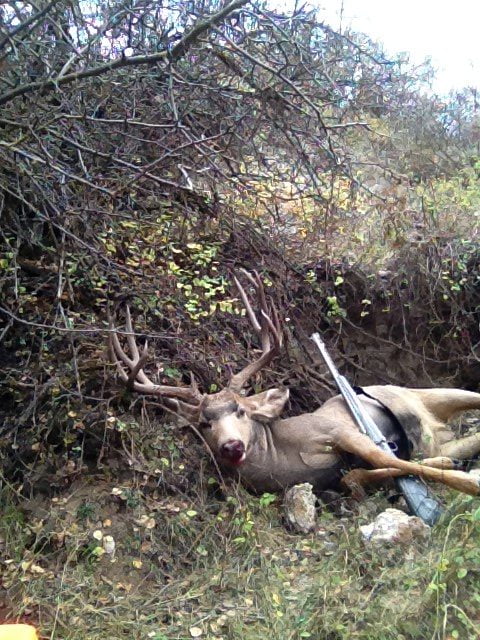 The 210″ buck that I named Jalepeno summered on winter range, too (videos here).  So I know it happens on occasion.

What to Look For

This is the long-shot part: I still think it’s very uncommon for big bucks to live on winter range year-round, especially in the mountainous regions of the West.  The good groceries are up high in the summer, and most deer go high. So there’s my disclaimer.

However, out of the five or six really big deer I’ve seen living low, the areas had all these factors in common:

All of the big bucks I’ve seen were in areas with big and healthy antelope bitterbrush, at least some aspen and/or juniper, and finally sagebrush in the four-to-seven foot range. In some cases, there were crops available.  There were also reliable water sources

That is usually my first clue that I’m on winter range.  For a buck to get really big, he usually needs to be at least four years old. That means he’s been shedding in and near the area for at least several years. So there should be his or other buck’s sheds around. With the massive shed hunting pressure nowadays, it’s hard to find sheds yourself, but I’ve had more than a few shed hunters tell me where they’ve found big sheds, so I always consider that country when looking for bucks living on winter range year-round. Remember, though, that just because you know where big sheds came from, it rarely means there will be big deer there in hunting season, but it’s a start.

Remember, I hunt mostly the mountainous portions of the West where bucks migrate miles to hundreds of miles, and few bucks live on winter range year-round.  There are big chunks of western desert country where I believe this phenomenon is more common.

No matter where the winter range is, if I’m looking for big bucks, I’d still look for great habitat, security, and water. Finally, I’m only going to know if big bucks are there during hunting season if I pre-scout, or hunt the area many times.

If you really like hunting big mule deer, check out my book, Hunting Big Mule Deer. Signed copies are available in the Rokslide store, or you can go Amazon for faster delivery.