I've had a lot of great seasons and killed some great animals over the years but none even come close to his awesome season I had with my oldest boy Hunter for his first year with tags in his pocket. Here in Idaho you can hunt birds and Turkeys at 8 and big game when you turn 10, he was only 9 this spring so bear hunting was out but got him a Turkey tag and as luck would have it we found him a bird to shoot! 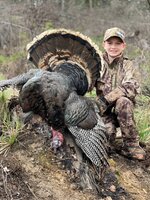 Shortly after that Idaho posted their draw results and I was stoked to see he drew an extra doe tag and a Late season bull tag! My boys have always gone to the range with me and have been shooting long range for quite a few years now. All their shooting up to this point has been prone or off a bench, so all summer we worked on different shooting positions, added a tripod to the mix and did a lot of standing and shooting with that setup throughout the summer. 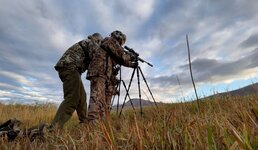 His extra doe tag opened 1st of Sept but he didnt turn 10 tell the 20th of Sept so we skipped school on his birthday to go deer hunting, we went out the night before and found a lot of does. Next morning we snuck out to where we last saw them the night before, they were about 500 yards out and too far for him to shoot standing, luckily a coyote spooked them and got them heading our way for their morning bed. When they got about 200 yards he could finally see their bodies over the tall grass and told him to take the shot whenever he was comfortable and he touched it off and made a perfect double lung shot on his first deer, couldn't think of a better way to spend his birthday! I had big plans of taking him up in the mountains where I hunt muleys but the weather was supposed to be cold and snow everyday, we put a lot of miles on and didnt want to worry about keeping him warm, when he shot his doe there was a couple nice whitetail bucks with here so we decided to go after them instead. Night before the season we found the bucks but they where on a neighbors property we didn't have permission to hunt, that night we looked on the maps and the property there where on had no good spot for them to bed so we figured he'd head our way in the morning, as the sun came up I was pleased to see the bucks where on the property we could hunt, they were 440 yards out, we tried to prone him out but the grass was too tall, I set him up in a sitting position but he was cold and said he was shaking to bad to make a good shot so we jumped in the creek to sneak closer. We popped out at 180 yards, got him setup standing with the tripod, told him the best buck was the closest one and to wait tell it clears the group, as soon as he did he put a bullet tight on his crease and the buck didn't make it far! Was proud of him for not pushing a shot he didn't feel comfortable with and making the decision to get closer. 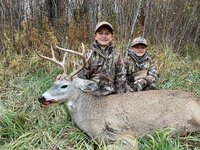 I haven't missed opening day of muley season in over 10 years but it was well worth the time with my boy getting his first buck and I was able to kill one of my favorite bucks 2 days later! November felt like it was never going to get here but it finally did and after elk we went, first weekend wasn't very productive, second weekend we only found 2 bulls, one was a monster we got within 500 yards of but the wind was a little too strong to feel comfortable shooting the 300 wsm with 178 grain bullets that far, was really wishing I had a Rum or Norma I usually hunt with that day that would buck the wind better! Finally after 8 days we found another group of about 20 bulls, we got to 540 yards and picked out the best bull in the bunch, got him setup and he said he was solid, told him to wait for the bull behind him to clear then take the shot, about then alll the elk pick their heads up and I see 2 guys walk sky lined over the ridge and the elk where on a dead run, luckly they where headed our direction, when they popped out at 300 i dialed the scope down and told him if i could get them to stop pick the best one that gave him a shot and shoot it but they didnt stop, the next ridge they popped out on at 200 told him the same thing, I was able to get them to stop and he touched off the shot and I heard a solid hit but didnt know which one he hit, about the time I find him in my binos he asked if it was the bull holding his front leg up, I said yes and BOOM he sent another one into his front shoulder, I didnt even know he reloaded but told him all year to shoot a elk tell it stops, after the second shot he took a couple steps and tipped over. Wasn't how I played that out in my head but was really proud of how he kept his composure in a rather high speed stressful situation and put two great shots on his bull. Now we'll pull out the yote guns and try and stack a few of them up this winter! 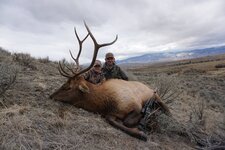 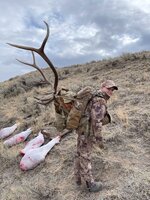 Wow thats awesome! Congrats to you both
OP

Cameron.25 said:
Wow thats awesome! Congrats to you both
Click to expand...

Awesome job to you and the boys. What a great season full of memories for all of you.
OP

That's fantastic!! That is one lucky kid to have a dad like you!! Congrats to both of you!!

Congrats, that is awesome!
H

Hooooly, thats one heck of a first season you've given him, well done to you both

Amazing! Makes me want to move east! Youth hunts in Wa have not been great.

DAng I missed this. Good to have hI’m moving up through the ranks, and a good dad to show him the way #gooddad

Awesome! Congrats to y'all!

Congratulations! That’s amazing for both of you!

congrats!!
You must log in or register to reply here.