Well dad and I got it done in Wyoming on opening day. A lot of prep was put into making this trip work and the efforts all paid off.

Everyone I’ve talked to about antelope said that it was a three day hunt but I never believed it. I screwed up the day that the season opened and thought ( for reasons unknown to me) that season on Monday. Well wasn’t I in for a surprise when we were scouting on Sunday and I happened to look at the regs…….. so we spent all day Monday scouting again and shooting some prairie dogs. As dad likes to say “ at least I’m not at work”

We got into position this morning at first light on opposite sides of the road and both were getting ready to make shots when a truck pulled up and sat watching us and watching the antelope. If you haven’t been to wyoming before it seems in this particular unit that they are very much used to being road hunted. Drive by slowly and they don’t seem to care, stop the truck or get out and they haul ass. Well this guy stopped and when he did he blew out the antelope.

We moved on to other spots we had scouted out and after a couple failed attempts at stalks we saw multiple small groups in huntable land.

Dad took his group and I took mine and miraculously we both dropped one. I took my shot standing with zero support at about 250ish yard and dad took his supported by a hay bail at 385.


Lessons learned:
1.antelope will be near water. Near can mean miles
2. They like to hang out in the same areas
3. Be ready to take a 400+ yard shot.
4. Be ready to get low to stalk antelope.there’s little cover.
5.if the antelope aren’t where you are keep moving. They can move a long way quickly but seem very content to lay on the side of a dirt hill 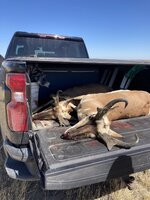 Congratulations! I tried out for a tag this year (first time) and didn't draw. Watching these threads hurts!
W

Congrats to you guys, a trip you won’t forget.
J

Congrats! Killed my first one in 2016. Some fun hunting for sure!
J

I went out there with my dad last year and it’s a trip I’ll never forget. Congrats on your success.

Hey thanks to all you guys for the posts here and answering my questions earlier in the year. This forum continues to be a wealth of information and help and I can’t thank y’all enough.

Nice work! Glad you had a great trip with your dad.
C

Congrats on a great antelope.

Congrats to to you and your dad! As many others have said, I started drawing for non res points this year. So, it might me some for next years hunt. God Bless on a successful hunt.
L

I got a pm asking about water/ drought that I wrote this lengthy response to. I thought I would just go ahead and share my observations as they might help others.

We were in 34 in the south east. I’ve never been to wyoming but from what I saw numbers were poor. That unit hands out 600 tags and despite spending 2 days driving the entire northern 50% unit we probably saw less than 300 antelope. I know they cut the tag numbers from 1200 to 600 bc of drought. We had a good hunt and I’m very grateful we both tagged out but what we saw had me concerned about the sustainability of antelope in that unit. Take that with a grain of salt as this is my first trip to wyoming, I’m just comparing the numbers we saw to the tag allocations and I don’t think the math adds.

That said we did see a lot of water from recent rainstorms. Despite that we still saw a raging brush fire going across the prairie that had several fire departments responding, it was downright scary how fast the grass was lighting up.
D

Congrats. Thanks for sharing your story and lessons.

Man a standing off hand 250 yard shot is legit.
J

Always good to hear a "father / son" success story. Congrats on the antelope and, more importantly, a bonding experience.
T

Congrats.
You must log in or register to reply here.