Carr5vols said:
What edition is it going in JOHM.
Click to expand...

I imagine it'll be online; i'll update this thread when it's published.
OP

MuleyFever said:
Who did you hunt with?
Click to expand...

After our feast of mountain goat the night before we headed down the valley and set up camp. 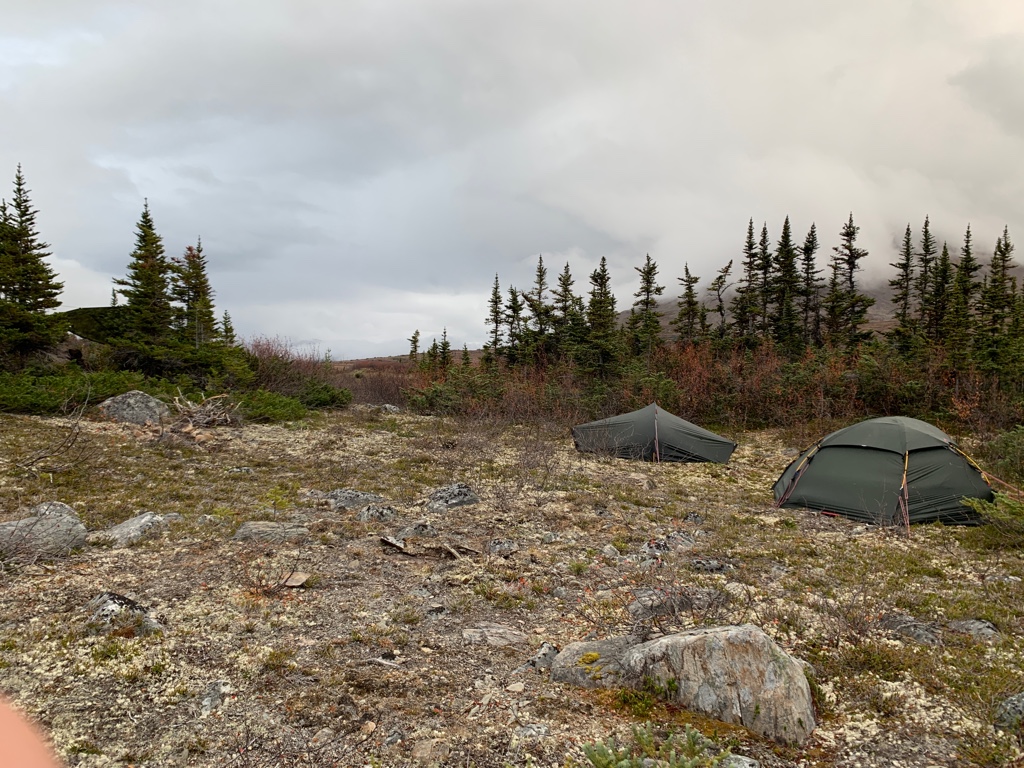 Day four and five were filled with calling, eating, calling, cards and more calling. From a previous hunt the boys knew there was a big bull down the valley and around the bend. However, we weren’t sure that our makeshift moose horn was projecting enough sound, and it was still pre-rut. Even if a bull could hear us, we weren’t sure he’d want to play. After two days of no action, and plenty of rain, we were a bit discouraged, but we still had a caribou tag we could fill. Day five ended with us finding a big bull caribou up in bowl across the valley from camp. There wasn’t enough time to get to him, but we were going to chase after him the following morning. 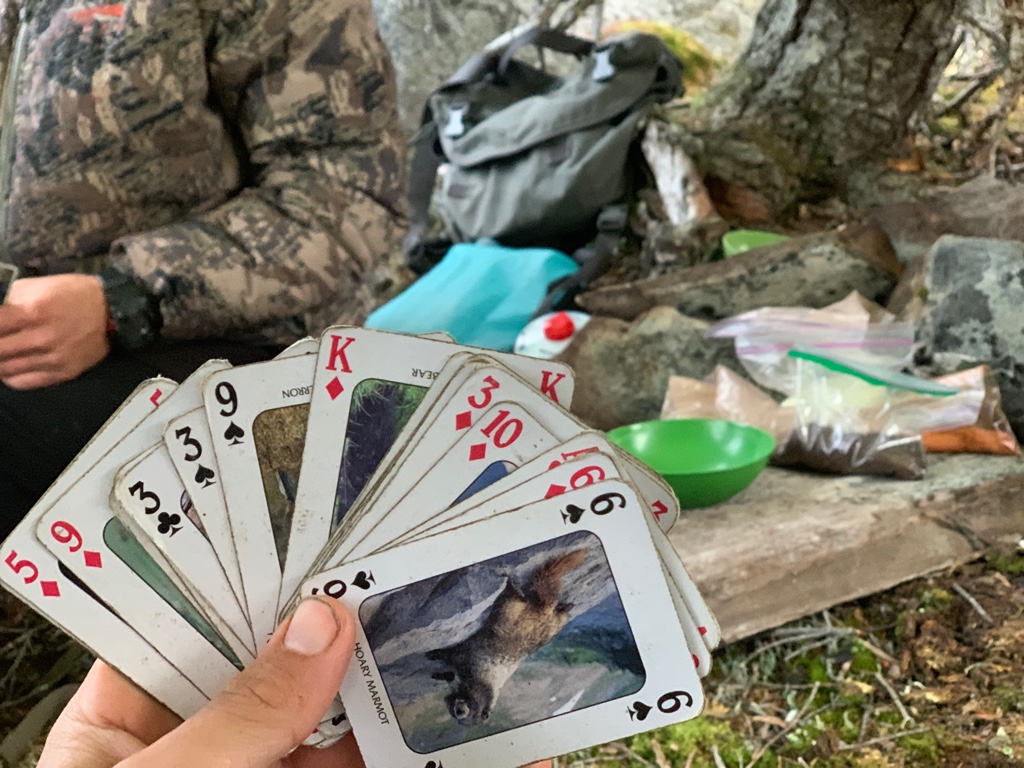 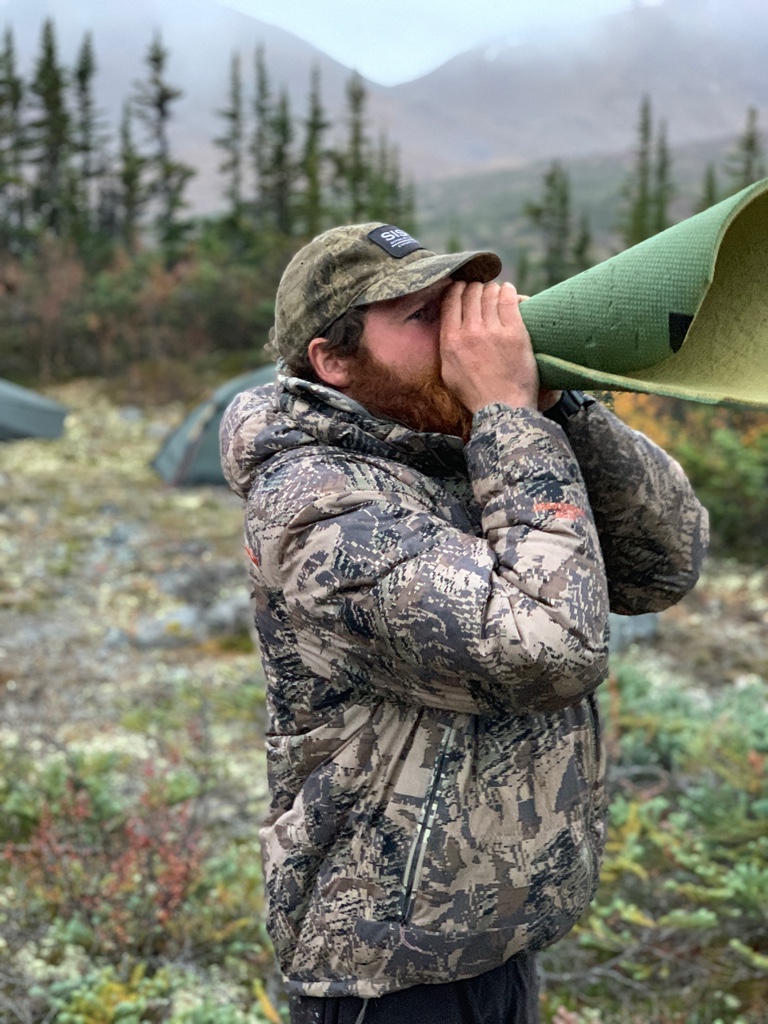 The morning of day six we woke up to thick fog that damn near came down the valley floor, where we were camped. This forced us to back down from chasing after the caribou we’d found the night before. We hunkered under a tarp and played cards and drank hot drinks waiting for the fog to lift. In the middle of our game I heard something that I just couldn’t get out of my head. It wasn’t rain or wind or anything else, it HAD to be a critter. I was sure. I told the boys and they concluded that I was full of shit and was going stir-crazy after sitting under a tarp for the last three days. We finished our game and I refused to play another until we all peeked around for a bit. Not 10 seconds after we got up Callum spotted a bull moose thrashing a tree about 500 yards above camp. After three days of lounging and glassing and calling, it was a mad dash to get the rifle and a pack loaded with enough clothes to serve as a rest. We got set up and called the bull into 300 yards, though, it’s as if he knew what was up because he never once presented a shot. He always kept a tree or a bush or a rock in front of his vitals. He disappeared and we stayed put and kept calling, against my wishes. He must’ve done a loop because 30 minutes later he popped out in nearly the exact same place right at 300 yards. Good call, Simon. Something just wasn’t right to him and he disappeared again. This time, though, we took off after him. Simon and I came over a rise and there he stood. At 150 yards he was walking dead away. I crept up to a waist-high rock and Simon stayed about 10 yards behind me. The boys voted my cow call sounded the best so I got to work calling as I wiped the fog out of the scope. Immediately the bull turned around and closed the distance to 100 yards, but again, he became disinterested. Simon saw this and let out a couple of bull grunts. Game over. The bull flipped around and walked in as dominant as you could hope; grunting and running over every tree he could. Attempting to circle above us he walked into a 4 foot hole at 80 yards, and I wasn’t waiting any longer. The .300 win mag barked. As the smoke cleared I remember intently listening for anything after the report and only hearing rain. One shot into the boiler-room and he flipped over backwards; DRT. He was massive. It took three full-grown men try multiple tries and a lot of grunts to maneuver him for pictures; a nod to the 5 mile pack-out we were about to do. After pictures we got to butchering. I can’t tell you the number of deer I’ve butchered by myself before, but I’m positive there’s no way I could butcher a bull by myself. I’m sure there are guys here who have; you are more man than me, my friend. A rear quarter alone easily weighed north of 100lbs. Easily. We butchered in the rain for three hours. By the end of it I was soaking wet, shivering and barely able to think straight. What happened next was one of the most professional guide moves I’ve ever heard about, and possibly saved my life. I wanted to get on the trail and get it over with, and was adamant I’d warm up. Simon wasn’t having it and forced me to get into my sleeping bag. Only after I started to warm up did I realize how cold I really was-my stomach and groin were very cold to the touch. Meaning, my core was getting cold and I was approaching hypothermia. Side note here: I’d never hesitate to hunt with Simon Buschl or Callum Rogers anywhere, ever.

We loaded our packs with camp and 50-70 lbs each and got to stepping. It took us 4.5 hours to cover the five miles back to the cabin and we were whipped. We still had just over half a moose hanging in a tree five miles away. 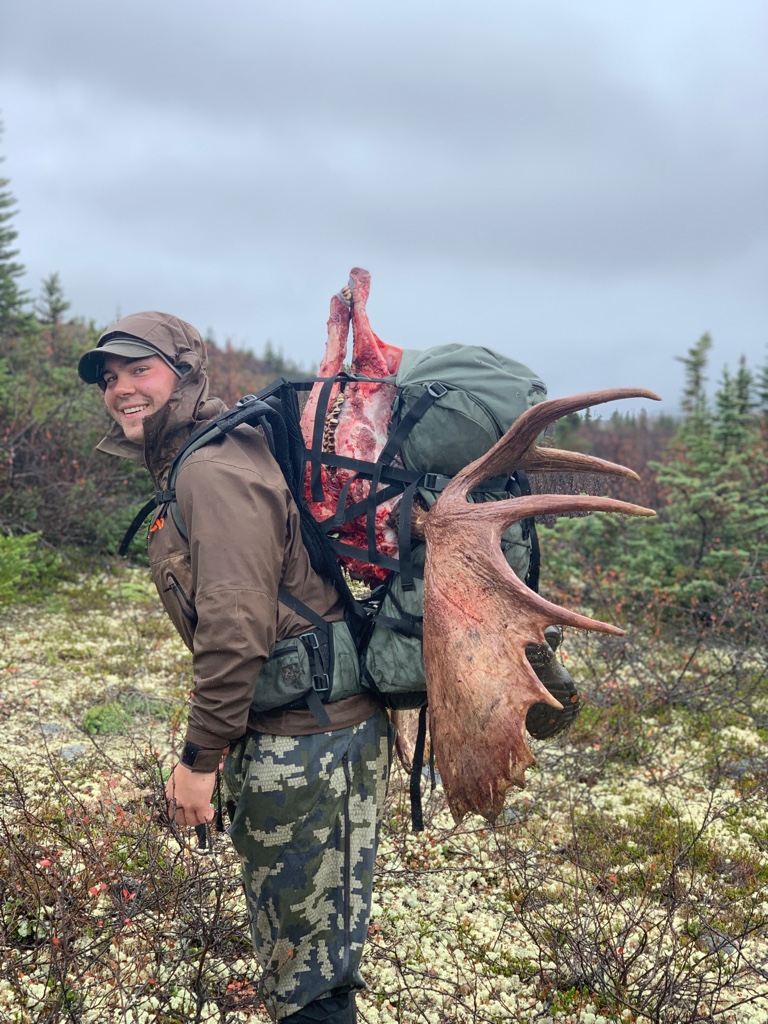 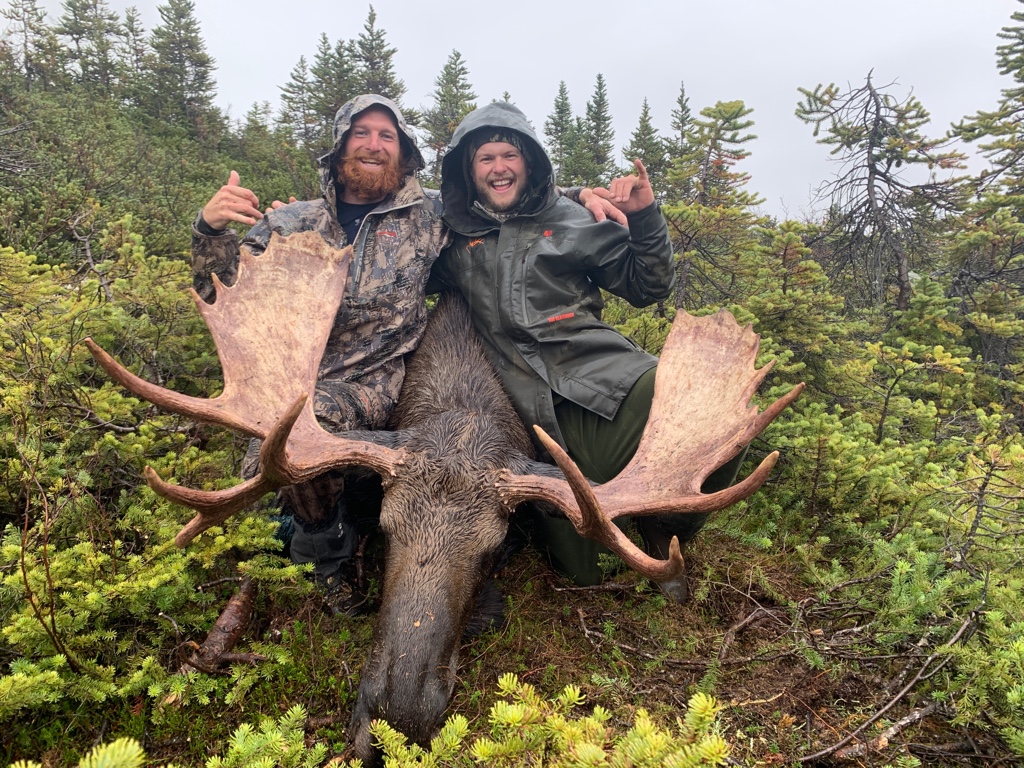 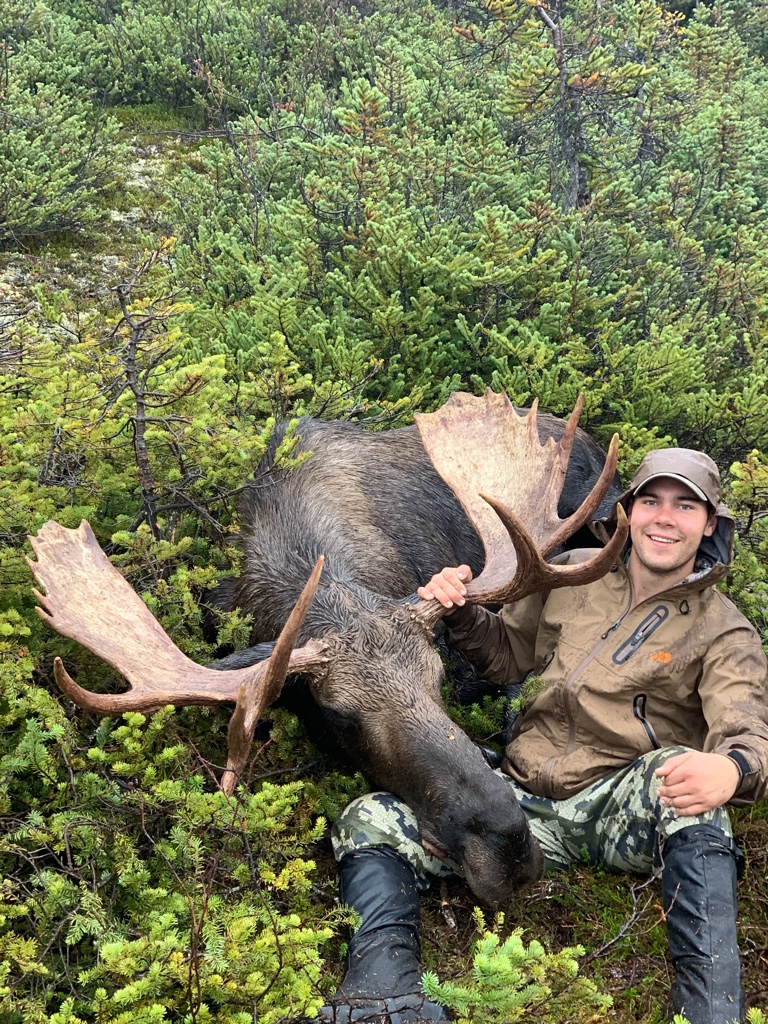 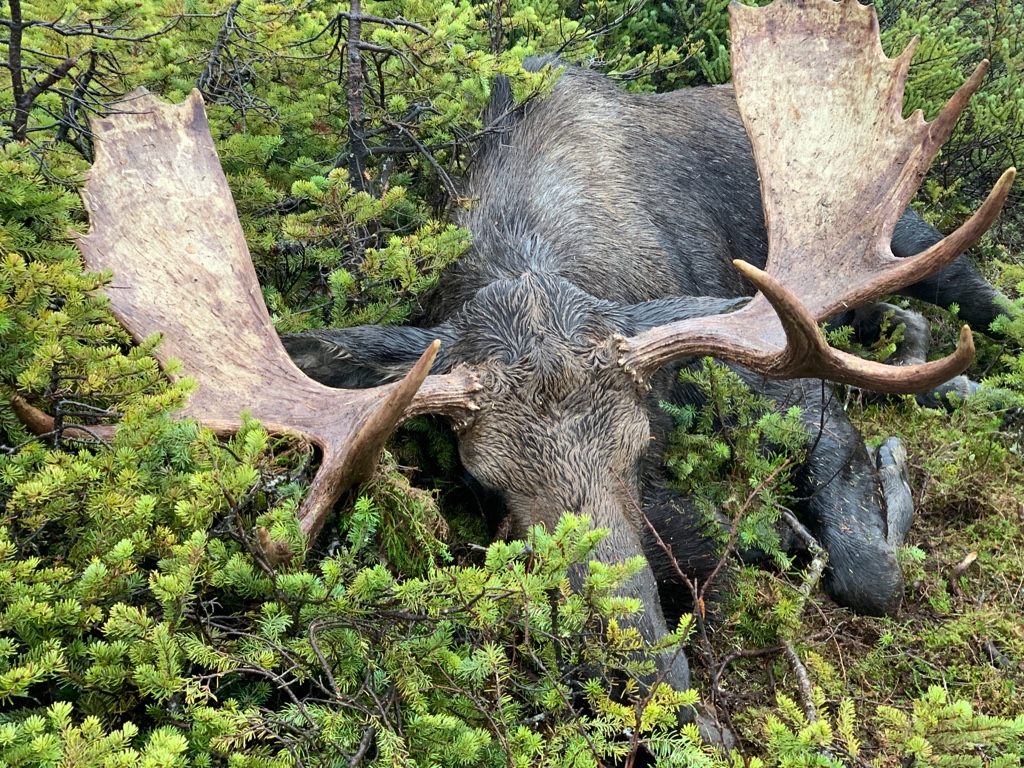 awesome man thanks for sharing!
OP

I keep forgetting to update this thread, I apologize!

I wrote a story for the Journal of Mountain Hunting that (I think) will finish this thread out nicely. Click here for the article and let me know what you think!
K

Well written article the ups and downs the pain the joy of hunting .a lifelong dream reached only to plant the seed of the next dream to go after. I've never regretted the time and money spent hunting.
Best of luck John
OP

keller said:
Well written article the ups and downs the pain the joy of hunting .a lifelong dream reached only to plant the seed of the next dream to go after. I've never regretted the time and money spent hunting.
Best of luck John
Click to expand...

Thank you for your kind words, John.
F

Story is awesome so far, post the rest!
R

Great write-up and pics!! I worked for Ron back in the early 2000's in his WT camp. Fun guy and seems like their outfit in BC is doing amazing lately!
V

We woke up to rain and fog, and the looming knowledge that we had half a moose five miles away. We trudged along in our rain gear for a few hours, stuffed our face full of pro bars and packs full of meat, and turned around. Nothing exceptionally special about the rest of that journey other than my damp boots thrashing my feet. Whether you want to call it fatigue, stupidity, or stubbornness is up to you, but I simply didn't care for the time being. After we arrived back at the cabin I gingerly pulled my boots off to find two bleeding blisters on my heels, the price of admission, I guess. We raised Ron on the inReach, and he agreed to come fly out some meat to ease our burden.

When he arrived he jokingly told me it was time to go kill a caribou. Now, I had no intention of killing a goat, moose, and caribou, but you put a man in a sportsman's paradise like BC and things just happen. Ron and I came to an agreement on the airstrip and we were officially Caribou hunting!

I took the rest of day seven taking care of my feet, resting, and helping with the chores around the cabin (the ones they'd let me, anyway).

Day eight started with us loading our tents into our packs and climbing a mountain behind camp. We set up our tents and climbed another mountain. We had seen caribou every single day of the trip so far, and were fairly certain today wasn't going to be any different. Towards the end of the day a nasty snow storm blew in and forced us to the tents. Ultimately, we spotted black bears, wolverines, legal rams, and ran a grizzly out of camp, but no caribou.
Last edited: Apr 30, 2020
L

Though we weathered a pretty nasty storm that night, we woke up to blue-bird skies. Simon, still laying in his sleeping bag, opened up the vestibule on his side and started glassing the hillside opposite of us. "Holy shit, mate", he said, "there's a bull right there!" He had my attention. Not being able to pick him up with my binos I asked him if he was one we should go after, he slid the spotter my way and said "see for yourself". I only needed one look to find my answer. Still in our boxers we donned our boots in our tents trying to stay hidden from view, and took off after the group as they went over the saddle, hoping the water it held would slow them down a bit. As crested the saddle we could see cows. We scrambled to throw down a pack and get behind it for a shot. It was chaotic, and the bull's curiosity slowed him to a trot. I remember hearing the tell-tale hollow thud, running the bolt, and trying to find him again through the scope to no avail. "Where'd he go, where'd he go?!" I said. I put one slug through his lungs at no more than 100 yards and it was over. He was dead in seconds. Callum and I worked together to quarter the bull while Simon went back to camp to grab some food. We were just finishing up as he came back. We sat there with hot chocolate, celebrating the last 10 days and our new lifelong friendships. That moment is cemented in my mind, and will be forever. We packed the bull to camp, loaded it, and humped everything back to the cabin in one load. Compared to the moose, this was a cakewalk and we laughed and told jokes as we made the two hour trek.