Figured I’d go ahead and start a new thread for 2020 coyotes.

I’ve shot 8 coyotes so far in 2020. My main hunting partner and I have combine for 15 so far this year. I don’t always take photos but here are a couple quick pics of the last two dogs.

Deer season are over so it's time to det after the dogs.

I deleted my still pic by mistake but here is a video from the bait station. Been slow for sure.
https://youtu.be/DwTDLaTs9as

Wyoming, spotted him from the road and he made the mistake of not vacating the area. Only had a head shot, the .204 did a real number on his noggin. 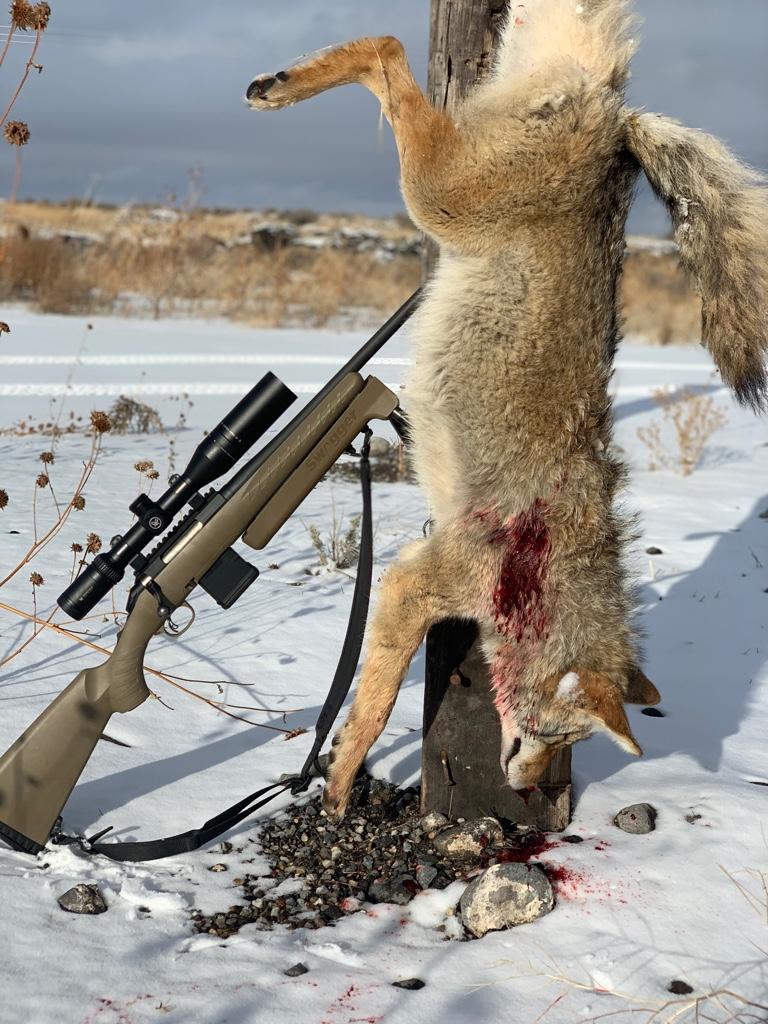 Hard to beat a good day of calling

bow_hunt32 said:
Hard to beat a good day of calling
Click to expand...

Nice work! Where did you hunt this group?

mxgsfmdpx said:
Nice work! Where did you hunt this group?
Click to expand...

I've got 3 since the first of January. Just shot the last one tonight, I had time for one long stand after work. I watched a coyote completely ignore both sounds I tried as he trotted down the ridge at 490 to 450 yards. Knowing this was a good spot I didn't want to take the long moving shot so I let him walk. About 10 minutes later a second coyote popped out at about 70 yards from me, 30 from the E caller, and started circling downwind of it. When he stopped I squeezed the trigger on the AR and heard a CLICK. I quickly chambered another round as the coyote circled further. I tried again when he was about 40 yards from me and heard another click. The coyote took off at this point. I got another round in and took a shot at him at 180 yards. The gun went off finally and I hit him to far back. He was still running so a final shot at 220 yards finished him. It ended up being way more of a rodeo than it needed to, but the coyote still wound up dead. It was by far the coldest day I've hunted and I'm betting that's why the AR didn't work. Both ejected shells show really light primer hits, guessing maybe the firing pin has some old oil in it that gummed up. Time to clean the AR.

This was my first hunt with the Burris Eliminator III I put on the AR. The rangefinder worked fine on the coyote that trotted down the ridge, and I never used it on the one I killed. It worked good to range back from where the blood trail started, and where he dropped to where I shot from. I think it will be nice to have with the slower, heavier, load I use in the AR for the coyotes that hang up. Less movement to range and shoot. I'm running the Hornady Superformance 73gr ELD-M at 2785fps from my 20" barrel.
S

Not sure where you are but a few of those are some pretty and pale coyotes. That last one is ugly tho. Nice work.
OP

mcr-85 said:
Not sure where you are but a few of those are some pretty and pale coyotes. That last one is ugly tho. Nice work.
Click to expand...

Yeah man. They look like the coyotes I’ve shot up in Northern Minnesota. Such light colored fur compared to the dogs at home in California.

I have been having a rough time catching anything lately. I don't have many traps out. I finally caught another coyote last night. He was blind in one eye.

I'm up in northern Colorado. We have some really good coyotes around here. I cashed in 14 of them Jan 7th and brought home $765. Whole coyotes on the carcass! 1 brought a $100 bill and 6 brought $75 each. Prices are good currently. I have 4 to sell right now but I'm Going to get on em this weekend again. Hope to have another 10-15 by Feb 7th
OP

No, I'm in Southern Utah, around Cedar City.
OP

I was close haha. That’s a really cool area! My wife has ran barrels in the Cedar City pro rodeo over the years. Fun place!
T

Sykes said:
I'm up in northern Colorado. We have some really good coyotes around here. I cashed in 14 of them Jan 7th and brought home $765. Whole coyotes on the carcass! 1 brought a $100 bill and 6 brought $75 each. Prices are good currently. I have 4 to sell right now but I'm Going to get on em this weekend again. Hope to have another 10-15 by Feb 7th
Click to expand...

That's impressive, nobody around here pays for them as far as I know. They also aren't nearly as prevalent as what you're seeing. In the past few years I've only seen two while deer hunting.

I've been giving mine to a friend. He said last year he got anywhere from $5 to $50 but that was put up right, not on the carcass. I might have to cash in myself if they are anywhere close to your price, I'm in KS. They aren't as pretty and pale as those though.
You must log in or register to reply here.
Share:
Facebook Twitter Reddit Pinterest Tumblr WhatsApp Email Link