I got this one Saturday night. Didn’t think I’d find one but got lucky, Tons of moose activity and now my freezer is full again. This one is about 50”. Not a huge one but I got meat.
Click to expand...

Am I the only one not seeing the pic in this post?

Congrats on the moose!

AKBorn said:
Am I the only one not seeing the pic in this post?

I saw it yday... not there for me today.

Our first moose hunt. Saw a monster but was out of reach for us. Learned alot of stuff on this hunt. Biggest lesson learned is we will never line, carry, drag a raft 4 miles up a river ever again. Took us 8 hours and more cuss words then you could think of. Whole reason we did it was because we thought atvs couldn't get there. That was wrong found a trail right after we set up our tent.

2nd lesson, dont always trust google earth especially when there are alders around 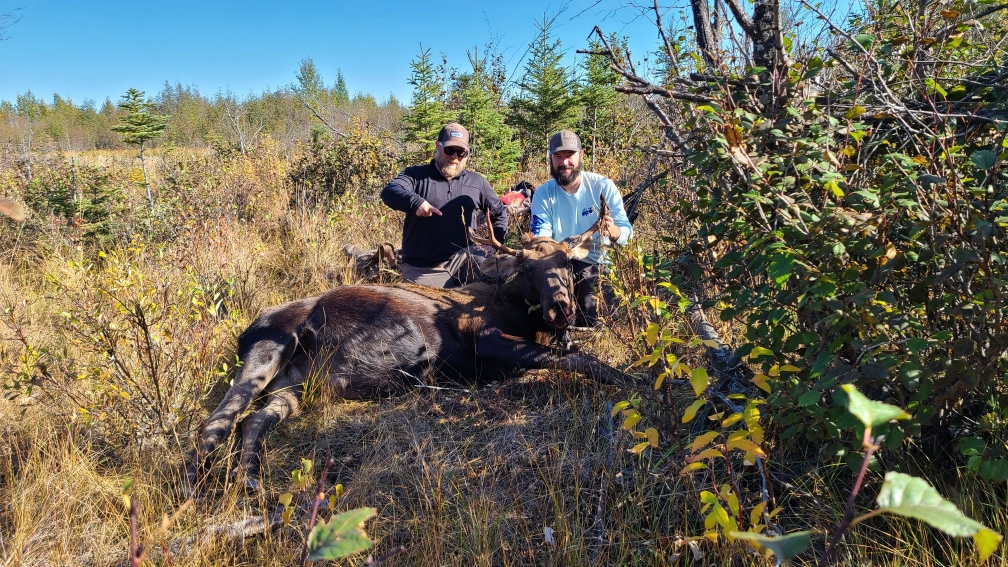 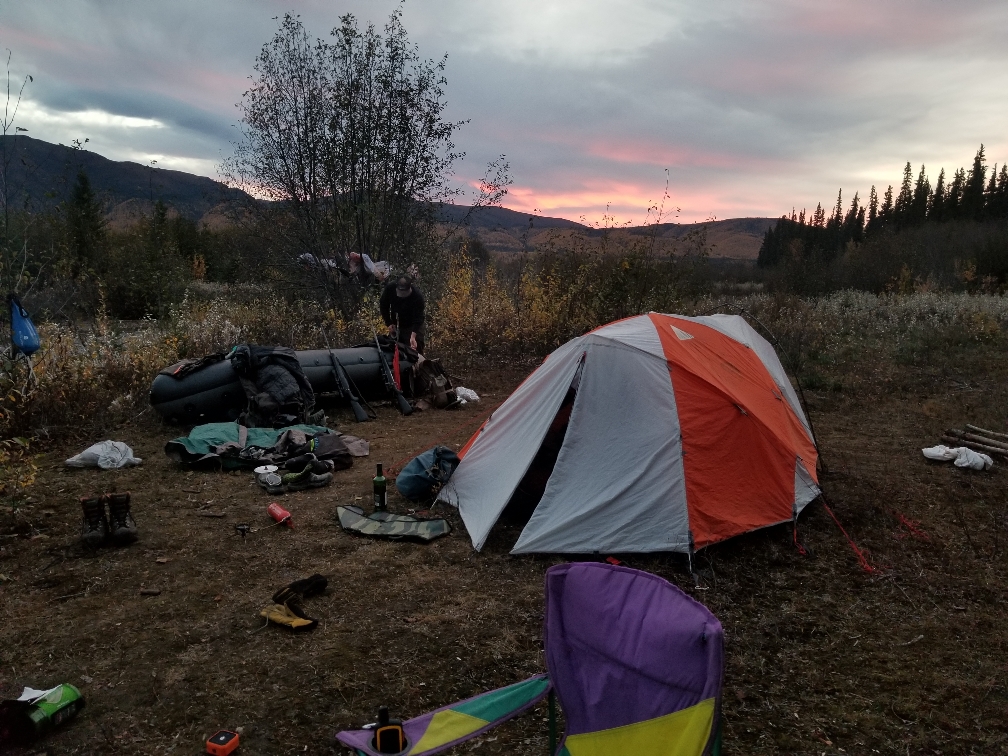 Sent from my SM-G892A using Tapatalk

Congrats on your moose, sounds like you earned it!

Did you kill that bear?

Called this guy from over a mile out right to the trail yesterday. Caught a break with the troopers as he turned out be 49.5.

Firemedic710 said:
Called this guy from over a mile out right to the trail yesterday. Caught a break with the troopers as he turned out be 49.5.
Click to expand...

They let you keep him? I've heard second hand horror stories, but glad they acted reasonably and let you keep the meat.

We hunted the last 5 days of the season, bulls were spotted every day but nothing that was legal. Went to one of my favorite glassing spots and found a legal bull in about 30 minutes of glassing, partner got within 50 yards of him in the brush but only had a head shot and chose not to shoot. Next day we went up the drainage where I thought the bull might be hanging out. Sure enough, after 5 minutes of glassing I spotted his left antler palm sticking up out of the brush and he was with the same cows from the day prior. We watched him for a good 30 minutes before I told my buddy to go hide in some trees about 200 yards below them and take the shot should one present itself.

I continued to watch the moose who were obviously in pre-rut, the bull would dig a rut pit, piss in it several times and one of the cows would walk over and lay in it while he chased some of the other cows. A smaller bull (40"-+) showed up and would challenge the bigger bull but would run off any time he got close. Then the big bull walked into the timber and I thought that was the end of that and so did my buddy. As I was walking back to my sxs I turned to glass the area one more time and saw that the bull had returned and before I could blink I saw his back end go down then the loud bang from his 300 win mag (180 yards ranged). The bull dropped like a sack of potatoes and was dead before he hit the ground. It was his first bull moose and a pretty decent bull at that which taped out at a little over 52"s. I have shot my share of bulls over the years so I wanted him to take it, I would be happy just to get some meat so we both succeeded that day.

Gunnersdad49 said:
They let you keep him? I've heard second hand horror stories, but glad they acted reasonably and let you keep the meat.
Click to expand...

Yes, he let me keep it. I Self reported, I was up front and respectful explained why I thought he was bigger showed him the pictures and video that led me to that conclusion and he cut me break. He told me as long as hunters self report, especially while still in the field and as long as you don’t have a track record of sub legal kills they will work with you. 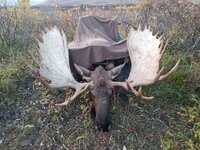 My buddy took this nice 65" bull this year! Came in hot and went down with one shot with the 7mm Ultra Mag at 260 yards. HE was a big bodied bull, largest I have seen and I have seen quite a few over the years. I had to weigh his hind quarter, this is the whole leg on the bone cut off at the knee. 149.4 LBS! Thank god we were able to get the 6 wheeler right up to him. Pretty cool battle scar tissue all over his nose. 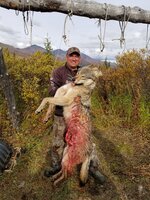 Also got my first wolf at moose camp this year. Caught this one coming off of a caribou gut pile, 270 yards - .300 win mag pushing 212g Hornady Eldx's

Firemedic710 said:
Called this guy from over a mile out right to the trail yesterday. Caught a break with the troopers as he turned out be 49.5.
Click to expand...

Measure it next week and next month.......the difference may surprise you.

I fortunate enough to harvest this bull this year! I shot once while he was on land, he started the wobbles, then took a death jump into the lake, which made an already difficult job even harder! 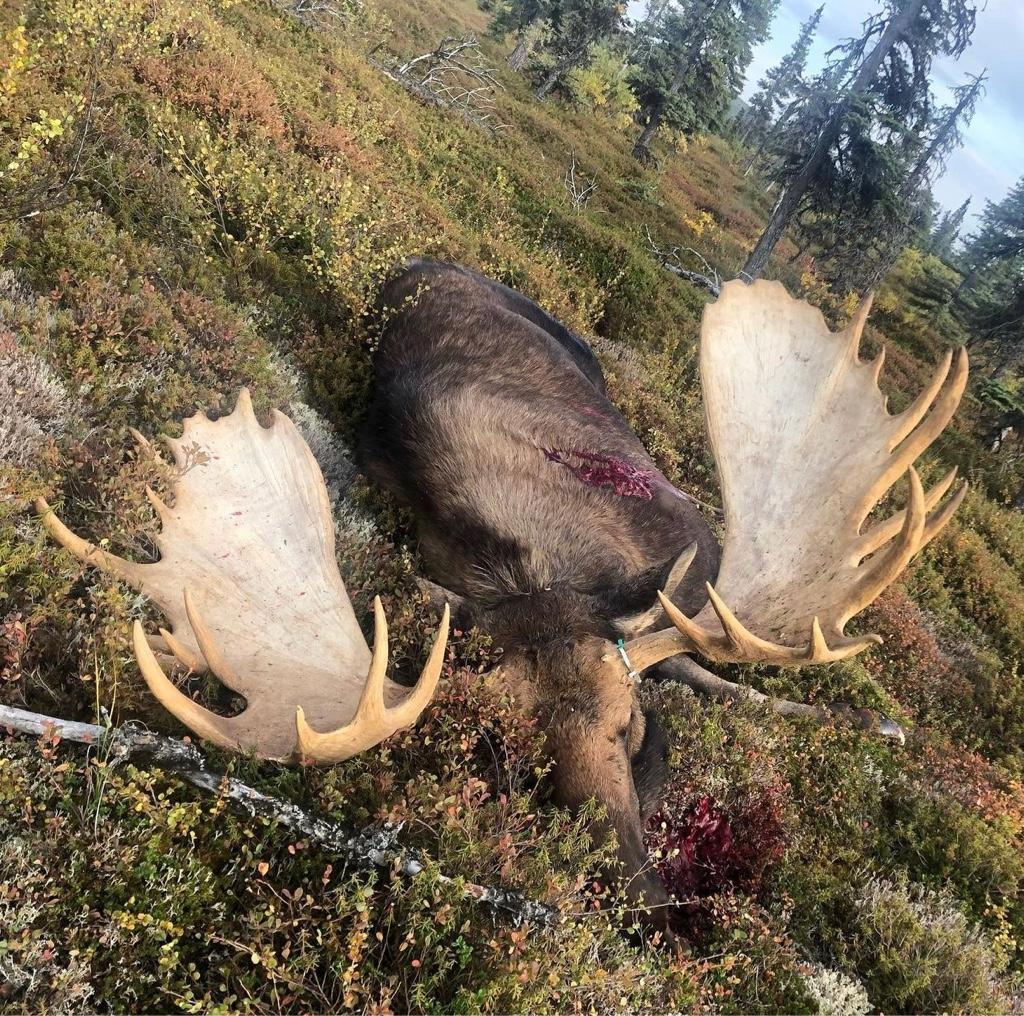 We went 1/3 in Alaska. My brother got this one.

We went 1/3 in Alaska. My brother got this one.

Heck of a bull! What was the width on it?

VernAK said:
Measure it next week and next month.......the difference may surprise you
Click to expand...

An old timer told me about this while I was out there! Told me to be careful with those barely legal ones if your gonna be in camp for a while. On the flip side He was also telling me that you can make them swell by hydrating them In a pond
H

decrooj said:
Heck of a bull! What was the width on it?
Click to expand...

WOW! That is very impressive!!!

Sure glad some of you have understanding hunting partners hhahahaha. Thanks for sharing and congrats all!
You must log in or register to reply here.