2021 was pretty good for Me my dad and brother.

My dad and bother Zac ended up drawing muzzy Vernon tags. We spent quite a bit of time out there this year but didn’t find anything giant to hunt since it was a rough year out there. So they decided that they would make the best out of their tags and just make sure we had fun.

Opening day we split up. I took my dad and Zac went to another spot. Zac ended up seeing a lot of 140-60 bucks and passed all of them. Me and my dad glassed up a couple solid bucks so we went up after them. I got to where we could shoot and got the tripod set up so my dad could shoot off. Had 3 solid bucks broadside for 15 or so min. My dad had not showed up yet. I went back around the draw and he was still the ravine behind me. So I sprinted to him. Told him to drop all his stuff and hurry up. I grabbed his gun and sprinted back to the tripod. Got it all set up. One of the bucks had fed over but two were still there. My dad got to me 5 or so min later. Got the gun dialed and as soon as he was going to shoot both of them busted. Went back to the Sxs and spent the rest of the day glassing and looking at smaller bucks. 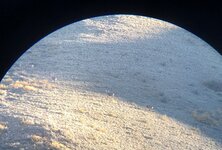 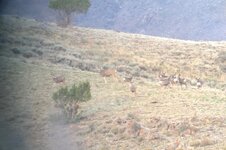 Day two my dad woke up with a sinus infection, we decided to go back to
Where we had seen the bucks the day before. Right at first light we had 6 bucks. One of them being the best buck in the group was headed over the ridge Zac made a quick decision and shot him. Hit him just a little back. Followed up with a second shot and blew his antler off! I told him “YOU SHOT HIS ANTER OFF!” He didn’t believe me until he pulled up his gun to check! He went into some thick buck brush and didn’t come out. So Zac loaded the muzzy and we went in. To our surprise the buck jumped up with his lungs hanging out of him and ran. Zac put another one in him and he dropped. We got pictures then me and my dad took off while he broke it down. Me and my dad went up the road 3/4 of a mile or so and stared turning up more bucks. After looking over a bunch of them and going back and fourth over which deer to shoot he decided on a buck that had bedded 300 yards away. He took the shot and smoked him. 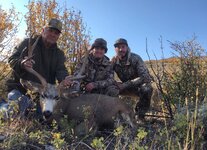 Finally got to hunt for myself this last weekend. We got out to the property and met up with the operator. After talking with him he told us to go drop our camp and he would run us around to show us where he has been seeing deer. We went for a couple hour drive with him and when we got back he told us that we could hunt that night (we were planning on hunting in the morning). So we unloaded the SXS and headed out for a couple hours just really riding around to a couple areas to see where we thought we should hunt that next morning.


Zac glassed this buck from on top of a mesa 2 miles away. Him and another buck were headed down to a big group of does. Looking at his back end we figured we needed a closer look at him. By the time we got down to where they were when we last saw them all we could find were the does and 10 or so smaller bucks. Glassed and glassed trying to turn him up and couldn’t. So we went down a big wash that we thought they might have went down. We saw a couple does and cactus bucks and were looking at them when Zac says BIG BUCK GRAB THE GUN! I just laughed at him and he says it again all serious. So I grab the gun and get set up. Him and the other buck start feeding up a mesa at 200 yards. As soon as I got him in the scope I knew he was good enough to shoot. I held it together long enough to make a perfect shot! Me, Zac and Dad have had a lot of fun this year hunting. I am lucky to be able to hunt with them! 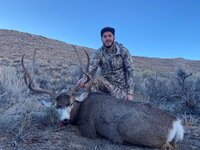 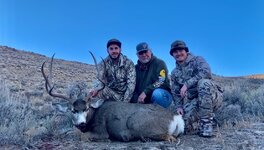 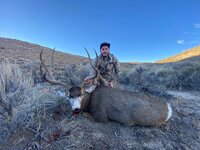 Some really good bucks thanks for sharing your hunt with us

Awesome bucks for sure congrats!

Awesome pictures and Congrats!
B

Congrats them are some good bucks!!
OP

Nice work ! Thanks for sharing
You must log in or register to reply here.