Firestone Destination M/T2 or X/T. The X/T has a 50,000 mile warranty and you can run both of them for 90 days and if you don't like them return them.

I had Duratracks the last two winters. For an aggressive tire I found them quite decent in our dry interior snow, but they had noticeably less traction by 20,000 miles and are retired to summer duty.

Mounted a set of Cooper “Snow Claws” this year as dedicated snow tires. They blow the Duratracks out of the water in both ice and heavy snow. We had 14” in one day at the house last week... no problem at all. Load rated E as well, which is rare in a winter tire.

I had never heard of Nokian Haakapeliittas before. To me, they don't look like an offroad tire in any respect. I would expect them to turn into street slicks when it gets muddy.
However, I readily admit I don't know anything about them other than a quick google. They appear to be street biased snowshoes. ??

BadBrian said:
I had never heard of Nokian Haakapeliittas before. To me, they don't look like an offroad tire in any respect. I would expect them to turn into street slicks when it gets muddy.
However, I readily admit I don't know anything about them other than a quick google. They appear to be street biased snowshoes. ??
Click to expand...

I had those Nokian LT2’s on my last truck. A very decent snow and frozen ground tire. The soft compound gets great traction in those conditions. Not a mud or gravel tire at all.

So far I’m liking the Snow Claws better though. They don’t wander as much on pavement and ice.

A different tire to look at. I know coopers seem to get pretty good feedback and they are on my shortlist.

I'd be looking at an MT as well to get something with more agressive treads. I'm finishing up my last set of BFG and will be making a switch somewhere.

I run the Nokians in the "winter", no better snow/ice tire out there imo; gravel/dirt/mud- I run the KO2's (probably 7-8 months out of the year)

There's been a couple times I've been a little lax in swapping in the Nokians and have had a couple of puckery experiences that I wouldn't have had with them on.

This year our "winter" came very early- lots of snow (and cold) starting in October- I was quick to swap out tires this year and glad I did. The roads leading up to my elk areas where snowpacked and icy almost the entire season. Never had to chain up, but lots of folks I saw did
D

I have been looking into tires the past couple weeks, probably going with the toyo open country at3, it is triple snow flake rated.

dtrkyman said:
I have been looking into tires the past couple weeks, probably going with the toyo open country at3, it is triple snow flake rated.
Click to expand...

I’m running the toyo oc at3 and am impressed with snow handling so far both on and off-road.

I have BF Goodrich All Terrain TAs on both my Jeep and my work truck. I was routinely driving from Boulder to Steamboat on a weekly basis for work for about 2 years and never once lost traction on Rabbit Ears pass or any other road during any snow storm. I've been using them for about 28 years now and I wouldn't pick anything else.

Hakkapeliitta’s here in Alaska on both my Tacoma and Lexus GX. Far and away the best winter tire I’ve ever used. Great breaking traction and both vehicles corner like on rails. I hardly ever experience any under steer, which is common with other tires I’ve tried in the past.

Don’t have experience with the duratacs but will peak at3s have served me well in the past. I would also recommend BFG ATs have done great in the past and have them on my current truck.
OP

Would I almost be better off siping my current wild peak mts?

Thanks for all the replies so far guys

I love the BFG TA KO2's. They are snow/ice rated and tough as nails. I used to get side wall slashes and punctures all the time until I switched to the KO2's. I haven't got a sidewall slash since (6 years now). During elk season and extra trail and two track hours, I deflate them down to 21 pounds and ride them like that for 2 weeks with no problem. Takes most of the small bumps and vibrations out of the trails even when I'm driving it like a race quad. I also noticed the Game and Fish field officers near Gunnison had the KO2's this year. If you're doing more snow and ice than anything else for an extended period of time (months), you might be better off using a dedicated snow/ice tire during that time and switching back afterwards.
B

Ive had Falken Wildpeaks for 3 years now. Have put them through some pretty serious conditions and they've done great.

I have ran both and still currently run the wildpeaks on all my rigs. Went from duratracs to st maxx to the the at3. They have been a great tire

Sent from my ONEPLUS A6013 using Tapatalk
J

I've ran Cooper Discoverer ST MAXX's on my last 2 trucks. Run great in all weather but they are a little noisier.

For winter tires, haks are where it's at.

For snow tires, pitbull makes a great tire, very wide for height. Most guys up here run mickey Thompson Baja claws or iroks. 600hp+, 42"+, and stay up on top. 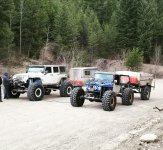 As you can see, they're very practical. Plenty of room for groceries, and easily tow an RV if needed.
J

For you guys using Falken Wildpeaks, are you using these on 1/2 ton pickups or 3/4 ton? I've had the 3/4 ton on my work pickup and they were great, but had a co worker tell me the tread is too hard for 1/2 ton pickups. Not sure if I'm overthinking it, or there is validity in his statement. Thanks for the input.

jmav58 said:
For you guys using Falken Wildpeaks, are you using these on 1/2 ton pickups or 3/4 ton? I've had the 3/4 ton on my work pickup and they were great, but had a co worker tell me the tread is too hard for 1/2 ton pickups. Not sure if I'm overthinking it, or there is validity in his statement. Thanks for the input.
Click to expand...

Not sure about the wild peaks, but now that you mention it the Colorado game and fish officer told me he loved the BFG TA KO2's on the half ton trucks, like i do, but he said that the 3/4 ton trucks chunked out the tires some on the rough rock trails.
B

Nothing I hate more than paying retail for a set of tires! I have (2) diesel 3/4 ton pickups that tow, so they require E-rated tires as well. In my 35 years of driving, I've got myself in a couple of sets of jams by pushing the envelope with chitty skins though too! So, anymore I try to look throughout the year for a good (used) set of tires and when the right deal comes around, then I capitalize (plus I enjoy looking online).

I have the Wildpeak AT3's (265/75/16 on stock wheels) on my kids '02 F250 Superduty, ext cab/short box all original. My dad bought the pickup new, and it's in good condition for being almost 20 years old. The AT3's were basically "new takeoffs" when we installed them in October 2019. I drove the truck until January of this year when he got his license, and I was really impressed with the tires! They've got 15000 miles on them now and we haven't even rotated them yet. I keep saying we need to, but they wear great, handle and ride fine tool. Here in central Wa St, we get "some weather" but honestly but for what we do the A/T's fit the bill just fine. I hunted out of that truck from Oct till December last year as I had a late tag, but we had no real snow in November. He skis and we live at the edge of the Mtns, plus he drives to town every day (15 miles one way), so for general A/T tires..couldn't be happier! And I paid $100/ea, LOL Wouldn't hesitate to own another pair!

My other truck is a 2019 3/4 ton duramax. I really regret not swapping out the new 20" tires/wheels with a set of 18" tires/wheels off another new rig! Did I mention how much I HATE buying tires? Lots of 18" tires available, but 20" is just an oddball to me! Well...I just spent the last month looking for 20" A/T tires in the standard size of 265/60/20. New Falkens were around $1200-1300 + mounting. I bought a used set for $200 that were just "eh", (here I go getting myself in trouble again LOL) Then a week ago a set of new/used Nitto's (name was new to me, so I did some googling) showed up locally in 275/60/20, load range E. The guy wanted $600 or trade. I traded him a scope I had $200 into, and my local dealership mounts them for $12.50/ea. So far they have more road noise than the stock Michelins, but those tires were useless otherwise. I'll eventually change to 18" wheels though, as they just seem more common with way more tire selections.

I'll sell the stock tires, and this summer probably swap/wear out the Falkens I purchased. Yeah, I'm cheap (prefer the term "frugal" LOL), but if it saves me some coin and then I can put that money towards Idaho tags for the boy and me, that makes me smile.
You must log in or register to reply here.