Anybody used or using 6.5 Grendel long range for mule deer?

Depends on what you consider long range, but I have taken three animals in three seasons with with mine.
Only one was a mulie though, others were pronghorn

Ive shot whitetail and a coyote with mine. A buddy has shot a nice black bear.

What's your questions about it? What is long range to you?

I don't get caught up too much in the never ending caliber/cartridge analysis and debates at to what is better. A good 6.5mm bullet impacting at sufficient terminal velocity will kill a mule deer. Pick a good bullet for a grendel and if you can shoot the dope it is a dead mulie.

Not what I would recommend necessarily at what I consider long range, but it will certainly kill stuff inside 600 yards in areas they inhabit. If it is what a buddy had, we would load it up and get him confident as far as he could shoot it. If she were buying a gun, I would suggest something else unless her heart were set on it.

I am a facts and numbers guy. Here is the box velocity shooting the 123 grain SST, a bullet that is designed for expansion with the tip. The second one is a 6.5 creedmoor with 140 SST at a typical velocity. With minimum expansion velocity at 1600 fps, you can see limitations on distance. Also, look at difference at 650 yards between them. Drop is about 26 inches and wind drift is about 3 inches different. You can obviously hotrod either one of them, but for comparison, I use typical numbers. 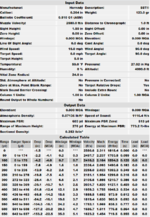 That's cool you guys are killing with it. I have always thought the Howa Mini Action Grendel is the perfect gun for a kid to hunt with or for a truck gun.

How far do you guys feel comfortable shooting it on deer?
J

Check out Maker T-Rex bullets and Cavity Back Bullets mkz. They are all copper bullets designed to open beyond double diameter with three perfect petals down to around 1500-1600fps. I killed my buck last year with a 110 grain Maker tipped T-Rex and it worked great. Only problem I had was the tips broke off a few of them upon chambering in my AR. They also have a non tipped version. I will be testing the 105 and 118 CBB mkz’s this weekend. They have been getting rave reviews for both accuracy and terminal performance. The 118 mkz has a .505bc which is crazy high for the Grendel. Either of the mkz’s should be good to at least 600yds. Traditional bullets used in the Grendel are good to a max 450yds imho. I have taken 3 deer with mine but have yet to go over 200yds. My daughters have been shooting my .264lbc AR for a couple years now with the youngest starting at 7 years old and about 55lbs soaking wet. My 10yo wants to try to shoot a buck this year so she will be practicing all summer to see if we can get her proficient enough. I will also be testing my new 6.5 Grendel AR pistol with 12” barrel and GHW tailhook mod2 brace. I have a leupold vx1 2-7x32 on there. Hoping to turn it into my ultimate compact backpack rig for deer out to 400-450ish.

Thank you all for your replies. This is all good information. I have killed whitetail here in the east with my 6.5 Grendel and I am planning on taking my 300 winmag this fall to hunt elk & mule deer in Colorado. I guess I am just curious as to how that caliber would perform out west. I can drive nails with the AR I built in 6.5 Grendel at 300 yards and it is really impressive, but feel like that caliber is a little lite for out there. And my AR weighs so much I probably wouldn't carry it out there anyways, but really like the performance.

Jesseb, I will check out those bullets as I do reload my own ammo. Thanks for the tip!

Hereinaz, thanks for the ballistics info. I normally shoot it the Hornady SST 123 gr. around here, if I am going to shoot factory ammo.

I am here in Colorado and don’t hesitate to take my grendel to hunt deer or elk with it. I know what it can and can’t do and practice quite a bit with it. It’s an AR platform, suppressed and a joy to shoot. I catch alot of flak from folks because “its not enough gun”.
O

justinspicher said:
I am here in Colorado and don’t hesitate to take my grendel to hunt deer or elk with it. I know what it can and can’t do and practice quite a bit with it. It’s an AR platform, suppressed and a joy to shoot. I catch alot of flak from folks because “its not enough gun”.
Click to expand...

What bullets are you using for the elk? I’m planning to have my son hunt with a grendel this fall and got some 107gr tmk’s to load but there’s not much info on results with that bullet in the grendel.

I have 129gr accubonds that I plan on using for elk.
S

Put it in the correct spot and you will be fine. I wouldn't hesitate to use it.
K

hereinaz said:
That's cool you guys are killing with it. I have always thought the Howa Mini Action Grendel is the perfect gun for a kid to hunt with or for a truck gun.

How far do you guys feel comfortable shooting it on deer?
Click to expand...

I used a 100gr Nosler Partition reload for my oversized blacktail deer last year.
Probably wouldn’t use the Grendel over 400 for big game to not enough velocity for reliable expansion.
120 Gold dot maybe an option for elk.
K

KLJ said:
I used a 100gr Nosler Partition reload for my oversized blacktail deer last year.
Probably wouldn’t use the Grendel over 400 for big game to not enough velocity for reliable expansion.
120 Gold dot maybe an option for elk.
Click to expand...

309 yards for that blacktail buck, DRT with that 100gr partition.

Dropped nearly everything in NM with 123g ELD-Matches in Hornady Black. Except bear.. even a cow elk (although that’s stretching it in my opinion.)
My custom 16” Howa drops 8” groups at 1100y. But… the wind will absolutely destroy you if you’re not exact.


I have the Howa mini action grendel. will be letting my 11 year old son use it for deer this year.
L

I've never used it on Mule deer but it's deadly on whitetail and pigs here in Texas! I'm betting it would do the job inside of 300 yards if shot placement is on point.
T

It's worked great with the 123 sst's on whitetails down here in South Texas.
Wouldn't hesitate to use it on mule deer as long as the distances weren't too great.

Have not killed any critters at long range with my Grendel (20" bbl AR). Two mule deer and one pronghorn all at under 300 yards with 120 grain ballistic tips were quite impressed with it. Several coyotes as well. No doubt it would perform well at longer ranges assuming the velocity was within the bullets performance envelope. It would not be my first choice for elk if I had better options available.
T

hereinaz said:
That's cool you guys are killing with it. I have always thought the Howa Mini Action Grendel is the perfect gun for a kid to hunt with or for a truck gun.

How far do you guys feel comfortable shooting it on deer?
Click to expand...

I built one on a Sako.
Perfectly ok to 300, but at 400 I was starting to see "longer runs".
I believe the 65Grendel forum documented more than 500 kills in their hunting subforum and condensed it into a "distance shot vs distance ran" table. Takeaway from that is that the Grendel really kill well and the 123gr completely dominates as a hunting bullet.
S

myself and my two boys now have 10 head of big game here in Alberta with the Grendel and Hornady Black 123gr eld-m factory ammo, over 4 seasons now, average shot distance 213 yards average recovered distance 12 yards, 1 moose, 1 black bear, 1 bighorn sheep, 5 bucks (1 muley, 4 wt) and 2 wt does. no plans to change, not much will take that bullet in the ribs at 400 yards, I shot a fat doe at 420 this year from 16.1" barrel ruger American ranch chassis build launching at 2386 fps and impact at 1800 fps, went through middle of ribcage quartering away and exited after 15" penetration inside opposing front shoulder with a 1.5" hole and took out everything on top of the heart DRT, so I can vouch for if you can drive it well it will do the trick just fine

have documented it pretty well and set up a little instagram page with plenty of pics and data, go to @65grendelhunters to see more, haven't posted here in awhile, had to collect some information and pics for the last little while to bring something interesting to the table

we're batting 1000 so far, 10 for 10, surprising little cartridge and I'm all about that eld-m
You must log in or register to reply here.