Am I a jerk? (Read before voting)

So here's the deal last year was my son's first year to be able to shoot a deer, this year is his second year and he's pumped.

However my mother and father think I am a monster. . . All because I have a couple of rules for him.

Rule #1 no small mulie bucks (our mulie population is low and Forky's are dumber than a box of rocks, let them grow)

#2 until your old enough to sit alone Dad (me) is shooting anything Bigger than what I already have at home!

That's it, those are the only rules. My son is perfectly ok with this because he knows most years I'm not shooting a deer and he's going to get to shoot two bucks and a few does. He also knows in a few more years he will sit by himself and shoot whatever he wants. Basically I don't want to spoil the poor kid if some monster walks out, and I've put in my time and all the work for these spots I deserve a little something right? So let me have it am I jerk if I shoot a trophy buck in front of my kid when he's holding a tag?

For reference his white tail range is doe to about 150 inch deer and his mulie range is mature buck up to 170inch class.

To save 13 pages of reading and fill people in on the season I'm making this edit. Feel free to read through for the full effect or skip that and just read this and comment.

So this post (original) was made spur and in a bit of a smart ass manor. I don't intend for my kid to go find his own spots, and I take great joy in his successes. A better way or saying things would have been to say "would you let your kids shoot a giant early in their hunting career?". But once I posted it I didn't want to change it and skew the vote, and I really enjoyed some of the comments and dialogue, even if most was at my expense!

I have shifted my opinion somewhat due to suggestions here and will most likely utilize a different tactic if we come across this situation with a really big deer. They small Muley thing won't change as it is pointless to shoot one in our area with numerous whitetails to be found.

It's more reading but you can find how my son did this year here.

This was my son's second rifle season, and man has he been counting down the days! Starting in about September he had a running countdown on the family calendar and starting in October he was giving me daily updates on how many days until season started. So Saturday morning there was no...

I haven't harvested a deer yet this year but will probably take a couple does here in January.

Thanks to everyone that replied and voted!
Last edited: Dec 26, 2021

Agree with some of it, but in my circle who ever spots it is up to bat first unless they defer to someone else, regardless of size. In my experience certain rules cause way to much drama. I can still remember being 14 spotting a buck that was huge for our area and the old timer I was with said let’s move in closer so I could have a better shot. About five seconds later he let loose and that buck hit the dirt. Never hunted with that guy much after that.
Is he really ok with this or does he just not want to upset his father?
B

Your spot, your son is a guest in your spot, just as if you brought in someone else, a friend... so it's your rules.

So, yeah, he's a kid. Let him shot what the heck ever makes him happy.

I would let him shoot whatever legal deer or monster buck that comes by. It's not about who pulls the trigger when it's a father, son hunt. It's about the time spent with him in the woods and the experience. I say let him shoot them. I personally get more joy that way then having myself pull the trigger.
Last edited: Nov 3, 2021
R

In my world, it would be rare for both of you to have tags, and it would be ... unsavory ... for you to shoot any buck on his tag. I'm probably not going to make an friends here but you asked: The "I did the work ... I deserve" statement is selfish, not generic jerk. Children are selfish, parents are generous. Also, some sort of success is needed to hook a beginner on a new activity. I wouldn't be that hard on him for his first hunts. So let him harvest anything legal first, then work up to being a trophy hunter. If after harvesting a spike he comes out with you and sees a bigger buck, he'll learn very quickly to hold out for something bigger. For beginners the only rules are be safe and keep it legal.

Do whatever keeps him engaged and wanting to keep hunting. Also, maybe think about paying it forward so that when you are too old to get out by yourself he makes sure you still go out with him. He’ll be off on his own before you know it. Think about the memories you want him to have of hunting with his dad and go from there.
H

If my kid is pumped about hunting and excited to hit the field with Dad....he's gonna shoot whatever he wants to- his tags, my tags, big deer, little deer.

My son is getting older to the point that he's too cool to hang with Dad and he's getting his own life going. The critters he's shot with me mean a lot more to me than all the critters I've shot with or without him.

You get a very short window of time with your kids as kids, make the most of it.

I personally would not set either rule for my child. What comes along, comes along and provided it is legal and fair chase, he"d be welcome to hang his tag on it.

I'd let him get reps tagging deer. Small bucks eat just fine. Large buck comes along, I'd be very pleased if he hung his tag on it, even if it's bigger than any I've shot.

My ego is not nearly as important as the quality time, memories, and potential opportunity he might have for a buck of a lifetime. I personality would not be so selfish as to take that away from him.

My child's hunt IS their hunt. Not, their hunt until i see something i want, then it becomes my hunt. My purpose is to help them be a better hunter and a better human because of it. I personally can't see how those two rules would meet my goals.

Your kids, your call, but you did ask for an opinion.
D

I don’t have much issue with shooting a more mature mule but definitely let him shoot anything that is mature any whitetail he wants. We need the next generation. You will have plenty of solo years.

I can't wait for the day my boys are carrying their own tag in their pocket. I would like to think I could find them a little better buck than a 2 point and I would be ecstatic for them if they killed a buck bigger than I have.

Yeah I think that you're being a jerk. It's your kids hunt/tag not yours so who cares what YOU want?? Isn't it supposed to be about what makes them happy?
Last edited: Nov 4, 2021

Yep… your parents are right. My sons are 12, 14 & 5. I haven’t killed a deer myself in 5 yrs bc my first priority is to put them on bucks first. My 14 yr old has taken 2 bucks bigger than anything I’ve killed and I wouldn’t have it any other way. My oldest started hunting with me when he was 5. My 2 oldest earned the right to hunt solo for the first time this yr and they both tagged out this weekend… I was emotional about it and so proud of them both. They live to hunt and I know it’s a passion that will carry out through their entire lives. There will come a day when I’m dependent on them to take me hunting and I hope they treat me like I’ve raised them to treat others. I’ve always said that marriage has a way of showing us how selfish we are by nature… having kids takes it to a whole other level. Enjoy your time with your son, they grow fast and have a great hunt! 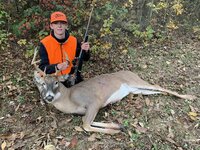 Once you start hunting with your kids or in my case grandkids, the " spot"becomes our spot and he always get first shot. Now days I get my enjoyment from seeing his excitement when he takes the shot..
C

There's a really good chance you'll look back at that decision and think to yourself you were being a jerk.

Jerk. My son is 19 now but still hunts with me. I still get more of a kick out of his success. Let him shoot what makes him happy and as others have said it goes by too quick.
G

One more thing on the topic, men are not jerks, they are, Aholes.
B

I can’t even imagine wanting to shoot a buck that my son would be able to shoot instead. Maybe I’m the selfish one, though, since I would have more fun watching him. My dad would do the same for me.
Also..let him shoot what he wants.

Not a jerk but your opinion will change. Been hunting with my boys now for 5 years and I don’t care how big the buck is, big or small if they want to shoot let them shoot. I’ve literally shot tractor trailer loads of deer, ans want to shoot more but it’s my kid’s turn to shoot first now. That being said if the deer is big and they are having trouble getting off a shot as the deer is leaving, I’ll take my turn.
You must log in or register to reply here.

a worthwhile read- The Comfort Crisis
2 3 4

Apr 19, 2022
RealMuddyboots
R
P
I was a recipient of good karma today.