I’ve shot 3-5 whitetails a year for the last seven years or so with this. Longest blood trail has been 40 yards. 90% drop instantly which is great for shooting multiple does from a group (here in Wisconsin we get a lot of doe tags)

Do you waste meat? Yes some. But if you’re hunting small parcels and other landowners don’t grant permission to retrieve animals in the long run you come out ahead.

Is it a smaller target? Yes.

Meat spoilage? - I haven’t been able to tell the difference. Biggest game changer is allowing meat to hang for a week or ten days while I wait for cwd test to come back.

With a bow? I don’t have as much experience mainly because I have enough trouble with deer ducking arrows as is.

Overall - if you’re comfortable making that shot with a gun and don’t want to risk tracking it is devastating with the right setup.

Heart/Lung shot is my standard shot. .25 caliber partition leaves a nice exit hole if you need a blood trail. Usually you don't.

I have found two things that make this shot more successful. First, I don't shoot unless the deer is anything but calm, relaxed & unaware of danger. The second is something my Dad taught me. Wait till the deer exhales. A cool morning helps you see this. Paying attention to the rib cage, you can see it relax as the deer exhales. It took some time to figure this out, but it has worked well once I did.

My dead right there shot is a neck shot. Took one this year right at dusk. Before the muzzle flash was gone the deer was on the ground.

Any well placed shot in one of the vital area's will do the job, including the shoulder. I will shoot there if I have no other option. Usually if I am patient, I can turn the heart into red cottage cheese.

In my limited hunting, a Berger blowing up in two lungs means an animal goes no where, exit or not.

I'll use a shoulder shot, especially in one scenario. I elk hunt in a very crowded WA State eastern GMU.
Took many bulls the last 52 years. But if other hunters near, I'll shoot, break the shoulder every time. A shoulder shot brings them down on the spot. Sometimes need finishing shot to the neck. NO lost elk to another hunter's tag that way.
In my unit, your shot bull goes 50 yards, high % chance that the bull will be shot and/or tagged by another rifle hunter....no kidding!!
Several of my bulls have gone 50-100 yards with perfect heart-lung shot, using my fave 300WinMag. Now those bulls were running from being spooked by hunting pressure. 90% of my non-spooked elk will drop immediately or go very short distance after a heart-lung shot from my 300wm.

in 1978, I shot a 6x6 bull, right behind shoulder crease in the heart-lung pocket, would have been perfect archery placement. Used a 30-06 w/180gr Nosler Partition back then, took bulls before & after with this rifle. Bull went thru timber, heard it crash down, went 80 yards with heavy blood on the snow the entire way. I made my way down there thru steep terrain in 10 minutes.
Only to discover that 2 local hispanics from Yakima had their tag on MY bull!
Took it away from me and they hadn't fired a shot.
Never forget the M1 Garand they had (only had 1 rifle between them)....and how they pointed it at me!!
My dad was pissed, drove down from camp to report to Kittitas Sheriff. They couldn't do a thing. neither could the WA State game warden.
K

I shoulder shoot every deer I kill, given the option to do so. I aim about center of the shoulder, above the leg. Very high percentage of them do not take another step. In fact, I can't remember the last time I had to trail a deer I'd shot in the shoulder. Having said that, most of the deer I shoot are well within 100 yards, as I usually hunt in timber. I use a 280 with Federal Premium Nosler Partitions.

Yes there will be meat damage on the shoulders but that's a non-issue for me.
Last edited: Feb 28, 2021
T

+1 for the shoulder shot on whitetails. I've done it with 30-06 using 150 grain "Deer Thugs" (which I believe now are Fusion, or close enough). Two years ago I dropped one doe where she stood. Her doe friend left, then came back to check out the scene two minutes later. I double-up and both dropped where they stood, and even though I shot both broadside, each had damage to the front of the chest too. I was pretty happy to not not have to track either of them.
A

Agreed. I like the shoulder shot especially if you’re hunting in the evening. Tracking in the dark is no fun.

I want to hit them 1/3 of the way down in the center of the scapula..

I'm shooting 225 eldms or 230 bergers, it's always DRT, that bullet absolutely shreds the lungs when done right and gets into the spine..

I wouldn't take that shot with a mono though, not enough damage imho..

Sorry I'm referring to elk, I shoot deer in the same spot with a 6.5 prc..

TimeOnTarget said:
What you're referring to is shooting for the brachial plexus. It is a bundle of nerves in the high shoulder. Not actually the spine. It works well and I've used it if hunting close to a property line or the like.
Click to expand...

I have unintentionally hit two in the last two years in this manner. One bow, one rifle.

The bow shot deer punched both scapulae high and busted / cracked the far side. It took three limping hopping steps and tipped over. She was dead by the time I walked up to her. Got the tops of both lungs. Lots of blood in the shoulder meat.


The rifle shot was a 6.5 creed 120 all copper. Quartering away. Hit a rib on the near side, lungs and out the far side scapula. One run a +2” 100 yard zero and it was a 60 yard shot so probably 3-4” over point of aim. Deer hopped a half step and dropped. She was dead by the time I walked up to her. The bullet fragmented a bit and there was lots of meat loss and damage on the far shoulder. Probably cut away the top 1/4 or 1/3 of the shoulder meat when I processed it.

I guess I can see the utility of an anchoring shot. Short recovery for sure but more meat loss than just punching the lungs. I wouldn’t want to make one with a lead bullet though.
C

I've killed enough WT's to forget how many and there's no time I'm intentionally aiming for the shoulder. If your hitting them in the vitals and having a hard time finding them you need to rethink your setup IMO. This is the reason I quit shooting all copper bullets.

Just to much meat loss with a shoulder hit.

I stillhunt thick woods in the NE. I'll take whatever shot presents itself. That could be a shoulder, neck or vitals shot. I often don't have the time or luxury to pick and choose. The neck and shoulder shots do seem to dump them right where they stand and I like that.

I am more likely to shoot on in the shoulders late in the evening if hunting in the woods. At my age I am not a fan of stumbing around in the dark looking for my deer.
If I cant find it and have to leave it overnight I aways figured the coyotes would eat more than then two shoulders I ruined. During the morning or if I am hunting a clear cut or a large open area I will take the heart and lung shot. Even then the deer may be quartering and a shot to the vitals ends up in at least one shoulder. For some reason I dont ever get them completely broadside shots.

WRO said:
I want to hit them 1/3 of the way down in the center of the scapula..

I'm shooting 225 eldms or 230 bergers, it's always DRT, that bullet absolutely shreds the lungs when done right and gets into the spine..

I wouldn't take that shot with a mono though, not enough damage imho..

Sorry I'm referring to elk, I shoot deer in the same spot with a 6.5 prc..

Sent from my SM-G960U using Tapatalk
Click to expand...

I would disagree about the mono. While it does a lot less damage to the meat you get the same DRT result with monos. Breaking a shoulder and blowing out the lungs, usually a petal or two come off due to the hard bone and shrapnel off.
C

I tried it this year on my buck. He was DRT. I usually haven't shot for the shoulder but after this year I may start looking at it more. It is nice not to have to go tracking
D

I've used the high shoulder shot in the past when hunting near property lines, but have moved away from it now. Since the end of 2019, I've hit five whitetails right behind the shoulder with 150 grain Federal Fusions though an '06. Not one has made it more than 40 yards, and that doe ran in a circle and dropped almost where she was when I shot her. This past season, a shot through the lungs dropped about a 200 pound live weight buck like he had been spine shot (he wasn't). At least for whitetails, a well placed bullet in the boiler room kills them dead without much fuss.

I hit my second muley doe this year quartering away a little far forward, but the 156gr 6.5 berger EOL hit a shoulder blade and absolutely grenaded. Took out both lungs, front should was gone and left a 6" hole in the front of her chest.

She still ran 100yds and died under a tree. No idea how, but both does I shot last fall ran and the other was a heart/lungs shot. 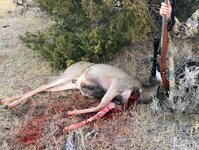 What was your impact velocity with the 156?

I'm not sure off the top of my head, but they were leaving the muzzle at 2810 and it was around a 90yd shot.
You must log in or register to reply here.

What did I do right/wrong