Running low on arrows and going to order some more from black ovis in a few days.

I put a broadhead on last night to see what that looked like lengthwise and am thinking I may want to add 1/2" to 1" to my new arrows? From the pic below do you guys agree that I probably want a bit more length on my next set of arrows? I've got a scale ordered to verify draw weight and decide if I want to go slightly stiffer but figure I need to determine a length first...

Also, when determining spine are you taking into account the insert length or just the nock valley to end of carbon length? 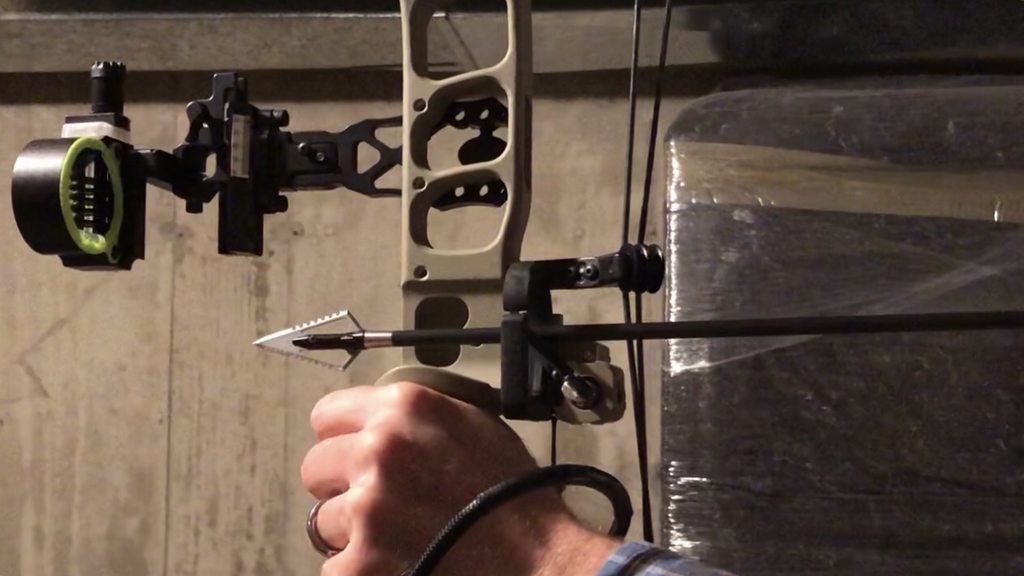 You could add a quarter inch or so, those broad heads look to be sharpened on backend. Stinger buzzcutts?

I always shoot with my BH's over the shelf just in front of the rest. But I also shoot with a 32" to 32 1/2" draw. I'd shoot with whatever length you're comfortable with.

I shoot the same set-up with Rampages and my Centergy Hybrid.

I'd go a little longer if your set on fixed BH.

I shoot the wasp Jak-Knife 2 blade expandable with a 2'' cutting area and great pass throughs.

I really don't like hunting with all those sharp broadheads around me and I don't care for the way fixed broadheads fly. But thats me
OP
T

I am torn on mechanicals (this year) as I'm not hunting anything big this year (just antelope and ibex). I would prefer to not need new arrows next year if I'm hunting elk though and would definitely prefer to shoot a fixed blade for that. Adding 1/4" to 1/2" would probably make me a little more comfortable clearance wise.

I'm new to figuring most of this out myself as I had an awesome shop near me when I was in NM. I don't like the new local shop too much so determined to figure this out as much as possible myself.

Whats the total weight of your arrows now?

What weight BH are you shooting?

250's will make the arrow heavier & slower but quieter and you'll need to reset your sight pins.

My arrows are about 485 grains which seem to be hard hitting and not drop to much at farther distances.
OP
T

Total arrow weight is about 445gr with 100gr heads (Magnus Stinger Buzzcuts). Standard nocks and vanes. I'm going to mess around with some 4 fletch configurations and maybe a lighted nock once I figure out what Vanes I like. The extra vane and a wrap will add a few grains to the back but I don't know that it'd be enough to make it act that much stiffer, especially if I add 1/2" of length?

I don't like a fixed blade head anywhere near my fingers. It's mostly just a mental thing, but I don't want thoughts of slicing my finger off going through my head when I drawing back on an animal. That's just one more distraction that I don't need in that moment. I like my arrows cut 1/2" to 1" longer than my draw length so that the blades will sit farther out than my knuckles.
G

Remember when many of us were using overdraws? I always was taught to keep my hand below the shelf.

I'd say do whatever it takes to make you comfortable, but I don't see anything wrong with where it's at. If it's gonna mess with you mentally, or if you have a tendency to raise your fingers when shooting then maybe a little longer. My fingers never even come close to coming above the shelf, so I have never even worried about it. As long as its clearing the shelf then its good to go for me.

I had the same question about arrow length and all the pros recommend carbon is cut 1” in front of where arrow sits on rest....but why? Yes everyone will tell you safety but the real reason is node tuning.

The node of the arrow is where it flex’s the least as the arrow is released which equals a more accurate and forgiving setup especially for broadheads. This is where the insert ends inside the shaft and the hollow carbon arrow begins, for most about 1” inside, hence the recommendation.

I had to confirm myself. With different arrow tip weights and arrow lengths, each spined accordingly, I tested it out. The longer my arrow got and farther my bh and node got out from my rest, my paper tears and long distance shots got worse. Yes I could get them to hit where I wanted with absolute perfect form and release but not half as consistently, that’s a huge difference! I even powder tested it, with the longer arrows I could see more contact on the sides of my rest. Then the opposite, tried to see if shortening the arrow even to the point of letting the outsert sit on the rest would make a difference, not so much actually.

If you want the most accurate arrow flight with bh, your node(where insert ends in arrow) needs to sit right on, slightly in front of(not more 1/8”) or behind your arrow rest. To accommodate your safety requirement you could move your rest forward...deal is most bows aren’t as forgiving with a rest that far forward.

If I were you I’d keep my rest where it is and try to find a spine of arrow and tip weight to match the carbon being cut 1” in front of rest. If your worried about bh cutting finger, position them horizontally so they won’t and/or slightly lower your grip. Looks like you have a full containment rest so you’ll be fine. Shoot your bh’s a lot so your comfortable with them. Ive never even heard of someone I know or a friend of a friend slicing their finger. Probably have just as much of a chance with a carbon arrow blowing up during a shot