Just got done with a pretty cool deer hunt in NM. Luckily this year I drew a tag in a unit that a friend of mine lives in, so no roughing it like all of last season. We put on a ton of miles covering country in the truck and hiking to glassing points to find deer.

Day 1: Dec 31st. The weather was around 50 degrees when I arrived in town and it was raining. We drove out to a spot with a good vantage point and sat in the rain for hours overlooking more country than two people can legitimately glass. We turned up 17 does and a small 3pt. Thoroughly soaked we came back to town and regrouped for the night.

Day 2: opening day. A big front was supposed to blow in so we really only had the morning to glass. With the wind blowing 40 we figured the deer would only be on their feet early, if at all. So sunrise found us at a high point overlooking some lower country and big washes. This morning we found group after group of does being nosed around by young bucks. By the time everything had bedded down it was 10:15 and we were fighting to keep our spotters from blowing over. We had seen 52 does at our last count and 4 small 4pts and one decent 3pt. The afternoon of day 1 was spent driving and glassing looking for deer on their feet, but none showed themselves in the terrible wind. Right before dark a big Blue Norther hit with an incredible temperature swing and some amazing clouds low to the ground. The temp dropped from 55 to about 20 in a matter of minutes.

Day 3: Temps when we woke up we’re hovering in the single digits, around 6*. The wind was completely gone and the sun was supposed to be shining. We encountered ice and snow as we headed out to a glassing point we had seen some deer from the morning before. We mainly wanted to give it a chance to show us if we missed anything due to the wind. We glassed for 3 hours seeing many of the same groups of does in the same spots, 6 coyotes, and all but the 3pt from the morning before. No new bucks, no sign of a mature buck anywhere. We were bound and determined to give it a good look so we stuck it out. While we were glassing the local Game Warden pulled up and checked my license. It must be a sign of getting older that I wasn’t even in the least bit nervous to see him driving our way. He ended up being a nice fella and told us where he had had some success during muzzle loader season. We chatted for about 35 minutes and went our separate ways. The evening of day 2 had us in some different country on top of some hills glassing a couple of flats. We ended up finding some does with a young 3pt and a small forky with them. Still no mature bucks to be seen. We made it back to the house after dark and had to do some thinking drinking about our game plan. There didn’t seem to be any mature bucks roaming around where we were looking. The game warden told us it was a tough year so far for deer and that not many people were having luck. We decided to punt on the usual areas and try something new.

Day 4: Up at 5am and on the road by 5:20. We were going to hunt a place that a buddy of my friends had told us about. I had zero faith in this spot as soon as I laid eyes on it. It looked like a sea of flat waist high grass with small hills marking the landscape. I didn’t think for a second that we would be able to glass anything up in the high grass. But the further we went the shorter the grass got and the better the country looked.

About 7:50 we finally found some deer right off the two track. They stood up from their beds and just appeared, it blew my mind how they just disappeared once they bedded back down. So on top of the truck we went to glass from a better angle. We counted 17 does and a fine looking older 4pt he was about 20” wide and tall. His forks were kind of weak but he had good fronts. They finally got tired of us looking at them and moved off to re bed about 900 yards away.

We both knew how tough it would be to get within bow range of 18 deer on alert. My buddy joked after a bit “no worries, his crippled up ol granddaddy will be laying right up here in this bowl”. We drove about 300 more yards and up jumped a heck of a good deer. Deep forks, heavy, decently wide!! And most of all he was alone!! Back up on the truck we go to keep eyes on him as he trots away. We watch him for 45 minutes until he re beds. He bedded facing into the wind with a slight depression running about 100 yards behind him. We duck walked down the two track where I left my buddy to watch the stalk.

Here’s the bad part about where I was hunting…… sticker burrs. And I don’t mean a few. Every blade of yellow grass had 20 it seemed like. I made it about 20 yards before I realized that something had to change. Back to the truck I went to get my work gloves and my heavy cotton gloves to help protect my hands. I was about 400 yards from the deer and about 300 yards from the depression that would conceal me the last hundred yards from where he was bedded. Both knees and at least one hand had sticker burrs in them the entire time. It took me about 3 hours to make it into the depression where I was finally out of sight of the buck. During the stalk I had lost my temper with the heavy cotton gloves and discarded them along the way.

The final 100 yards was fairly easy terrain except the dry grass was pretty loud. I had to wait for a gust of wind to blow before I could gain any ground. Once I was inside 60 yards I knew that any little mistake would blow him out. So I did my level best to step only on sand and to only move when it was gusting. Once I got to 40 and still hadn’t been busted I was feeling pretty good. I nocked an arrow and crawled forward a final couple of yards. There I settled in to wait him out.

45 minutes into waiting I was miserable, my knees hurt, my toes hurt, my leg was cramping from low crawling…. I was not having fun haha. I picked up my range finder to check the range for the 100th time and as I was 35 yards away. As I put my range finder down it swung back and hit my release making a loud click. The buck flinched when he heard it so I got ready to draw my bow. A minute later he erupted from his bed and took two hops. I drew as soon as I saw him start to rise so as soon as he stopped I leveled my bubble, settled my pin, and released a perfect shot. I knew it as soon as I let it go. He made it 55 yards and was down within sight.

My buddy got to watch the entire thing happen and said it was incredible. He made it to me and we both walked up on the buck together. It was a crazy good feeling knowing that it all came together. He was an old warrior. Both ears were split and he had puncture marks and scars all over him.

Here are some pictures. Sorry for the long read. It was a roller coaster of weather and some cool country to hunt in. I’ll be ready with knee pads and some different gloves if I ever draw this tag again.

From where we first jumped him

After we walked up on him 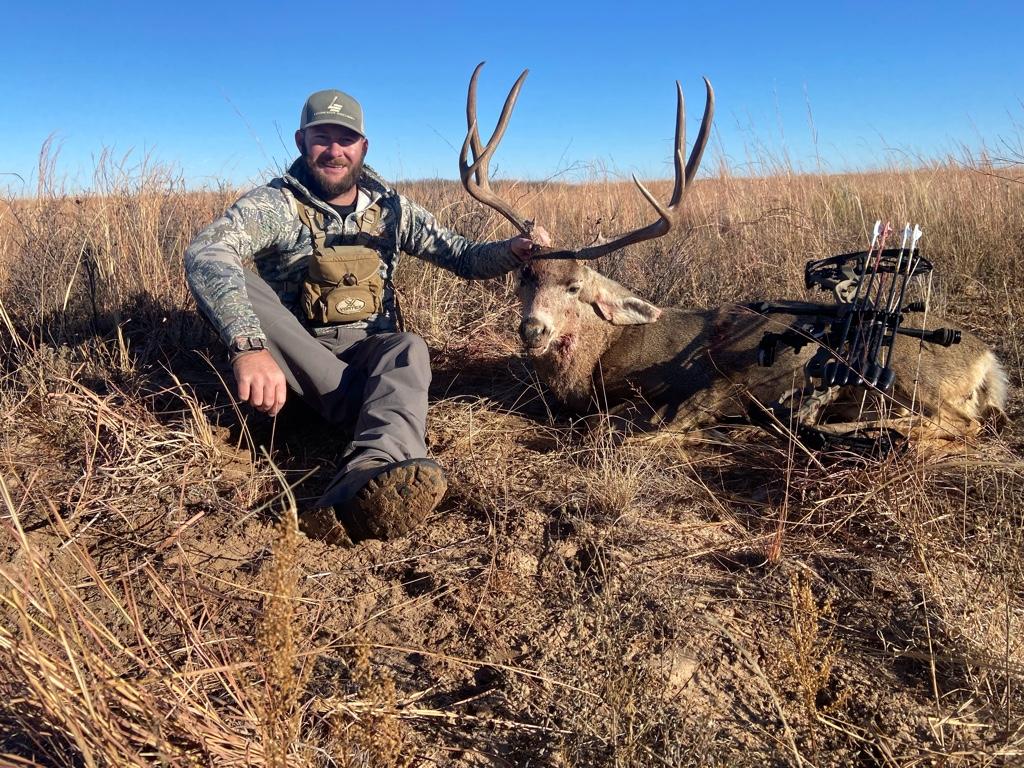 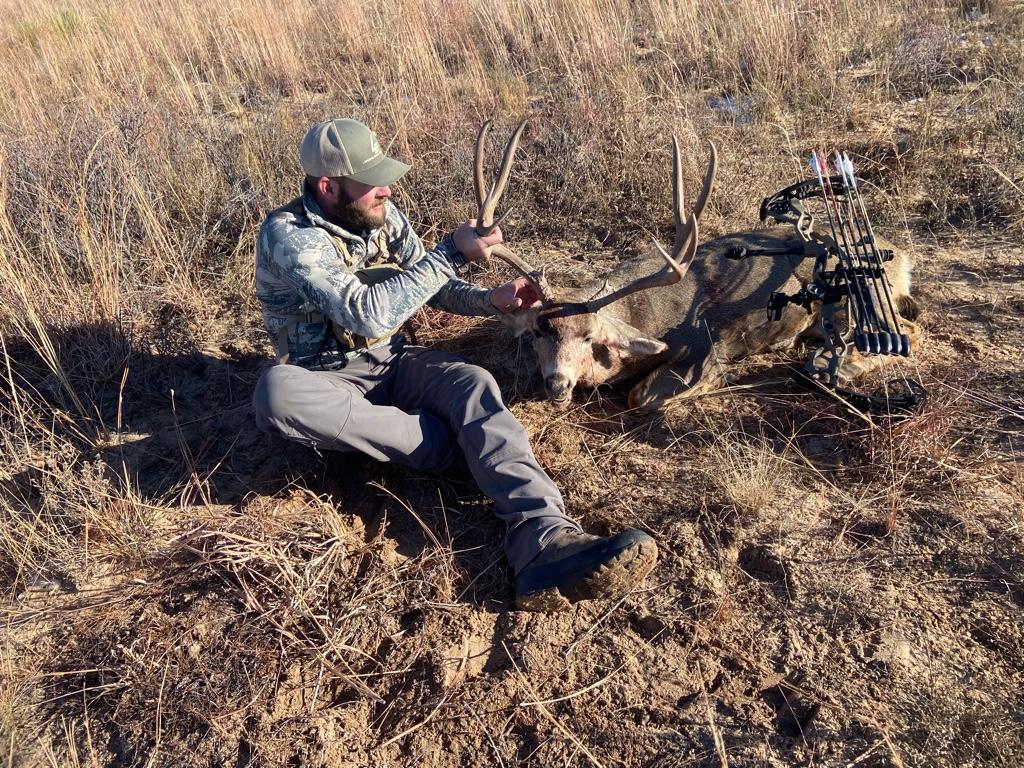 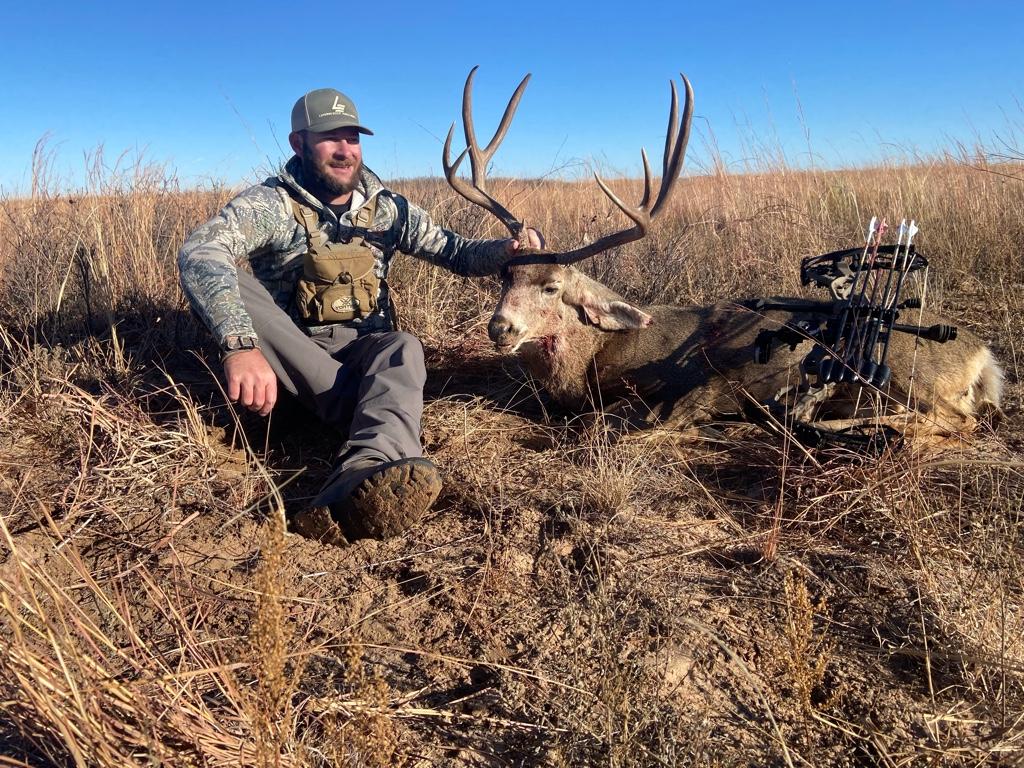 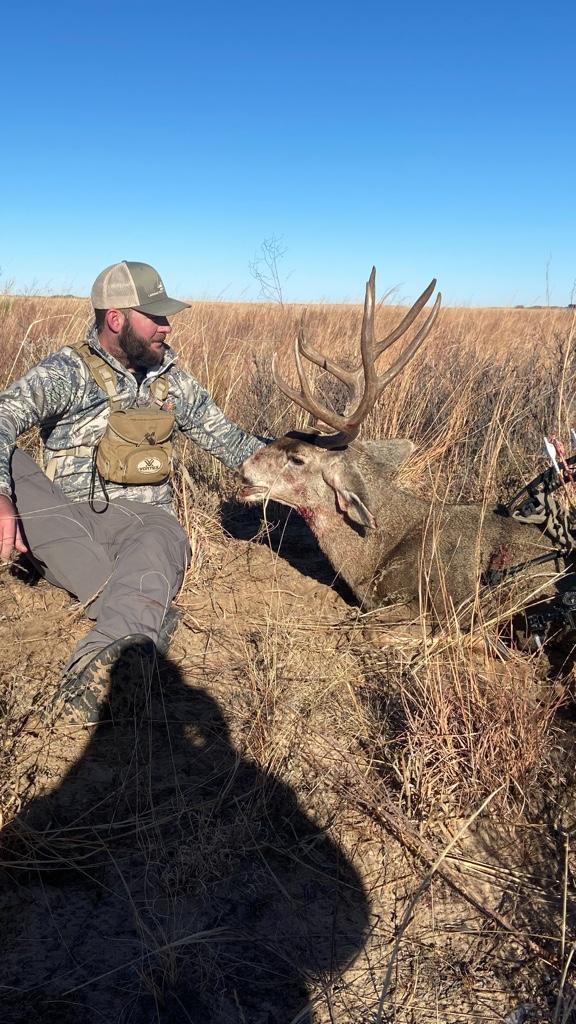 Once back to the house 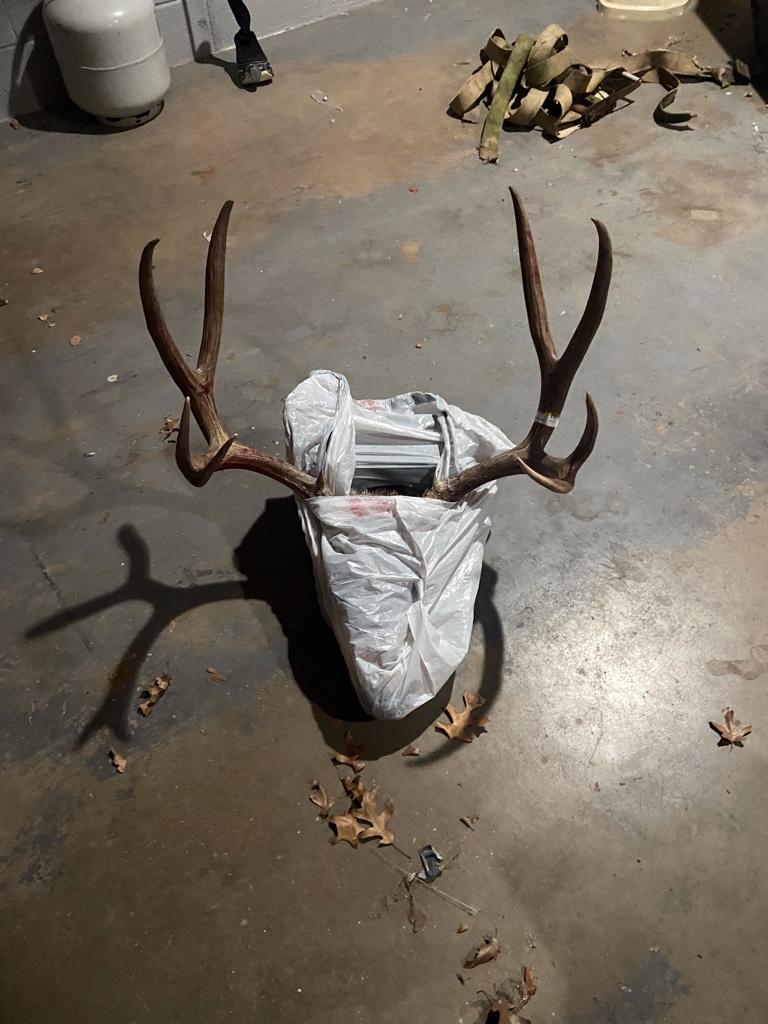 Congrats on a nice buck

Awesome story - good job and congratulations on a nice buck! I'm hoping to go after one with my bow again next year!
L

Great recap and congrats on a very nice buck!

Great deer. Thanks for taking us along.
P

Nice buck!!! Was this in the southeast?

Congrats, a tough stalk too. Beauty of a 4x4 mainframe buck!

Sent from my iPhone using Tapatalk
You must log in or register to reply here.