BLM on two corners with Private on the other two, ok to cross corner?

Ok to cross the corner to the area with black scribbles?

BLM to be BLM yes do all the time here in Arizona called and spoke with Game Warden about this was gave the thumbs up. Also have called the land owners to some said no and most gave permission as long as it was by foot traffic.
not sure what state you’re from, but check with local law and game warden?
B

It depends on the state.

A friend who grew up in WY just told me last week that this movement is not allowed in his home state...
D

Not legal in Colorado. It’s called corner hopping, lots of info on this topic out there.
Last edited: Oct 24, 2021
O

This and the long strips of private land along roads that defend public land piss me off to no end.

my opinion is that for X acres of public land there must be Y access points. I don’t know what the Xs and Ys are yet.
OP
B

Spot is in CO. It's a back up spot, but no other way to get there and has an interesting feature. I'll see if I can get ahold of land owner.

Had a long conversation with CPW about that. He didn’t agree with the law, but said he would cite me if he had to.
OP
B

Didn't think I could literally just google corner hopping, yet there it is. Pretty crappy to not be able to hop a corner public to public,

Nope not in Montana.

Legal as far as i know in Az. It is ridiculous that it is not legal in all states, you literally do not need to step one foot on private. I wonder why they make it illegal in states? They should make the bogus, buying every other parcel, illegal so that this does not happen.
T

Maybe? Finding honest legal decisions on it seems next to impossible
W

People that don't know will tell you it's illegal in Wyoming.
The worst you'll get is a warning from a deputy, they won't, and don't write tickets. And when you read the " my friend got a ticket", it's because they didn't cross at a corner. I know of two tickets; the courts tossed the first and the wardens boss tossed the second. Wyoming wardens can't write a ticket for just crossing at a corner, it needs to be a game violation.
I called the chief game warden in WY and told him where I was going to corner cross. Short answer was , you'll be fine. I showed the local warden on his map draped over the hood of his truck where I was going to corner cross and the reply was "keep a track, stay on public, and if the lo gives you grief record it."


You can't get a ticket at this corner with a deputy standing there watching you, it's been tried. 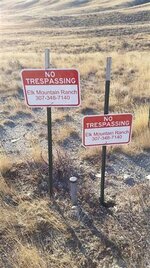 What's the actual Colorado that's cited? It looks like it's touching, so as long as you don't set foot on private it looks ok?
O

sawsington said:
What's the actual Colorado that's cited? It looks like it's touching, so as long as you don't set foot on private it looks ok?
Click to expand...

its the air above the infinitesimal corners that you would violate that is the problem.

Some folks are really spouting off here.

The OP should do their research, but there are states where it isn’t explicitly illegal, which then begs the question, is it legal? No one knows. One warden might ticket you only to have the prosecutor toss it. Other warden might not ticket you but tell you to move it along.

What would the charge be anyway? Criminal trespass? There are some criteria to meet that charge the OP should also research.

I’ve never done it myself, but there are places I’d risk it. Just be discrete, do it at night, and leave no trace. And don’t complain if you get ‘busted’ or hassled, that’s the risk you took.

Going to spout off here… lol

If its a true corner, then all the points touch and you could cross without touching either private side. Or they could argue you touch both private pieces at the same time as touching both public pieces. Its all, or its nothing.

If none of the pieces touch and its an infinite point in the middle, then again, you do not trespass by crossing. Its a no mans land.

Whether or not a kangaroo court and its jesters see it this way is another story. Think of it mathematically though, and from that standpoint it makes sense to be able to cross. It would be really nice if the landowners just left a little gap or just didnt care. Their biggest issue is probably people just breaking their fence or wrecking the land with trash. Just be prepared to deal with the consequences, but personally I would do it regardless.

Seems like this would be a great thing to bring to a public vote. If the wolf lovers can convince the general public we need wolves in Colorado, why can’t we convince them that they should be allowed to access public property that land owners use as their own, free land.
You must log in or register to reply here.