Big Agnes > Marmot > Alps. Most expensive to least. Any of them will work and I’ve used each of them. Double doors is key for a 2 man so you’re not stepping over each other in and out. UL tents are lighter, but also more delicate. Buy what you can afford and start there.

Just my 2 cents. Check steepandcheap, Craigslist, campsaver, this forum. There are deals to be found.
Z

I am looking go get into backpack camping and hunting. Over the last couple years I have pieced together all of the gear except for a tent. Ive decided to start with a fully enclosed 2 person tent as it will be mostly solo trips and occasionally my girlfriend joining.

Since I have never done this before im not looking for a cross between light weight, reliable, and affordable. Thinking under $250 new or used.

I have been eyeing the kelty late start 2 as it seems to be one of the lighter options in the price range and has great reviews. Are there any others out there I should be considering or higher end ones that I could get used in this price? I've been watching the classifieds but it seems the top of the line stuff is more common there.
Click to expand...

If you do Facebook you should join backpacking gear flea market. There’s always tents on there at good prices.
M

I used a $29.99 3 man tent from big 5 for 15 years. My only complaint was it was heavy. It weathered snow, rain, wind and traveling from California to CO atleast a dozen times.

I still have it. But since I can afford it I now have a high end tent that weighs 2 pounds and change.

I prefer a larger tent especially if I expect weather. Gives me plenty of room for my pack, bow, cooking and sometimes my saddle gear.

Finding and trying a few different sizes will give you a really good idea of how big of a tent you want.

Sent from my SM-G986U using Tapatalk
B

Check out Outdoor Vitals. They have some nice stuff. No experience with their tents, but their sleeping bags are nice

Dan Durston 2P is now available on Amazon. Incredible tent. Polyester, so doesn't hold water or sag when wet. Put in four stakes and she's up. Add a couple more stakes in heavy weather. Dual vestibule. Huge for a 2 man, and about 3 pounds.

Tested mine in the backyard for a full week in heavy rain. Dry as a bone and nice and tight. 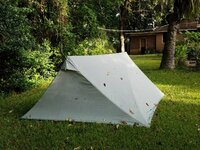 Mike Islander said:
Dan Durston 2P is now available on Amazon. Incredible tent. Polyester, so doesn't hold water or sag when wet. Put in four stakes and she's up. Add a couple more stakes in heavy weather. Dual vestibule. Huge for a 2 man, and about 3 pounds.

Tested mine in the backyard for a full week in heavy rain. Dry as a bone and nice and tight.
View attachment 282777
Click to expand...

What do you have holding it up? Treking poles?

Lexus423 said:
What do you have holding it up? Treking poles?
Click to expand...

I’d check out the 3ful gear Lanshan 2, it’s on Alixpress (maybe amazon in the states has is? I’m in Canada...) and it’s great. It should be around $100-150usd and although it’s a knockoff it’s very high quality in my opinion. Used it for ~30 days last season with absolutely no issues. It is a trekking pole tent, but you can buy separate carbon fiber poles if you prefer. They make a single walled (called the ‘Pro’) and double walled version. I have the double walled because I didn’t want to deal with condensation issues. They also have 3 and 4 season inners for the double walled version, I got the 4 season, only difference is less mesh versus the 3 season).
Stood up to a hell of lightning/wind storm one night last summer on a scouting trip, probably close to 50mph winds on top of a hill. I just made sure the angle the sloped edge into the wind.

I know your not a fan of using a trekking pole tent but if you decide that’s is an option take a look at the mountain smith mountain shelter LT. I’ve been using mine for several years and I like it a lot.
J

I’ve used a kelty “2 person” for the last 10-12 years and it’s been great. Think it was under $150 new.
I used to pack it in its bag until I realized i could stuff the tent and fly anywhere in my pack and just carry the poles separate against my back, inside the pack as well.

for a budget option it’s been great.
I havent found a reason to upgrade since I bought it. No holes, nothing broken. Been up to 12,000’ with it.
good stuff
T

I will second the Kelty recommendation. I just picked up a Kelty Late Start and its a solid tent that is still fairly light. I considered a higher end ultra lightweight tent but couldn’t justify the price tag. I got my Kelty for $160 and I think it will fit my needs perfectly.

C
Any Reviews of the Tarptent Motrail?