Charged by a black bear sow - did I make her charge?

My brother and I were elk hunting in Idaho, and my brother also had a bear tag.

We'd seen some elk on an open hillside above us, had setup and called with no response and then stalked around the hill and were above where we had seen the elk, now in heavier timber. We figured we'd either bumped the elk or they had fed off up higher. We came to some freshly used elk beds, and heard some noises above us. Visibility was around 30-40 yards. My brother starts to stalk slowly up and I stay put, looking and listening.

A blond bear appears 30 yards above us. I whisper and point him out to my brother. The bear is small, and is feeding across above us and has no idea we are there. My brother moves to potentially get a shot. We whisper to each other that he's very small and probably shouldn't take him despite beautiful color. My brother continues to move along under the bear who is feeding around the hill and towards us, now only about 15 yards away.

I hear movement in the other direction. Another bear appears, this one perhaps 20 yards away. I can only see the head. It's the same color. Brother or mother, I'm not sure, but I immediately realize this is no longer a hunting situation, but something we need to get away from. I whisper back to my brother so he realizes what's happening to make sure he won't shoot. The second bear is looking at me, but we are down-wind, and seems it doesn't know what we are. I start waving my arms and yelling "Hey bear, get out of here bear". Second bear pauses for a second and then charges straight at me, growling quietly. As she moves, I can see from the size this one must be the mother. Not huge, but not small either. Nothing to do but keep waving and yelling, which I do. She comes in to about five yards, then swerves up the hill towards her cub, and they both disappear.

Got my adrenaline flowing Never felt super threatened. It wasn't a huge sow, but I'm sure she could have torn me up if she wanted. The only weapon we had between us was my brother's bow. I only carry bear spray in grizzly country, which we were not in. Wind was solidly in my face, so bear spray probably would have been a disaster anyway.

What should I have done differently? Clearly I should have realized this could have been a cub with a mother nearby, but in spring bear season we saw so many small bears, honestly this thought did not cross my mind! I think once we were in this situation, a better response might have been take a slow step sideways away from the bear and start talking in a normal voice rather than immediately go to intimidation mode? Any advice from those more experienced would be appreciated.
Last edited: Sep 23, 2021

What you did was absolutely perfect! Nobody, and no bear got hurt, right?
Perfect.

I don't claim to be any sort of expert but sounds like you did everything appropriately and nobody got hurt. I'm sure it's an encounter you will pass down to your family, and a neat experience. Hope you had a good elk hunt.
B

Just got too close without them knowing.....surprised her. Has happened to me with cow elk and calves, they dont act very friendly either.

My response would be similar, with a small/young sow, if she was charging I would probably make lots of noise and look big.

Thanks for the feedback.

Yup no human or bear was hurt, so actions were at least acceptable.

Elk hunt was fun... archery is always challenging, but we eventually got a calf

Agree on the "too close without them knowing"! I've bumped bears (mostly when hunting them) at up to ~200 yards and they have always high-tailed it. Seems their instincts are at least a little different when so close, especially a sow with a cub when we were so close to her cub.
L

i walked up on a bear this summer. once it realized what i was it took off but we had about a 30 second stare down. i knew there was a sow with cubs in the area, and instantly was trying to make sure i hadn't gotten between it and some cubs.

Sounds like all worked out fine but i would have been shaking after all that.
W

If legal, I would carry a large caliber pistol (10mm, 44 mag, etc). As you so aptly stated, once it is "no longer a hunting situation, but something we need to get away from" I would have the pistol in my hand ready to use. Doesn't take much of a bear to tear you apart if they are so inclined. Glad it all worked out!

And after going down the rabbit hole on some other threads about charging bears, I'll make sure to have my IFAK on me instead of in my vehicle...
OP

GAoutdoor said:
And after going down the rabbit hole on some other threads about charging bears, I'll make sure to have my IFAK on me instead of in my vehicle...
Click to expand...

LOL... I do carry a basic first aid kit, but I don't think anything in it would be much use to treat a bear mauling!

If I'm solo, I do generally carry an emergency response beacon... perhaps worth considering carrying that when I'm with someone else too.

Carry a pistol, .40 or larger for black bear. Otherwise not much else you could do in that situation. Bear are nasty and extremely tough. Even if a lethal shot could be administered by bow, rifle, pistol chances are you’d still get roughed up before that bear died. Too many times I’ve seen bear with a bullet through the lungs or heart run out of sight before dying. Now put those 10-15 seconds of a bear 10 yards from you charging and fighting for its life. Always pack a weapon of some type when bow hunting or hiking in any predator country.

yellowbeard said:
LOL... I do carry a basic first aid kit, but I don't think anything in it would be much use to treat a bear mauling!

If I'm solo, I do generally carry an emergency response beacon... perhaps worth considering carrying that when I'm with someone else too.
Click to expand...

Sounds like you need an upgrade to your first aid kit! I'd recommend a tourniquet (I carry both a CAT and SWAT-T), QuikClot, S-rolled gauze and a pressure dressing. If you're mauled by a bear, these may save you from bleeding out while you wait for response to your PLB. I also throw in a splint when I'm hiking.

I found this article helpful when putting mine together. Some items are rather situational and omitted, but I thought it was a good starting point. 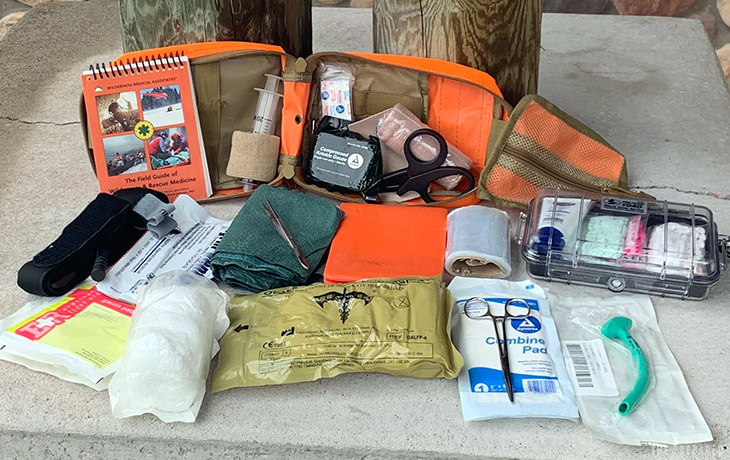 Medical experts with 180 years of field and teaching experience show you what items to buy, in what order, what to skip, and why.

Every adrenaline packed moment I've had involving a bear charge, be it bluff or real, has been from a Sow, with or without cubs. I had one hell of an encounter with a Boar grizzly recently, sleeping on a caribou kill and he did nothing except watch me walk away.
R

Sounds like you did everything right, just got unlucky and ended up between a sow and a cub. Be happy it wasnt a grizz because that probably would have ended differently.
OP

Great advice thank you, looking at some products (and reading how to use them) now.
Last edited: Oct 5, 2021

Did you bring clean underwear?
B

If nobody got hurt, then I'm not sure you could have done anything better!

incidental encounter it appears......
When hunting well with wind, audio and visual all under wraps it's more likely that bumping a predator will occur as well as your prey. Be prepared and understand that. I hunt all the time in Brown Bear country and I do bump bears. You will get closer if hunting well. Thats the risk we take.

“Should I have done anything different?”

Yep, you both should have been at full draw.
You must log in or register to reply here.

H
Being charged by a wounded black bear
2 3