Had the pleasure of scouting my buddies back 60 acres this weekend (post deer season here in NC). I had hunting the front section during the later half of the hunting season, but due to my lack of familiarity with this part I wanted to scout it first - after the season.

Aside from an almost gun fight with MS13 (we believe a neighboring tract is being used as a grow house or cook house) I had a phenomenal scouting trip.

One thing I am left in a slight conundrum about is a rub/scratch. I found what I originally thought was a rub (you could see it 50 yards away its so evident). After getting closer and evaluating it, I am not sure if it is a bear, deer, or cat. I am providing pictures below with some commentary.

Clearly there are some big bucks on this parcel. I found 4+" tracts, I found rubs everywhere, it is also nearly perfect for mature buck bedding (hilltop, ridge, benches, deadfall, water and food nearby). The downside to the buck theory for this rub is that I have never seen a buck rub a hardwood in this area. And every other rub I found was on a cedar or like. This tree is a birch or beech tree.

The bear theory is slightly supported by the fact there is a big rock pile not far away that clearly something had flipped the rocks over and dug into the ground looking for??. We also found some cedars that looked like something had "scratched its back" about 4-6' up it. Fresh strips of bark peeled slightly and overall more rubbing on certain sides than others. More so, the marks on the tree clearly indicate some antler tip or claws created them. I am more prone to believe claws because they are too evenly spaced in some areas to include to the side there is clearly a claw that looks like it wrapped around the tree and partially scrapped it. At the base of the tree we moved back leaves and it loose like (very faint at this point) a padded type of foot vs hoof. The downside to the bear theory is that it goes from the ground up to about 2'. Normally bears scratch up higher.

The cat theory is a little more specious. I do believe one evening on the front parcels I hunted I saw a large cat like animal dash across the edge of the woodline and jump into a tree right at last light. Aside from clearly just scratches (like a cat scratching post) on some other trees (but nowhere to this extent). I have no other evidence. So here are the pics... 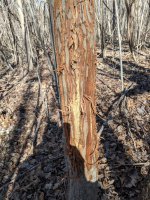 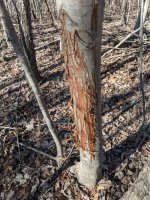 Other scratches on Trees: Here is one of the cedars rubbed high: 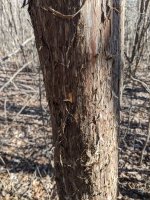 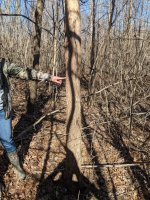 Hard to see but here is the rock pile. There is a small depression. Those rocks around it would have neatly fit perfect in it. 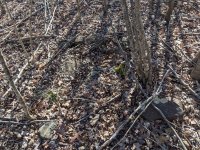 First one is bear, the rest of them are probably bear as well.

Looks like the bark is pealed both up and down, I'm not in bear country so......I think its deer using his guard points..

three5x5s said:
Looks like the bark is pealed both up and down, I'm not in bear country so......I think its deer using his guard points..
Click to expand...

and the one example is low on the tree....bears dont scratch that low....and porkys peal the whole section.

Deer on the first tree. The others dont look like anything, esp. the cedar.
K

Just hope they are not MS13 markings
C

Look like deer to me. Bear around here usually mark higher, seeing how low those go make me think deer. We see some pretty big trees rubbed up here. Congrats if you have permission to hunt that land
M

Bark is torn going up, can't be a bear unless it's hanging upside-down from the tree. I'd love to see a video of that though.
Deer for sure.

Can we go back to that part about a gunfight with MS13???
OP

and the one example is low on the tree....bears dont scratch that low....and porkys peal the whole section.

Agreed on the low... Also its rare given the number of evergreens I see anything but evergreens rubbed. In fact this is a first time. That said, the marks on the other trees really look like claws.
OP

full choke said:
Can we go back to that part about a gunfight with MS13???
Click to expand...

This was my buddy Mike's farm. He is European, is very "earthy" (organic, life is sacred, and regenerative - nothing negative in that as I am becoming more like him daily but wanted to give the perspective as it plays a little into the story).

Because his farm (and most of the surrounding farms have not been hunting much (or we thought), it has gotten overrun with deer and particularly does. He called me mid season to come whack a few does to thin the herd - which was interesting given it had taken me 4 years to get him on board with hunting. He is now realizing after some coaching this season we need to manage his farm for game, and may even take up hunting himself.

Soooooo... fast forward. He has a back section that goes up a "mountain" (an NC mountain not in the mountains) that is all wooded and I did not hunt during the season because: a) it is very overgrown b) I hadn't ever been in it before. Post season I decided to go scout it.

My fiance and I went in last weekend to do some scouting. She loves scouting with me - and I have to give her kudos she is a great helper. She often sees things I don't. Had it not been for her the MS 13 thing would have probably ended in a dead body shootout.

We went straight into the woods and kind of worked our way to the back side then followed the property line around and back out. On the way back out there is an adjoining property that kind of cuts in a bit. When we got to that part of the property line my Garmin GPS and my OnX both started showing a fence that was at spots up to 100 yards into Mike's property.

We kind of stayed off it a bit but was following it around. A house and a huge (maybe 80x40) workshop looked like it should sit almost on the property line, but like I said a fence had buffered it off about 50-100 yards. The whole "compound" (house and workshop) seemed odd. It didn't make sense nor did the activity around it jive either.

As an aside... from the time we entered Mike's property both of us kept smelling an alternating dead animal smell and some chemical smell. The dead animal smell was often so strong we both expected to run across some carcass.

We worked out way back toward the road and my truck. As we did, we found places that someone had cut a couple of hundred yards into Mike's woods, as well as animal holding sized ropes hanging off trees like something had been tied out. We also kept hearing only 1 sheep or goat - NO ONE KEEPS 1 of either (I know I have goats).

As we got near the truck I could hear a truck driving back and forth up near my car and told Mary I think someone is screwing with my truck... So we hustled out, As we got to the road a hispanic individual was standing at the road. His hands were in his pockets, he was in a way overdone truck, and he started asking me "what are you doing in there".

I explained it was Mike's property and I had permission. He kept asking what am I doing. I restated. He finally made an implied threat of "well you better be careful in there we shoot sometimes". To figure this guy out, I offered to stop by and inform him when I was going to be up in there. He got mad and had a panicked look on his face as he said "no no the gate is always closed and locked"....

Mary had walked toward the truck as I had told her. He was beginning with each interaction to take a more sideways shooting stance with me. He returned to the repetitive "what were you doing in there".... and I could see things were about to go sideways...Which isn't my first sideways rodeo. Mary decided to walk back over, which caused him to just stop and go back to his truck and get in and drive off. I guess he figured his chance with two people were low. I noted he had a knife as he turned and his hands were still in his oversized jacket pocket.

I drove to Mike's house and informed him of the trespass and fence issues. I also told him about the whole incident. Which he then proceeds to tell me that just last year they had raided the place and it was a bit MS 13 grow/cook house. He said he thought they had cleaned it all up, but he had noticed that it had sold to someone out of the area and we both surmised it had just changed hands to be reused by them. Clearly something shady was amiss.
G

That's a buck using his browtines.

Sent from my Pixel 3 using Tapatalk
You must log in or register to reply here.

Which knot to use?