So to preface this, I have a history of making short stories long! I also want to say my hunting partner and I have been hunting together since 2009 and it has been a wild ride. We've killed deer, bear, elk, turkeys, wolf, and a few coyotes together and do a lot of shooting together. Crazy things always seem to happen to us and we've dubbed our hunting escapades "Epic Adventures". Kind of corny but hey its good times! He was on a Colorado elk hunt the week prior so this last week I was flying solo to get it done the last 4 days of Archery elk season here in Idaho. This was my first real extended trip solo and I pushed it hard every day. This is the 3rd year I've hunted archery elk in Idaho and haven't harvested an elk with my bow to date.

A particular Rokslider was supposed to join me thursday morning, but he decided to blow his truck up on the drive over and left me all by my lonesome for the hunt! lol I'm sure he'll chime in shortly...

I rolled into camp Wednesday just at dark and quickly setup camp and hopped on the dirtbike (if you can call a 125cc pitbike a dirt bike! not mine...) to do some bugling after dark to see where I should be come first light. Plans were to hunt through sunday morning the last day.

Thursday morning I was into 2 bulls right off and had a 5x5 come into me as I was circling to stalk into him! He caught my movement behind some brush just as I saw him and we had a quiet stare down for a few minutes at 67 yards before he turned and headed off. Bulls were quiet from that morning at 8:30 till friday afternoon about 6 PM! Tough hunting for 36 hours and tough to stay motivated. That night at camp I'd heard a bull bugle twice about 1 mile away in a drainage near camp. I wanted to keep that bull in mind as he would be easy to get to, but I wanted to hit up a different spot the next morning to see what it held.

Saturday morning I was at it again and immediately was into 3 bulls dropping into a drainage. One was a for sure herd bull as he was clearly telling me to stay away! The other two never got too pissed off... They'd feed up during the night and then as soon as it would get light enough to see, they'd head for the deep dark timber 2k' below! I tried to play the "Lets see how far we can run down the mountain" game for awhile before finally stopping for a snack. Had a bull about 700 yds below me still bugling, but I was by myself and it would've been a severe bad idea to shoot one in there solo. He quit bugling by the time I was done with a 10 minute snack at 9 AM anyways so I'm glad I stopped when I did. I took a big loop getting back to the top of the mountain and had covered 5+ miles that morning by 11 AM, bushwacking most of the way.

I headed back to camp and went to a small town a ways away to get some more water and a hot lunch. On the way back to camp I managed to triple up on 3 grouse in the road which had me smiling for sure! 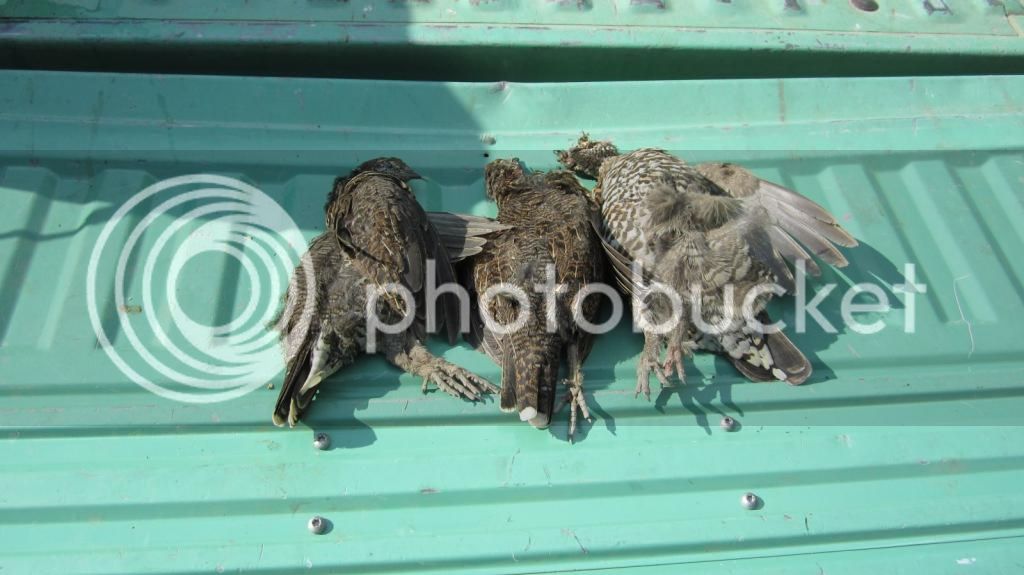 I took a quick nap and did not want to get out of my tent for the evening hunt. I quickly told myself the official Epic Adventures motto of "It only takes a moment" and dragged myself out of there.

I hit up a two track road that was pretty close to camp to work my way back into that drainage where I'd heard that bull bugle the night before. 3/4 mile away I stopped and bugled and he answered! Sounded like he was in an overgrown clearcut just above the road and the thermals were good. I was thinking to myself "this is a perfect setup! Hopefully that wind stays good." I quit calling at this point and stalked within 100 yards of where I thought he was and heard him raking... I was on the beginning of a left hand curve in the road, wind still downhill, and super thick n steep brush below the road. Talk about a perfect setup!

I had my facemask on and cow called twice to him, BAM he hit me right back with a scream and chuckles and it felt like he was in my face! He sounded like a mature bull so I ended up chuckling behind me away from us, then cow called to him, then ran up another 20 yards and cow called to him again.... NOTHING! I slowly took a few steps forward and CRAP! There he is on the road around the corner staring at me! I'm still in the cover of the trees but I know he saw movement. HEART IS POUNDING!

I take 1/2 step backwards and cow call softly 2-3 times. He takes a step to me then turns and takes a few steps away from me and behind a bush on the side of the road. I take that time to step into the middle of the road, drop to a knee and really hit him with some estrus whines and pleading cow calls. He immediately turns around and is trying to peer over the bush but can't see me as I'm down on a knee. I quickly range the bush at 59 yards and clip on my release. He starts to the left to clear the bush as I stand and come to full draw. Guessing him around 65-70 yards I barked at him as he cleared the bush broadside. He stopped and stared as I let 'er fly.... PERFECT arrow flight but I don't see a hit, just heard a THUNK!!!!!!

He takes off like a bullet and I start calling quickly and then everything gets quiet. Of course I start shaking and can only wait a minute after marking where I shot from to go check for blood... NOTHING! No arrow no blood... I start trailing just a few yards to see what I can find and 15 yards away I find blood! Just 2 little drops on a leaf but its good colored! I mark it with toilet paper and head back to the bike to head back to camp to get some other gear and give the bull time to expire...

30 Minutes later I'm back and trying to blood trail the bull. I'm only finding little drops of blood every 15-20 feet and at the beginning it was a few drops every 10 yards! Not a good feeling at all... I then noticed where he started to break off the road and head for the alders on the downhill side. I noticed he'd broke through the alders at one point and had broken a lot of branches. At this point there wasn't even blood on leaves or anything he'd brushed up against! I was starting to feel pretty sick with the lack of blood. I return to the road, mark the spot where he left the road...

I'll let the video tell the rest of the recovery! Sorry about the shaky camera work, I was a bit excited...

And I might as well throw a few pictures on here! 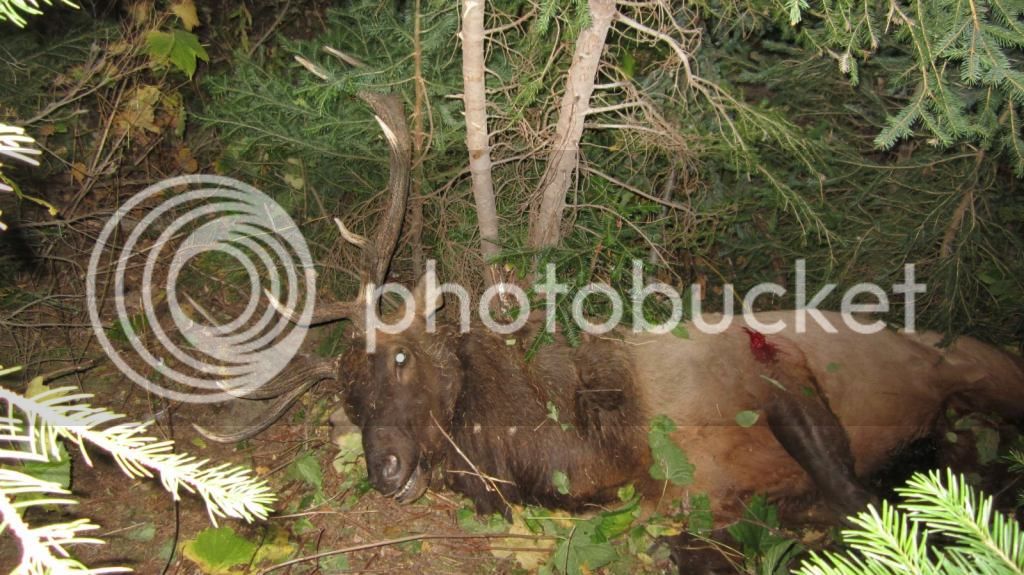 I started processing him about 7:15 and had him quartered and on the road ready to pack out in 4 hours... Had him back to camp and in the truck about 1:45 AM!

Awesome bull Mike. Great job! I bet you are glad you pulled yourself out of that tent!

awesome, no low hanging branches to deal with!?
OP

Thanks everyone!
dreamingbig, I am for SURE glad I dragged myself out of that tent! lol

fillthefreezer, I did have some but I had more of a "low hanging bike" problem to deal with that prompted me to put the horns pointing up! lol

Ryan, yeah well the secret that everyone doesn't know is it was a high fence hunt! Can't you see the chain link behind me?

Alright what does everyone think he scores? I just went out and scored him myself (first attempt at the elk thing)... I was surprised with the score is all I'll say! lol

im not much of a score guy but ill go 320ish

I don't want this to seem like I'm getting hung up on score at all, this is my first attempt at really accurately scoring a bull for myself so I wanted to see what I could come up with! I'm debating on whether I want to Euro him until it's time to send him to my friend who is a taxidermist, or just to skull cap him. Already got him caped out...

296 isn't anything to scoff at, and I think your measurements look pretty accurate.
OP

Thanks Matt! I'm sure happy with him... I was going into this hunt with anything legal is getting an arrow flung at it so I came away pretty lucky!

Another thing to mention, is while I was on elk every day, this is only the second one I actually saw with my eyes. I heard 12-15 different bulls over the 3 days I hunted but only ever saw two! Thick country....

Congratulations on a fine looking bull.

Thank you Ross! That was sure a monster 5x5 you took! What zone were you in?

Bulls were tough calling... could always get them to answer my locating bugles, and even though I've had elknut's playbook and his first DVD, still figuring out the right calls to use when is still a learning process! Right away when this bull hit me up I knew he was calling me TO him and to him I went. In hind site I would've been better off to leave the chuckles out of it as its getting close to the end of the rut and I think even though he was a big mature bull, he was prob too tired to come fight for a single cow... I believe had I left the chuckles out he would've walked right up to me much closer...
I was able to bugle in a 5x5 thursday morning who came in silent, yet other times bulls wouldn't want to come check me out whether I was a hot cow or another bull locate bugling/chuckling. Playing the wind and getting in close before calling are the two biggest factors for me this year. As much as you can read and learn from of the info out there, nothing will replace the actual experience. I'm 10X the elk caller that I was 4 years ago, but as Paul says, its all about timing and when to use what! Can't wait to keep on learning these things...

Nice bull Congrats
You must log in or register to reply here.