What are you guys using to mount your euro mounts? I’m looking at the Skull Hooker, but it appears it sticks out far from the wall.

Skull hooker is nice, but you're right about it sticking out far from the wall

I just run wire through the holes by the atlas joint (base of the skull) and make a loop to hang over a solid screw. 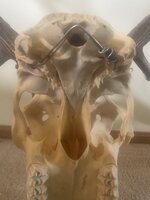 Just drill a small hole and put screw in the back for whitetail euros.

It depends on what look you're going for. For an elk the Skull Hooker does stick out but it has to in order to give it that "natural" presentation of the head & clearance for the antlers. I think it looks way better than having the head flat against the wall but that's just my opinion.
S 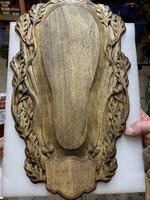 i decided to make my own, took a few tries but I think it works good. I dont know how it would work with an elk though.
C 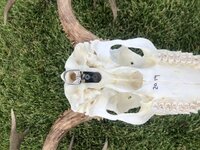 No matter what you do you need to anchor an elk to a stud or it will end up falling. Deer it doesn’t really matter as much if you have a decent connection. Elk euros are heavy and will pull out screws and sheet rock anchors.


These are the best I’ve used. I’ve done multiple diy versions and have a couple of skull hookers. The skull hooker is great for corners or large rooms. I prefer to have them tight against the wall though.

A bow hook threaded in the wall also works well, just put it into the brain cavity and you’re done. For smaller animals like deer just a long screw at and angle works well, just put it in the wall at like a 60deg angle and hand the skull on though the brain cavity. I’ve used lag bolts and bow hangers on elk a lot but they make big holes in walls. That dead on display is super quick, solid and easy.

These were just on small bow hangers and the deer in screws. Skull Hooker in the corner here and in the top picture. Here is the dead on, I put it on a board to span the studs so I could center it on the sheet rock. 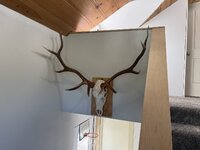 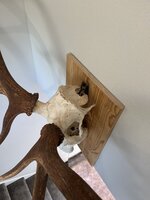 Display your European Elk Skull with the MOST SECURE skull mount hanger on the market! -Our Skull hanger locks internally with PATENTED technology!

Ended up going with the Skull Hooker. I’m extremely happy with the result and like how it sits at a more natural angle as opposed to just laying flat against the wall.

BrentLaBere said:
Skull hooker is nice, but you're right about it sticking out far from the wall
Click to expand...

They have a short arm option for smaller bulls that is half the distance off the wall.

nphunter said:
No matter what you do you need to anchor an elk to a stud or it will end up falling. Deer it doesn’t really matter as much if you have a decent connection. Elk euros are heavy and will pull out screws and sheet rock anchors.
Click to expand...

I have a 270ish bull on a Skull Hooker just using sheet rock anchors (Toggle Bolt Drywall Anchors, as pictured below). I remember I weighed it and confirmed it was well within the capabilities of the anchor and the sheet rock. It has been up for 2 years and hasn't fallen yet, fingers crossed of course. I used a 1 in floor pipe plate to the board and a 6 in threaded pipe onto that.
The 1 in pipe goes into the back skull hole.
Alittle hogging the hole out was required. but very little.
I did have to weld 2 stop spot welds to keep it from spinning on the pipe , bit I think 2 spots of JB weld would work too. 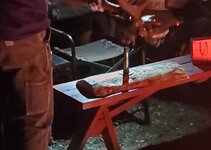 I like the dead on display hooks. Strong as can be and a simplistic design. 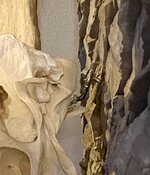 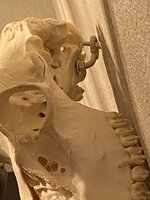 High tensile copper wire threaded through the atlas and stabilized with additional wire. 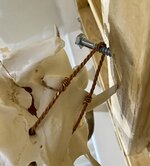 No problems with this set up yet. On my elk. 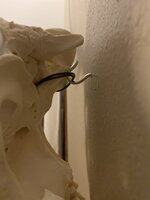