Went out with my son for a private land fallow hunt on the weekend. Definitely different country than we were used to hunting. This was an invitation to hunt the properties managed for fallow deer, so we were only allowed to shoot does, or cull bucks (ie no spike bucks, no bucks showing the potential to develop into a good trophy, or any trophy buck). So we had to positively ID any animal to work out if it was a shooter, then get after it if once we were sure it fit the criteria. We were hunting with a local volunteer who was showing us around, and also giving us the okay to shoot an animal.

We got out late Friday afternoon and stalked along a fence line that was clearcut about 20 meters on either side of the fence, with good feed growing along the cleared area. There was a lot of deer sign crossing the fence at various points, though not as much fresh activity as we were hoping for. After walking a few kilometres, we saw a doe, but didn’t get a shot. Then a little further along the fence we found a buck facing straight towards us with really nice spread on his antlers. I ranged him at 220 meters, but I thought he was off limits as he looked too good for us to shoot. Eventually he turned broadside and I could see his palms were a lot smaller than I had expected, so he was a legit cull buck. But by the time we identified he was shootable, he had had enough and moved off into the scrub, never to be seen again.

Working the fringe cover in the light rain looking for deer feeding in the open: 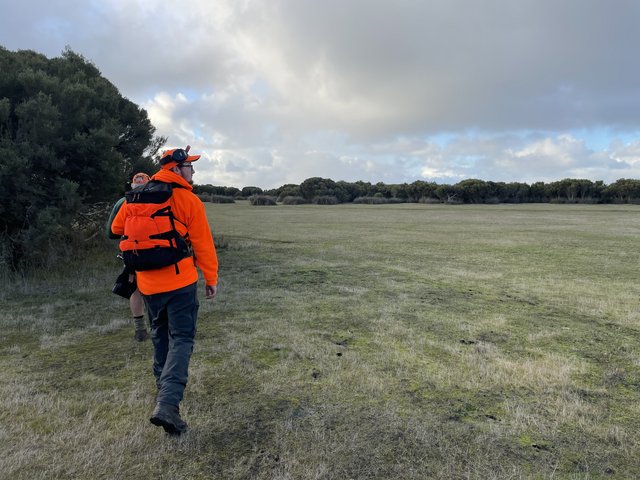 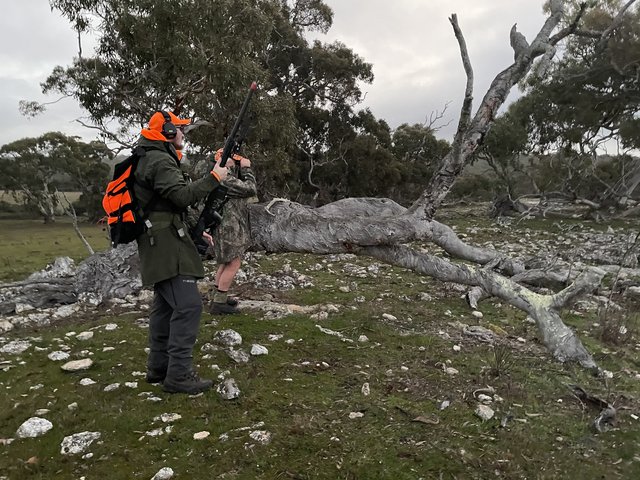 Saturday morning, we walked through a large section of heavy growth on the property that was known to hold good deer numbers. Temperatures were around 2-3 degrees Celsius in the early dusk, and wind was very light. We walked with the wind mostly in our face, but it would swirl around through the morning enough to give us away making stalking difficult. During the morning we saw glimpses of deer, but only though thick cover and mostly with the deer already moving. Towards the end of the morning, my son got onto some deer that he thought were does, but when he checked them through the scope, he realised they were spike bucks, so no shot there.

Seeing good deer sign, but not many opportunities on deer 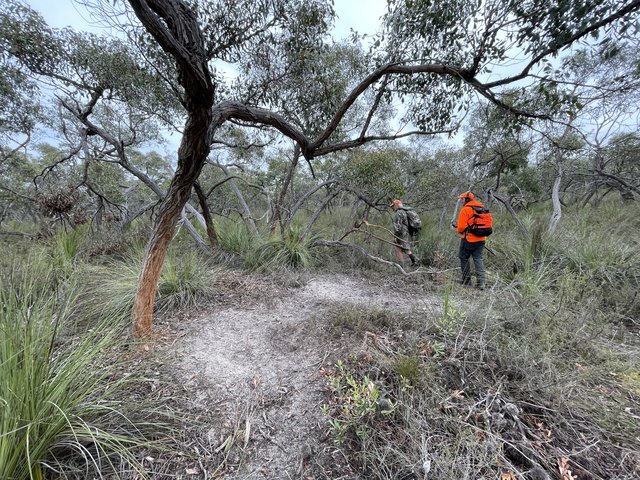 Saturday afternoon, we were back on the same fence line as the evening before. We sat over a heavy game trail until the sun started to set. With no deer sighted, we decided to still hunt until we ran out of light. As we crested a hill, my son spotted some does feeding below us. I ranged them at 330 meters, so we started to move to the top of the hill to find a solid shooting position. As we moved forward, we saw two more does feeding further to our left, with one at 223 meters, and the other at 218 meters. 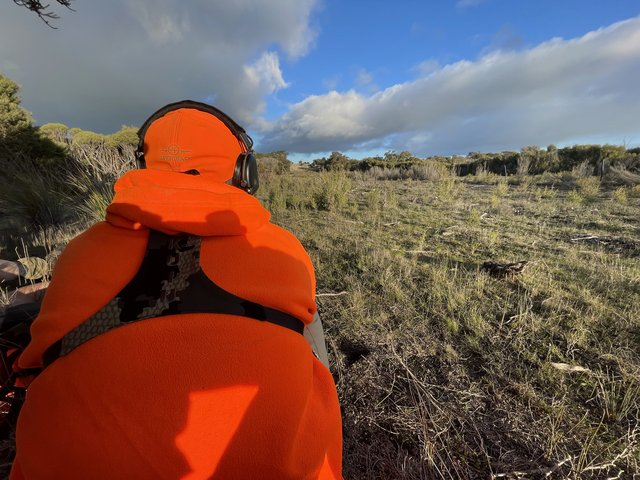 My son inched forward until he could get steady in a seated position on the deer at 220 meters, with the rifle on a carbon tripod via the ARCA rail on his chassis. With one doe broadside, and the other tail on to us, he took a shot at the broadside doe. I could hear the bullet impact, the deer reacted, but sprinted over the clear ground and out of sight in the thick cover. The second deer turned broadside and looked in the direction of the shot. As my son fed a fresh round into the chamber, he moved onto the second doe and took the shot. I heard the slap of the impact and saw the doe drop on the spot. 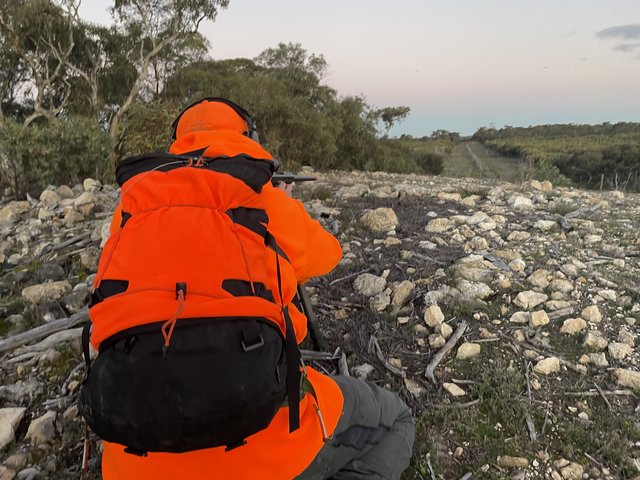 As we walked down the hill, we found our second deer dead on the spot, and we cast around for sign of the first deer. At the edge of the brush, my son found blood. Heavy, thick blood that told me the deer was dead on its feet. Another 10 meters forward and I found it piled up under a tree. We gutted both deer as the sun set, then started dragging them back to our car. The recovery was tough as we had to slog through sections of thick bush in the dark. At one point I looked up to see a red light through the bush. I couldn’t work out what I was seeing until my son commented that it was the last light of the sun coming through the overhead cover. 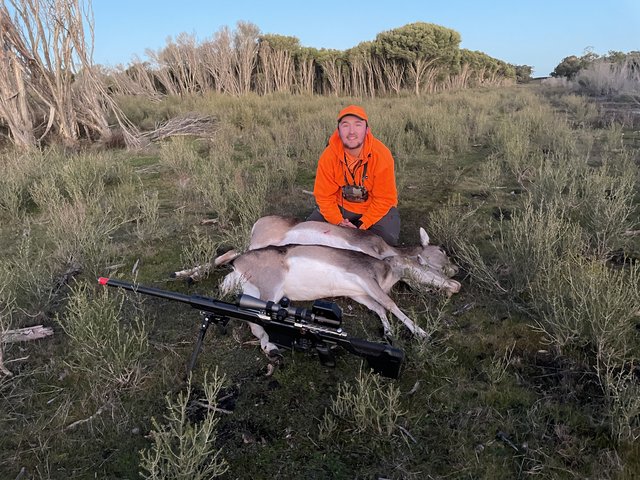 Sunset as we recover the deer 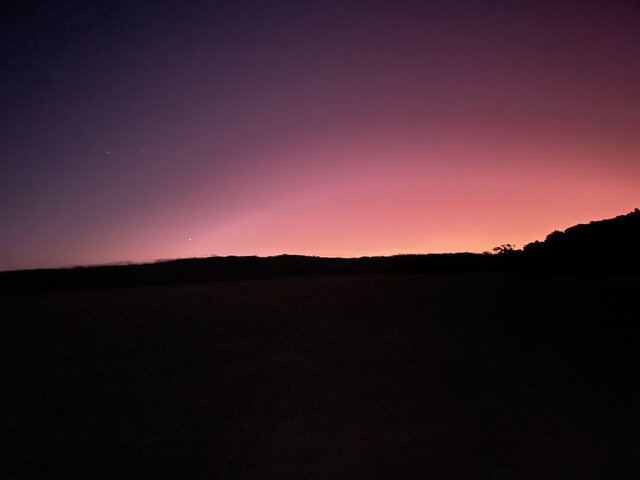 We got out again Sunday morning – our last chance to find a buck. We had a cold, clear night, and temperature before sun-up was zero Celsius. We walked out to an open paddock in thick fog. After an hour or so of walking, my son spotted a group of deer crossing a fence line about 150 meters in front of us. We were still in fog, but had no other cover on the open ground. Even in the dawn light and fog, the deer saw us and headed back the way they had come. We walked further along the fence line, and found the same group of deer heading back to cross the same fence further down the paddock. We got set up for a possible shot, but the only buck that gave us an opportunity was a trophy animal, so off limits to us. Since we had to skin the two does from the night before ahead of leaving, and then drive almost 7 hours home, we ended our hunt and walked back to camp. 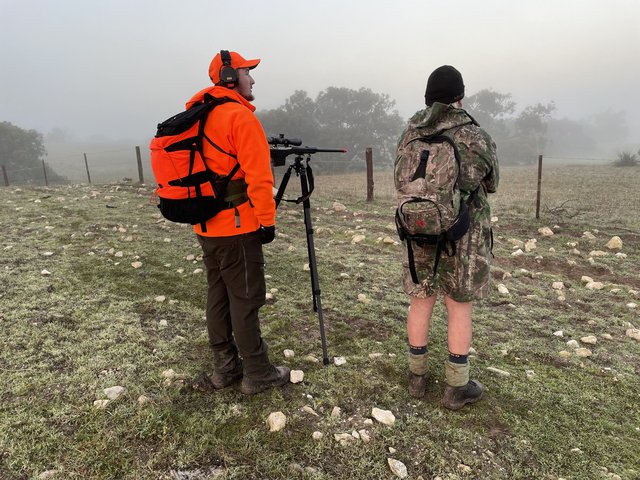