MokeBerserker said:
@FishfinderAK I havent bought one yet, but i just searched for “siphon bulb”. The one the OP uses happens to be an “enema” bulb lol, from what i saw. Didnt know it was a thing but now my wife will wonder why im looking for em on amazon hahaha. It wad the closest thing to a food safe siphon i could find. But I will definitely be adding it to my systems.
Click to expand...

Guess this systems finally brings water filtration into the "multiple" function category that everyone preaches.

Good write up Jake! Very thorough and informative. I know you're not an armchair quarterback either, you know your stuff! You probably spend more time on the side of a mountain that most in this forum. Others are saying you can build it for cheaper, but I've used other systems like the Sawyer and its cheap for a reason, its junk. I've had a couple and they never last more than a couple seasons. Had one fail this past year on the 2nd day of a 8 day hunt. Plus, they are a liability in cold weather.

How does the Aquamira Frontier Max hold up to the cold weather?
OP

HeadnWest said:
Good write up Jake! Very thorough and informative. I know you're not an armchair quarterback either, you know your stuff! You probably spend more time on the side of a mountain that most in this forum. Others are saying you can build it for cheaper, but I've used other systems like the Sawyer and its cheap for a reason, its junk. I've had a couple and they never last more than a couple seasons. Had one fail this past year on the 2nd day of a 8 day hunt. Plus, they are a liability in cold weather.

How does the Aquamira Frontier Max hold up to the cold weather?
Click to expand...

Thanks! I used this during spring bear season in MT last year, and all through Sept for archery elk, so definitely during some freezing temperatures. Its operational temperature range is above freezing, according to the manufacturer. The green line backcountry plus filters are hollow fiber style filters, so you wouldn't want to freeze them hard with water inside. I have definitely pushed the limit on that a bit. I filtered a couple times in wet snowy conditions, I'm guessing between 30+32 degrees? If it's freezing at night, I always throw whatever filter I'm using in my tent or sleeping bag (depending on temp). Basically every filter on the market for backpacking is a hollow fiber filter, and if they freeze hard with water inside they will be compromised.

Here's a link to the manufacturer specs on the green line "backcountry plus" this is the upgraded version of the filter I used up in mine. Looks like they improved the treatment capacity a bunch. It'll be interesting to see how much more water that translates to on the mountain before it clogs up..

The Frontier Max is the ultimate in-line water filtration kit. Adapt it to bottles, bladders, gravity filters & DIY setups to get virus or bacteria protection your way.


Sent from my Pixel 3 using Tapatalk

Lot of good points mentioned, both pro and con.

I've got a little bit of experience with the bag but before I get into it I'll go ahead and say that I am "affiliated" with Jason, he's my nephew. We have hunted together over the years, when his deployments would allow, mostly elk and deer out west. Just to be clear, I did not get a free bag (still a little pissed). He did front me a hat though.

Like a lot of guys have posted, I already had a good selection of water filtration that really didn't need replacing. Katadyn Hiker Pro, Steripen, Sawyer, Katadyn Base Camp, Be Free, drops, tablets. All of these are perfectly capable of the one thing they are designed to do. With that said, I am always looking for gear that solves more than one problem, i.e. can it be a back up to something I'm still going to carry or can it replace something I can now leave at the truck?

So, in addition to water filtering (which, I agree, big deal it does that) what else have I used it for:

1) Sleeping pad bellows - using it to inflate a sleeping pad was nice. I think I had to trim the adapter that came with it to fit my XPED but it worked like a champ. I know this function really didn't eliminate anything in my pack but it made relocating and getting camp set up at the end of the day a little easier.

2) Bear bag - using it to hang my food. No big technological break through but I can get 4-5 days worth of food in the bag and it's heavy duty enough that hanging it off a limb with some paracord is not a problem. I was using a sea-to-summit ultralight dry-bag for this previously.

3) Glassing Seat - since the filter is separate, the bag will lay fairly flat and is heavy duty enough that, with reasonable care, you don't worry about punctures. I was in New Mexico last year when that early snow storm hit during the first archery season. I stuffed a puffy in the bag and it was nice having a dry place to put my a$$. Folds a little flatter than the Thermarest Z seat I have but probably not any lighter.

4) Trash bag - stuff all my trash in it for packing out. Again, the bag is heavy duty enough that you can stuff it with mtn house bags and food wrappers then crush it down to the smallest possible size for coming off the mountain. I've also put wet clothes in it to keep the inside of my pack dry. The bag is rated for boiling water so cleaning up afterwards is pretty easy.

5) Adding also that the most obvious use is just general Dry-Bag function. On some really wet trips in Montana I've stuffed my Marmot Helium and spare clothes in it to keep them dry packing in and out. For float trips it does double duty also as I'll keep spare clothes, camera gear, etc. anything I don't want to risk losing or getting wet in it. I've had mine since 2017 and it's held up pretty well considering it's just laying in the bottom of a drift boat.

I don't have many photos of it in use on hunts as I'm really there to kill something not do gear reviews. I found these from a Wyoming trip when I used it to inflate my sleeping pad and then as my bear bag. 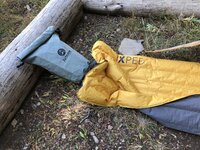 I have used a Katadyn Base Camp for backpacking for years and don't really see how this thing is any better but it costs twice as much...

Also, as a chemical engineer, I don't see why the priming bulb would be necessary to get the flow started or why it would increase the flow rate. Gravity is doing all of that for you. Have never had any issues with flow rates when using the Base Camp.
You must log in or register to reply here.