A lot of things came together to make this happen, I’ll start at the beginning. I’ve wanted to get into big game hunting for a long time, but couldn’t afford to buy a rifle a scope to get me started. I’m a fishing guide, and last year, I was telling this story to one of my clients, and chatting about what I might want to buy in the next couple years when I got the chance. He told me my “homework” was to look into the Ruger American in 7mm-08. I didn’t think much of it, and I was spending all my time learning about rifles anyway, so I did some reading. The next morning, he shook my hand, and asked me if I had done my homework. I said “sure! Looks like a solid deer rifle. Not too far off what I’m looking for”. He said “great! I have one on the safe at home I don’t use, I’ll mail it to you when I get home!” Two weeks later, I’ve got the rifle, already scoped with a Leopoldo fixed 4x, and a couple partially used boxes of ammo waiting at my ffl for pickup!

Fast forward to hunting season. I had tested a bunch of ammo, and gotten my best groups, about 1.2”, from federal power shok, which was conveniently sold at our local hardware store. I spent a week looking for cow elk in their winter range, but the weather had been warm and the migration hadn’t happened yet. I was bummed out, but it was time to head east to see family for thanksgiving. Luckily, I had been invited to deer camp with the in-laws!

NY opening day, I was dropped off by my FIL and BIL at the tree stand closest to the road on their way in to their spots. I watched the sun come up, and sat for a few hours hearing shots on all directions. Around 8:30, I saw a doe and fawn pass on my right (no doe tag, but wasn’t prepared for that shot), so I readjusted and set up using my hanging pack as a rest for the weird angle. Later on, a little after 10, I saw movement over my left shoulder, and looked back to see a buck trotting out of a hedgerow straight towards me, with a doe hot on his tracks. With no experience judging deer, I saw antlers, and got ready to shoot. He came in to a lane at about 50 yards, and I took a shot with him quartering towards me… a little too far back. The buck fever was real. He bolted to the same lane I had seen the doe in, and stopped to look around. Luckily I had been practicing racking the next round directly after my shot, and I was ready. Shot again, hit both lungs, and dropped him where he stood.

I texted the family, and they started heading my was to help me field dress it - I married into an awesome family. After making sure he was dead, I sat with him for a while, just appreciating the moment and admiring the bigger than expected buck. When my BIL showed up, he stopped and said holy shit, that’s a big deer. Turns out, it was the first 10 point, and biggest deer they had ever shot on that lease (after 23 years of hunting it). 200 lbs field dressed. Whoops!

Luckily, our host is a nice guy, and I’m invited back for this coming season. I think I’m gonna buy them a new tree stand to say thanks, any other suggestions? 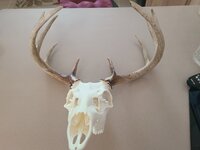 Awesome first deer! You must be a great guide/guy for your customer to send you that rifle. Congratulations.
OP

Mike Islander said:
Awesome first deer! You must be a great guide/guy for your customer to send you that rifle. Congratulations.
Click to expand...

Thanks! I’m no better than the next guy, some people are just east to connect with. I just fished with the same guy last week, it’s always a pleasure.
T

Congrats! The tree stand isn't a bad idea. Guessing is the camp has been going for 20+ years they don't need too much. I think the best "thank you" for them would be to show up next year with plenty of food to share, and a fine bottle of something for after the kills.
W

That's a great first deer story! No one ever forgets their first!
OP

I guess to finish, this ended with ~82 lbs of delicious venison in the freezer, and lots of fun in the kitchen. Does anyone else use Hank Shaw's recipes?

Thanks! Getting closer every day!
B

That's a damn fine buck and congratulations! If the folks in camp enjoy libations, I echo @Laramie above about bringing a nice bottle or two to share this season. Some of my personal favorites for deer camp include: