Finally managed to find and get a shot on a high country mule deer during the WA state high buck wilderness hunt. This was an opportunity I've been hard after, so finally being able to punch a tag was nothing less than an epic experience. I knew the high country basin style hunts where the deer aren't on their feet for long during daylight would provide limited windows of opportunity, and possibly some longer distance shot opportunities. So for the last few years I've been really concentrated on loading and shooting consistent.

I took my Kampfeld Custom 280ai that's shooting 162 ELD-M's at 2800fps, and it's first shot at an animal didn't let me down. We spotted 5 bucks, 4 of which were legal (3 point), and I honed in on what I assumed was the most mature buck in the drainage that morning. WA doesn't provide for the greatest trophy potential, and with a 4%-ish success rate on this hunt I wasn't about to try and measure success in inches. I scrambled down the hill before the sun crested the ridge and attempted to close as much distance as possible. At about 600 yards I realized that was as close as I was going to get without going backwards and either wasting too much time or risk blowing them out of the drainage. I set up on a rock and locked onto my buck, ranged the opening he was now feeding toward at 527 yards, zipped my turret and checked wind, got level and solid, and as soon as he walked out and paused between steps while feeding I squeezed one off. A little bit of muzzle jump because of the awkward bipod on rock situation didn't allow me to spot my shot, but I watched 4 of the 5 deer scatter out of the bottom and had a confident feeling that was a solid shot. I found him less than 20 yards from where I dropped a pin on OnX. The entry was a little further back than intended but still in front of rear quarter with no meat loss, but the exit was dead center with lots of lung blood expelled. I process using the gutless method, so after breaking down one side and rolling him over pure devastation flowed out of the entry and gave me absolute confidence in the ELD-M. I wish I would have taken more pictures to document but it was getting fairly warm with a clear blue sky, and we still had to break down and pack camp on top of meat and pack the rest of the way out.

I'm extremely satisfied with the rifle and load performance, and glad to finally punch a tag on a high country ghost. 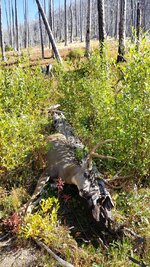 Great buck Harvey! Don't you know that you're supposed to take pictures before you split them up the back?

WeiserBucks said:
Great buck Harvey! Don't you know that you're supposed to take pictures before you split them up the back?

Thank you!! I know it looks like that and I didn't catch it til later but that's actually the log he died against just behind us!
W

What is your barrel length and load?
OP

eoperator said:
What is your barrel length and load?
Click to expand...

SWEET!!!!
Congrats on a great buck and thanks for taking us along.

That is a nice buck and congrats!!

I would have no issues shooting that buck. Glad you got him. A reward for all your time behind the gun.
M

Congrats on a nice buck!!

Congrats on a nice deer, Nothing like a good 5-600 yard shot ,putting in range time now on a 300 win. mag for a 2023 hunt so far so good and still have a year to hone the skills. Always hope for a shorter distance but having the skills for longer shots is very comforting.

Thats a dandy! Especially for that hunt. Congratulations. Man, it was tough this year. Seems every year it's just a little crazier. Those PNWild boys need to quit posting videos its getting way too popular.
F

Congrats on the dandy buck! Thanks for the write up!

Great job Harvey!
I saw a few bucks being packed out, but nothing the size of yours. Was this an opening day buck, or later on in the season? I didn't get out until Saturday and it feels like all the deer were shot the first couple of days.
OP

PanhandlePilgrim said:
Thats a dandy! Especially for that hunt. Congratulations. Man, it was tough this year. Seems every year it's just a little crazier. Those PNWild boys need to quit posting videos its getting way too popular.
Click to expand...

Thanks man! Yeah that's a double edged blade for sure..


MHWASH said:
Great job Harvey!
I saw a few bucks being packed out, but nothing the size of yours. Was this an opening day buck, or later on in the season? I didn't get out until Saturday and it feels like all the deer were shot the first couple of days.
Click to expand...

Thank you! I got mine on the morning of the 21st, we had eyes on deer the first day in and had been preparing but when I spotted my buck I threw caution to the wind and moved as quickly as possible. Luckily it worked out!
OP

Thanks everyone! Something interesting to note, judging by teeth wear this buck may be older than I originally estimated. On any mature animal I send teeth in for tooth age analysis to provide data for the department, and because I think finding a mature animal in such a high pressure state adds to the trophy factor regardless of total inches. This buck has very similar wear to one I took a few years ago that was a 7 year old warrior. Interested to see the results!

Well done!
You must log in or register to reply here.

Help me choosing gun, caliber and ammo for long range hunting in the italian hills