This was my first year being able to pull a tag and hunt mule deer in Wyoming after making several western trips to do Pronghorn and OTC Elk. If I was to keep it short....I am absolutely hooked.

On the first 2 days we spotted some nice deer but were never able to close the distance or get a shot. On the 3rd day it all came together.

The first deer we found was a 3x3 that was still in velvet that we found in a hell hole on the side of a canyon about 3/8 of a mile away. After a lot of discussion we determined the best approach was to try and come peak over the top at full draw and shoot him. It was going to be under 10 yards. Made the entire stalk got to the spot where I thought he was, came to full draw and slowly came up over top. Well turns out I was thinking he was about 5 yards higher up the draw than he was. By the time I realized where he was bedded he was already blowing out the bottom into the canyon. Nonetheless I was hooked at this point.

Walking back to the glassing spot we peaked over the other side and saw a big bodied 2x3 just laying near the top of a ridge out in the open in a very stalkable spot. Being my first mule deer hunt I would of been thrilled to death to shoot anything so away on the stalk we went. Eventually we got to the back side of the deer and could peak over the top of the ridge through some sage brush. After about a minute I found his antlers sticking up and realized he was probably between 7-10 yards.

I came to full draw and had my buddy throw a rock over top of him and land in front of the deer. As the deer stood from his bed I released an arrow and watched the white fletching disappear behind his shoulder. The deer ran about 40 yards down the ridge, turned around to look back at us and fell over dead right there. 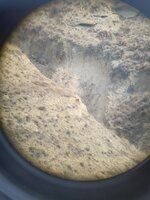 This was the first stalk on day 3 that was unsucessful. 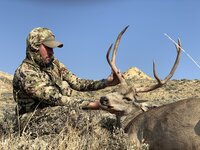 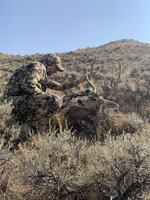 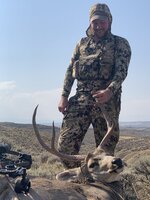 Thanks for the trip report, sounds awesome! What thoughts/tips do you have for others embarking on their first mule hunt? Anything that surprised you or you wish you had better prepared for? Anything that was maybe easier than you were expecting?
E

Thanks for taking us along and welcome to the addiction!
N

Congrats on the buck! Loved to hear about it!
J

Congrats! That sounds like a blast. I'm heading out for my first muley hunt this year as well, but with my gun. Like you, I've taken pronghorn in the past, but expect this to be a whole new ballgame. Can't wait!
B

Congrats on the buck!

Good buck! Thanks for sharing your story

Awesome Work! I will be out there next week.
S

Nice buck and the story brings back lots of memories for me. My son and I just got back from a Colorado muzzleloader hunt. I've been hunting this area since the 80's and have had many encounters of 40 yards or less. Brought home a couple decent bucks over the years with everything working out. I've looked at situations and made plans as to where they might head when kicked out of their bed. Gotta laugh at those plans since the deer are unpredictable. Came home this year empty, but as I tell my son if we bring one home thats a bonus. Just getting away from the BS and doing some hunting is all that matters. Good luck to all in their hunting ventures this season
You must log in or register to reply here.

M
Nebraska Mule Deer? Worth it with low expectations?
2