Last weekend I finally got in to some mule deer. This is my first year hunting them archery. I am a 50 year old late onset hunter and have been after elk for about 4 years now. Anyway had several opportunities last weekend and man it was a blast.

The area I am hunting is rolling prairie with scattered junipers and deep arroyos and canyons. I drove out early Thanksgiving morning and got started around 10 am. I went to an area where I had seen a large muley the weekend before and spent the day still hunting through the juniper groves and finally at the end of the day posting up on a flat area between two arroyos (where I had previously seen the buck) where there is evidence of heavy traffic from one arroyo to the other. Sat from about 3 'til last light and struck out.

The next morning I went to another area and my plan was to get up on the upper plateaus and glass down in to some of the deeper canyons. It's probably about 8:30 by the time I get there and I get geared up and grab my spotting scope and walk the 1/4 mile across the prairie to the rim of the canyon which is where I make my first mistake.

I approached the canyon rim pretty lackadaisically and as I approached the rim an explosion of activity happened right below me. A group of about 9-10 does followed by a spike buck ran up to my left (orange line on photo below) up and over the canyon rim. I immediately dropped to the ground but the damage was already done. I knew there had to be a larger buck there somewhere and sure enough I caught a glimpse of him running off down below about a 1/3rd of the way down the canyon wall, a large wide 4x4. I am now laying on my back so that I am not skylined and I pull out my binos to follow him. He runs along a rock cliff (green line below) and eventually picks a line that goes up to the top of the rim out near the end of a point. He stands there for a while staring right back at me. After about 10 minutes he disappears over the back side of the canyon rim. I'm thinking that he has to be thinking about his does so I continue to watch through my binos in case he tries to make his way back. After another 10 minutes or so he reappears back down the canyon wall coming around from the back side (red line below) and heads toward a group of junipers. He stands in the open for a good ten minutes staring back at me and where I am at and eventually moves in to the junipers where I can no longer see him.

This whole time I am running scenarios through my head of what to do, should I stay and wait, should I make a move? After another 10-15 minutes of watching the juniper grove I decide to back out of my location and get behind a juniper tree behind me so that I can get my scope out and see if I can get a view of him in the trees. I slide myself out on my back up the low rise behind me about 20 yds trying the best I can to avoid the prickly pear and other nasty thorny ground cover that I can. I get behind the juniper where I can finally stand up and move around a bit and get my scope set up and scan the junipers. I can't see him.

He has now been in the Junipers for about 45 minutes so I decide to make a move. My plan is to loop around the top of the plateau (purple line below), descend the back side of the canyon just as he did and wrap around following his path to get to the junipers. I get atop the plateau and make my way across to the back side, about a mile or so walk and then descend down the back. Right off the back side I run in to a game trail with fresh tracks so this is a route they take quite often. I get about a third of the way down the slope and continue to follow the trail around the point. At this point I can now see the tops of the junipers and I also realize that I am making way too much noise so I decide to drop my pack. It was cold out that day so I had extra clothing on and getting the pack off ended up being a struggle in itself which also created more noise than I would have cared to. Anyway I start my stalk in from the back side (purple line below) taking one step at a time. I was struggling on the steep slope with the loose rock interspersed within the grass, basically I have one arm out touching the uphill side and was trying to take one well placed step at a time. I made it to where I could fully see the junipers now and began scanning where I thought he was and at just the moment that I picked out his ear and antler he jumped up and took off straight down the canyon without stopping.. Junipers across the canyon through the spotting scope: 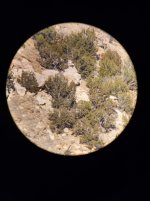 So I watched him hit the canyon floor and then continue all the way across the canyon to the wall on the opposite side before he stopped and took a look back.

Anyway.. I felt like I had a great plan but my execution was bad at the very end when it mattered. This whole thing took a time period of about 3 hours from beginning to end so I decided to pull out an MRE and eat lunch right there on a nice flat rock. Looking back and thinking about it while eating I should have paused and took a good 15 minute rest when I got to the point where I could see the junipers to allow things to settle back down as I'm sure he heard me coming in a long ways away. Knowing what I know now I probably also should have taken off my boots at that point however I was not prepared for doing that, I only had my thin socks that I was wearing and the ground there had all kinds of nasty things that like to stick in your feet. On my approach I should have then taken a small step at a time giving each step a good minute or two or more, the buck was likely settled in and not going anywhere so why rush? I also found my bino harness which I left on to be a hindrance, it definitely made it difficult to look down and pick clear places to place my feet, I may ditch that as well the next time I have the opportunity.

The next two days brought a couple more similar but much tougher stalks across open juniper grassland, probably a waste of time but was good practice to see what I could get away with. I repeated my first mistake again walking up to another arroyo where I again busted out a group of deer that were bedded under a couple junipers that had rock walls on either side of them right at the head of the arroyo.

Here is another guy about 320yds away through my binos that I tried to close in on. 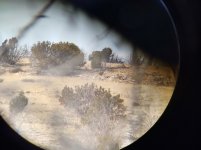 And another guy on the last day: 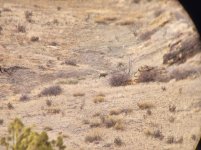 The season is closed right now and reopens again on the 12th and runs through the end of the month. I will be back there and hopefully they are still just as active as they were last weekend.

Any stalking tips are appreciated! The country is big and wide open, the opportunities are there though difficult at best. Thoughts on various stalking boots, decoys yes or no? Knowing that the first buck took a deliberate route around the back side of the canyon and that there was an established game trail off the back side it appears that he has used this group of junipers before, what would the odds be that he would be back in there on any random day mid afternoon?

I thought elk hunting was fun but chasing these guys around the canyons has been a blast. If I had a rifle I could have easily connected on half a dozen bucks over the 4 day weekend.

In that type of open canyon country I would continue to glass then spot and stalk. Wait for the bucks to bed down then try to anticipate where they will exit those little stands of Junipers. That way you can take your time being quiet once you get in close. I haven't personally ever rattled or used decoys for Mule Deer during the rut so I won't say it wouldn't work but that country really lends itself to glassing and that's what I would continue to focus on. If the rut is in full swing that buck, or other bucks will be back as long as the does are there. Last week I watched a really great buck get shot at during a rifle season and two mornings later he was back in the exact same spot with the does. Blew my mind.

I would never take my boots off out there in cactus land, but I'm a sissy.

Best advice is to take it slow! Wait for him to bed and always play it safe. Go the extra mile to stay out of sight and smell
You must log in or register to reply here.