Well, I can say now that I’m hooked. Being from the Midwest, mule deer haven’t exactly been on my radar/hit list. Having started a new business a few years back I figured it would be quite some time before I’d be able to travel to hunt. Then a few months back I was given a “gift” of a mule deer/elk hunt in Colorado for the 3rd rifle season. The outfitter was Rocking R Ranch located just outside Norwood. I had never been on a guided hunt and have nothing to compare it to but this outfitter was absolutely first class. I had an amazing time getting to know the crew over there and learning both elk and mulies from their guides.
On day 2 while glassing a meadow we spotting a nice looking buck at about 1600 yards chasing some does. We skirted down the trail to about 150 yards and confirmed that indeed the buck was a shooter. There weren’t any crazy dramatics, just a clear 135 yards broadside shot with my .300 wsm. The accubond did the trick and the buck went about 40 yards before tipping over.
After walking up to the buck the guide quickly turned and said, “I don’t think you realize what you just shot”. He was in fact right. He was green scored right at 180” by two separate people with 26.5” and 27“ main beams. All of that doesn’t mean a whole lot to me but they were very excited.
The elk turned out to be very tricky with the lack of snow in that area. They were spread out all over up high and had little motivation to come down to the private land they have to hunt. With 6 hunters in camp, we all got our mule deer and I was extremely happy when a father son combo got a couple elk on the last day. Really cool story there but not mine to tell.
All in all it was an amazing hunt where I learned a lot about a couple species I’m now hooked on. If anyone considers Rocking R as an outfitter, please reach out and we can chat.
Now I have a couple weeks at home before I heard out on my desert sheep hunt that I won through Epic Outdoors. Best of luck to anyone who has tags left!! 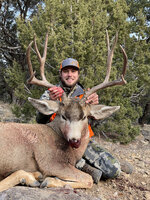 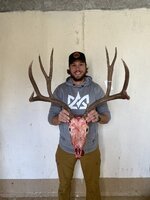 Great buck. Sounds like your having a heck of a luckily steak hopefully it continues right into your sheep hunt.

Nice buck congrats!! Good luck on your sheep hunt let us know how you do!!
H

Congrats and continued good luck on the sheep hunt!
E

Sent from my SM-G996U using Tapatalk

Congrats on the awesome buck and best of luck for your sheep hunt.

Congrats on a great buck and recap of your hunt!
You must log in or register to reply here.