Lets see them everyone!!! I know its kicking and I am sitting in the springs just hoping I caught our 6X7 170" on my trail cams the last two weeks! My customers are filling my phone and email with photos!
OP

Back-2-Back years out of the same tree!!!
OP

Tim getting it down on the family farm! From the north side of the river!

Tim on the south side of the river on the farm the following morning!!! Some great whitetails congrats Tim!! This is the result of putting on new strings and cables and changing our entire setup around 2 weeks before a hunt and trusting it!!

Tim has history on his place with both of these bucks. The top buck was dubbed "The Six Pack Buck" and the heavy 8 "The Sticky Buck". Both bucks showed up in 2010 and Tim has spent the last 3 years hunting these two bruisers. "The Sticky Buck" was aged at 7.5 and was regressing with impressive 7" bases. This battle tested bruiser surely left you some great genetics Tim!!
OP

Well I'll tell you what...I sure wish I would have had a tag in my pocket last week but I filled it early and just had doe tags! I harvest this doe at 32 yards and 30 minutes later I had a 145-150" 10 pt running 3 others over the top of her in front of my blind. Love this time of year!! Meat in the freezer and couldn't be happier!!! 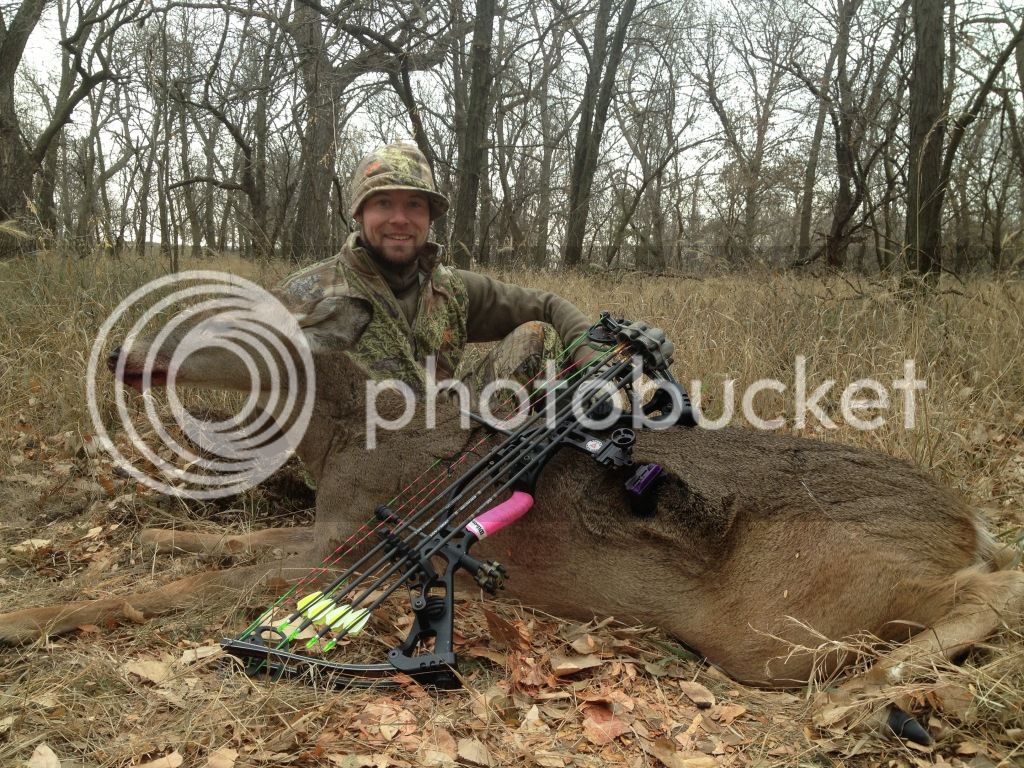 My brother still has a week to get it done, lets hope he can do it!

Congrats to all on their successful seasons!

I will praise God's name in song and glorify him with Thanksgiving!" Psalms 69:30

IAHNTR
Dude, you 'da man! Love the buck and the bow and the cornfield and the buddies. Really good lookin' buck. Good job. Yardage? Method? Have you taken better?

robby denning said:
IAHNTR
Dude, you 'da man! Love the buck and the bow and the cornfield and the buddies. Really good lookin' buck. Good job. Yardage? Method? Have you taken better?
Click to expand...


Thanks a ton Robby - I'm just getting back to RS a little more since I put one down.

The other 2 in the photo are my father and brother. I was actually hunting over a couple acres of standing beans and had the decoy out, but as always he came in from a way that I wasn't expecting and ended up never even seeing the decoy. I had seen this buck about an hour prior messing with a doe at ~90 yds and threw out a few grunts and even a snort wheeze. He wasn't responding to these at all, left the doe and walked out of my life (so I thought) back into the thickest of thick multi-flora rose choked timber. After that encounter I texted my brother, who was at his desk job, that I had just saw a 150". I was giving him updates every half an hour.

About an hour later I had a small 8 (4x4 in western talk) work through the recently cleared timber behind me. After he moseyed through I gave it 10 minutes and hit the rattling antlers together pretty hard for a good 15 seconds. It wasn't 3 minutes later and this buck came from where the small 8 did, which was over my right shoulder. I only had a small window of opportunity in that direction and had to spin around on the seat and draw before he was behind a large red oak that still had most it's leaves and was impossible to shoot through. It was a really fast encounter and I wasn't sure of the yardage when I shot. He ended up stopping on his own. I had my HHA sight (single pin) set at 40 and I knew he was more like 30. I aimed about 3 inches high and let it fly. He was quartering to me hard and I put it on the front of his right shoulder. The pink nokturanal nock showed me that I put a good hit on him as he tore off. After a 70 yard dash he got wobbly and tipped over with in sight. The encounter happened so fast that I wasn't even sure he had a left side. I just saw all the bone upstairs and immediately went into kill mode.

After I saw him tip over I got all shaky and crazy like - you know the feeling, and had to sit down for a minute processing what just happened. I then sent out another text; "Giant down". I proceeded to call my father who lives 15 minutes away to see if he could come and help load him in the truck and in a matter of a couple minutes he was on his way. By the time I got all my stuff out of the truck and all my phone calls made it was dark. I knew the general area in where the buck expired, but like to follow the blood trail anyways. I was half way to where I thought the buck was when my dad joined me and we walked up on him for the first time together (that was really cool). After a few photos we got the truck as close as we could and drug him the rest of the way up the hill to the truck (35 yards). Getting back to his place we weighed him at 250 live weight and 200 gutted. In boning him out I found that I hit a half an inch in front of the ridge that runs vertical, perpendicular to the scapula and passed through both lungs. The broadhead broke off the arrow and was lodged under the skin on the off side.

I am very glad that I was using a fixed blade (Shuttle T) broadhead because it did pass through some of the scapula and the blades were pretty bent up. I'm not sure if I would have got the same penetration with a mechanical. After the shot I ranged where he was standing and it ended up being 29 yards. He is my best whitetail (second buck) by 18 inches and probably my best kill to date. I tried to do a European myself on him and took him to a guy that has the flesh eating beetles to finish him up for me. I'll post a picture when I get him back. The picture in the corn is actually in my dad's backyard where he grew some popcorn corn that turned out great. I just liked that as a back ground.

Thanks for the comment Robby and all the live/semi live stuff you do. Now it's time to focus on muzzleloader season. Have a great Turkey Day!!
O

My buck, and my buddy's bear.

In God We Trust

Great bucks all. These pics are getting me excited for Iowa in 2 weeks!

Got back from Kansas a few weeks ago. Hunting was slow and I didn't even see a deer three out of five days on the stand. This old warrior walked out on the fifth evening and I let him have it from 35 yards. He won't score well but something tells me the stories this buck could tell couldn't be captured by a score. His face and neck were the whitest I've ever seen and he looked like a ghost coming through the woods!

Some great bucks there guys!

We just made it back from our annual Idaho Thanksgiving trip to visit the folks, and although the weather was a bit balmy we managed to bring home a little venison.

We actually had to interrupt Thanksgiving Dinner on Thursday to make a stock on the ridge behind the house so that Paulina could knock down her first buck...now she's hooked!