I generally will not watch 60 Minutes, but I saw that there’s going to be a segment regarding Grizzly bears on tonight’s show. I‘m assuming I already know how grizzlies are going to be portrayed in this segment, but may tune in anyway.


Montana hasn't seen this many grizzly bears in 150 years. That's because they were protected on the endangered list starting 45 years ago after years of aggressive elimination nearly wiped them out. But the human population has also grown considerably in the area between and around Glacier and Yellowstone National Parks, where the bears' numbers are coming back strongest. Bill Whitaker reports on how the giant predators and their human neighbors are getting along in a story of conservation and conflict on the next edition of 60 Minutes, Sunday, October 11 at 7:30 p.m. ET and 7 p.m. PT on CBS.

"Grizzly bears were listed in 1975 as a threatened species in the lower 48 states… They've probably more than tripled their numbers and their range now is more than double what it was at the time of listing," says Hilary Cooley, the Federal Fish and Wildlife officer in charge of the bears' recovery. Some conservation efforts include state officers trapping bears to outfit them with microchips for identification and, especially for females, with radio collars that allow monitoring of the bears' recovery. Whitaker and his team recorded the trapping, tranquilizing and tagging of a 5-year-old, 300-pound male grizzly deep in the wilderness of Montana.

Whitaker also speaks to some people who live near enough to the wilderness to be impacted by the giant predators. "We had 18 [bears] several years in a row in our cornfield and nobody believed that I had that many until they put cameras up," says Mission Valley farmer Greg Schock. The huge animals trampled and ate up to a quarter of Schock's corn. He says grizzlies live only a mile away from his home and he's resigned to them. "I think we have to… coexist… who's leaving? The bears aren't leaving and we aren't leaving," he tells Whitaker.

Bryce Andrews, a rancher, author and field director for a non-profit called People and Carnivores, helps put up electric fences to protect crops and livestock from bears. They are particularly voracious now, in the fall, as they fatten up in preparation for a long winter in hibernation. And they'll eat just about anything. "Anything with caloric value, a bear will turn it into what they need to survive," says Andrews. "Any and everything. They'll come for bird seed. They'll come for the residue on a barbecue."

Says Cooley, "Bears can be really hard to live with. They kill livestock. There are producers in that area who have 20, 30 cows a year killed by grizzly bears… it's a lot. It's a big impact."

The bears will come too close to humans on occasion; authorities will forgive first-time offenders, but repeaters are often not tolerated. "Bears can kill people. And it's something we don't mess with," Cooley tells Whitaker. "If there's a threat to human safety, we remove it right off the bat."

Cooley had to authorize the killing of nearly 50 grizzlies last year. "It's the worst part of the job… but it's necessary."

Sometimes the tables are turned and humans come too close to the bears. Anders Broste was nearly killed by a grizzly while hunting in the wilderness near his Montana home in 2018. He tells Whitaker what happened. "It bit my arm here, kind of thrashed it around and then bit my leg here. Started pulling on me and kind of tossing me around. And then it just dropped my foot and ran off," he recalls. "I literally remember his brown butt just running off into the woods." He spent six days in the hospital and endured three surgeries and years of physical therapy.

Broste tells Whitaker it was he who intruded on the bear and while he doesn't ever want to experience such a close encounter again, he embraces their presence. "I think it's part of what makes Montana wild. If we didn't have grizzly bears… it'd be a little less wild. They're a part of our ecosystem."

Seemed like a reasonable and balanced episode to me

Hmmmm, first time I’ve watched 60 min in years, he didn’t really give his opinion, just showed the story. Wish all the news was that way all the time. I get enough opinions from my in laws

coop22250 said:
Hmmmm, first time I’ve watched 60 min in years, he didn’t really give his opinion, just showed the story. Wish all the news was that way all the time. I get enough opinions from my in laws

Agreed. The story on bears was fine.

I sat through the first two stories, and can’t believe just how blatantly biased the narrative is. *I consider myself middle of the road, too.

coop22250 said:
Hmmmm, first time I’ve watched 60 min in years, he didn’t really give his opinion, just showed the story. Wish all the news was that way all the time. I get enough opinions from my in laws

I told my wife the same thing about the bear episode. They tell you some
Info and let you form your own opinion

Blame football game ran over and took all but the first two mins of the bear part. Dangit.
M

I thought it was pretty well done. Hopefully shed some overdue light on our already large and growing grizzly population. I'm glad they included the clip of the griz running down and savagely killing the red Angus calf. Also glad they included the part about the agency killing a lot of problem bears. Huge success for conservation and the ESA - now it's time for management (without kool-aid) .

It is beyond time for a reasonable, regulated and well thought out grizzly season in MT, ID and WY. The biology is solidly on the side of states taking on full management, including a limited hunting season.

Montana already had in place (decades ago) a very solid hunting season framework- limited quota, stringent reporting requirements, a sub quota for sows and went as far as including all human caused mortalities to be counted against the quota. It would be evaluated each and every year to adjust the quota (or even fully suspend the hunting season) as necessary, based on population data. I cannot think of any scientific reason not to go forward with such a plan. Unfortunately science doesn't always have the final say in such matters
M

Grizzly bear $1 + $25 trophy fee. I found this when cleaning my parents house after they passed away. 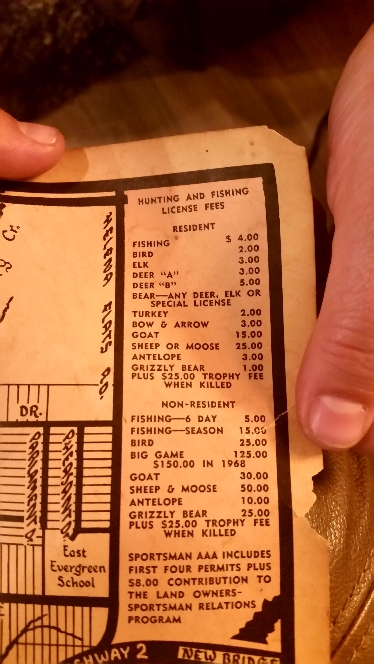 60 minutes is very informative.
You must log in or register to reply here.

Black bears move out when grizzlies move in?

Getting serious about spring black bears