Kifaru is packed up and leaving at 05:00, buddy has a Grizz draw and Ill be looking for a nice Black bear. Have a 3 hr drive before we head north into the mountains. Only have 2 nights/3 days but this is the first trip. Still alot of snow but its a small window before the alders/willows leaf up and create a canopy where its hard to spot them underneath. We'll be snowshoeing in then setting up the shelters and glassing across to the south facing slopes/chutes. likely we are a bit early but its been a long winter and will be good to get out. Will post update in a few days...oh and the weather is calling for showers while were there lol...Man plans...God laughs...

Good luck and be safe !
O

That sounds like an amazing adventure. Showers just adds to your story!
M

Super jealous!! Good luck guys. I hope to see some pics from the trip
OP
B

well we got one and it was an adventure.....if someone sends me their email Ill send a pic if you could post it on this thread please and then Ill follow with the story

Now we need the story! 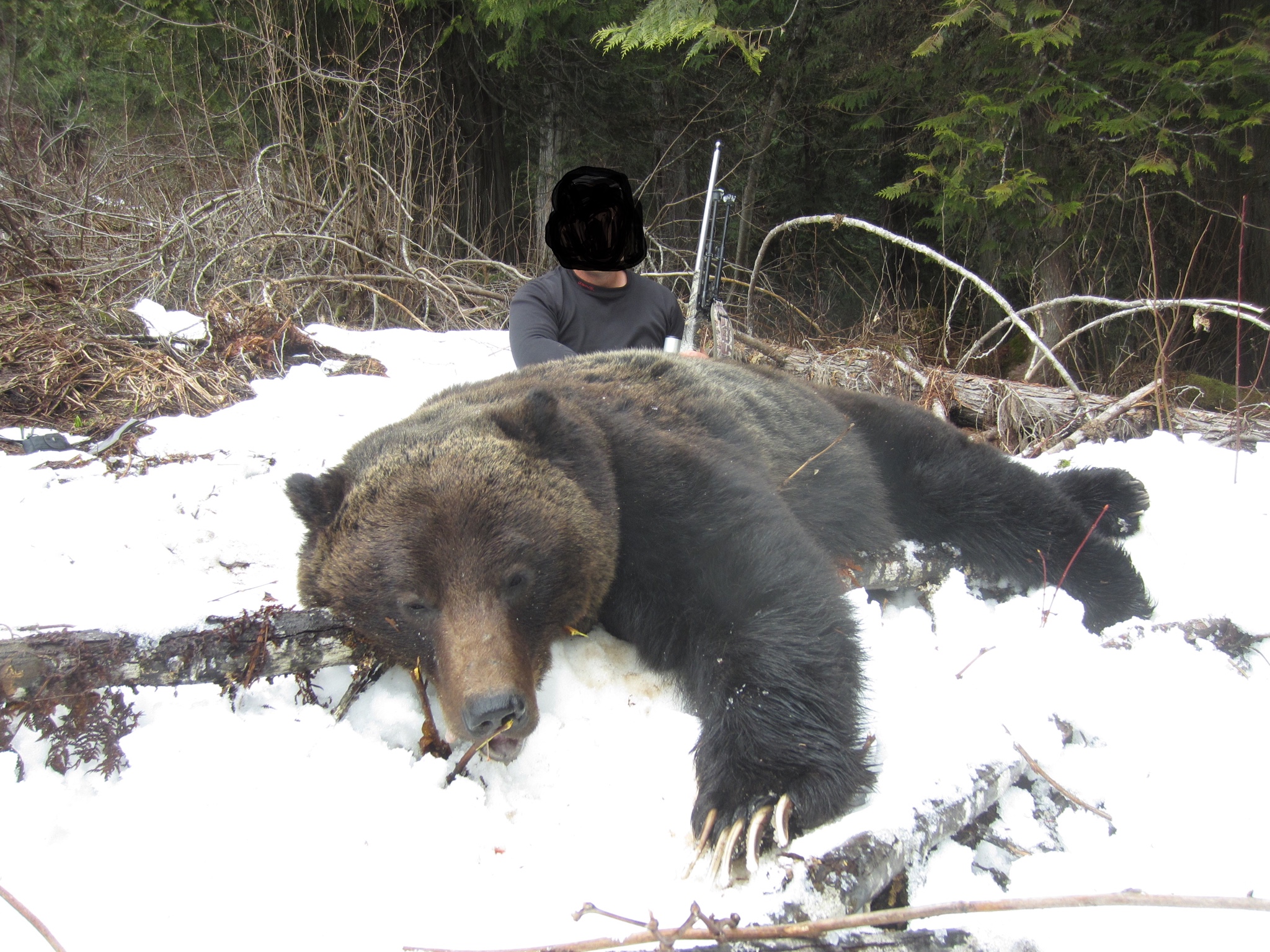 
Sent from my iPhone using Tapatalk
OP
B

well this wont be long winded unfortunately as I am still trying to organize and out away gear..I went along with a buddy who drew a Grizz tag just North of Revelstoke B.C. We spent the better part of Saturday (our first day) driving the valleys and checking snow conditions in the avalanche slides and seeing how much things were greening up. We were spending more time than we wanted in the truck but we were getting a good idea of the country and where we wanted to start. We ended up pitching our shelters beside the truck Saturday night with the idea of heading up a road which had a vehicle restriction at the 9 mile mark, but we would be hiking/snowshoeing in from our tents anyways.
Next morning we had some basics supplies in our packs and headed up the road. We would hit patches of snow where we had to put on the snowshoes and then after a few hundred yards we could take them off and hike on the dry dirt...this got tedious lol..as did constantly pulling our rain gear on and off. After a couple miles we picked up some fresh grizz tracks on the road in the snow. we followed these for a couple hours. Along our way we came across a couple decent black bears feeding on the side hills and a ton of moose sign. We stopped around 8 miles and i was glassing a snow patch further up the road where I could still the bear tracks but they looked like they tapered off into the bush. I was just telling my hunting partner this when he heard a noise to his left, I watched him raise his rifle and then chamber a round, I looked to where he was aiming and could see black fur inside the alders slightly up the slide chute. He fired and I watched the bear go down and let out a death moan. A second shot was fired and we lost sight of the bear as it was in a bit of a depression, we tossed a couple rocks up in its direction but there was no reaction from the bear. When we confirmed the bear was dead I ranged the shot at 39 yards..the bullet struck and broke the vertebrae which anchored him. by the time we gutted and skinned half the bear the sun was behind the mountains and night was falling. We started the 9 mile hike back to the tents with the stars and quarter moon as our light. the following morning we were lucky enough to get the truck up the road with chains on and get to the bear..it was just as we left it. I took a couple hours to finish our work and load up the hide/head and all the meat. All in all we saw just this one Grizz,5 legal black bears,1 young billy goat and 6 moose. For both of us this was our first Grizz hunt..Pretty unreal and intimidating how big they are when you get this close to them. We were lucky with his shot I think as if it was wounded and only 39 yards away things could have gone south pretty quick maybe.

Afterthought: Whenever I come home from deer hunting, my dogs are always sniffing boots/pants as they smell the animal and like it, when I got home last night they wanted nothing to do with the smell and would coward away with their tails down...maybe they know that the smell is above them on the food chain....

Beautiful bear congratulations to you both. Hell of a friend to help out

Sent from my XT1585 using Tapatalk

Really cool chocolate coloring. Nice work!
You must log in or register to reply here.