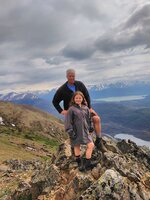 It all begins back in May when my friend Will Walton asks me back in May if I could go along and help Harper and himself on the DS165 Harper Mountain sheep hunt . My immediate answer was yes of course but I have to admit I was kinda worried as Harper is only 10. I was lucky enough to show up in Kenai in June for a training hike with Will and Harper and the hiking part she had down so alot of my worries had subsided. As you all know time creeps by while preparing for a sheep hunt finally the time had come so we headed to Tok Aug 20 for a Aug 21 fly out . The flight out to the strip goes uneventfully and Will even spots a sublegal ram directly above the strip but of course chooses a mountain to the South which will give us access to another boulder strewn valley . We climb most all day and finish with a steep sidehill on loose boulders and rocks to slightly below the peak . We make camp on some lumpy uneven rocks which will prove to be the best spot we will have over the next 8 days . The only complaints were coming from the 2 old guys. HUNT DAY 1- Naturally there is no water at the top and with packs pushing 80lbs the day before we had consumed all the water we could carry so Dad takes off down the mountain 1000 vertical feet away for a water run while Harper and I climb the steep peak to the East , we glass the surrounding peaks for about 3 hours and see nothing so we descend to meet Dad and water up. After hanging in the sun for a couple of hours Will, Harper and I climb back up the steep easterly peak for a late afternoon glassing session I leave Harper and Dad to climb out the ridge so I can view a small lake and I see 18 or so ewes and lambs along with a couple of others hanging out above in the rocks that I believe to be rams. I head back to Harper and Dad to tell them the news only to see them waving their arms and pointing to the valley below at 2 rams 1 of which was clearly legal . Harper spotted them of course because Dad and I were busy looking where rams should be not on the valley floor with the caribou . We were pinned where were at so we had to wait for them to move before we could make our way back to camp so to gather supplies and begin a stalk . We climb around the backside of the mountain we were on and descend 1200+ vertical feet through steep boulders and rocks only to find that they have disappeared . We now begin to climb out of the valley finally arriving at the tents at 10.30 thoroughly whipped . Harpers only complaint to Dad is that she needs her hair brushed as her biggest fear is that she gets dreadlocks .HUNT DAY 2-I get up about 7 am with a sore back from sleeping on rocks and glass out about 3 miles SW of the tents and see a lone white speck . I wake up Will grab his spotter and Bingo a legal ram . We formulate plan as we watch ram feed out of sight eat a hurried breakfast and climb thru more boulders and rocks to a glassing area that might let us find him again . Wow there he is a mere 2.5 miles and only 1 valley away .We cross the valley and climb a small ridge to find the ram bedded on side slope in a bad spot for a stalk but we formulate a plan anyways . Finally everything is coming together as we inch our way towards the ram at about 300 yards Harper informs us that she has to poop okay we let her do what she has to do and begin a slow seat crawl to get her in position . We would like to close within 200 yards as she is only comfortable shooting out that far . I am carrying her rifle with a tripod attached and Dad is 8 ft to the right of us trying to range and spot the ram for us. Unfortunately in the excitement Harper leaves my side and peaks over Dad to see the ram . They both immediately lock eyes and we are busted the ram bolts but stops at 300 yards I quickly set up Harper but I rush her and she clearly misses. We watch for a while and try to figure out a plan to find him again only to see him cross a valley and head out to Texas . Harper is bummed but after a little discussion and a bag of skittles Dad and figure out that it was completely our fault we rushed her and the sheep and we promise not to do it again 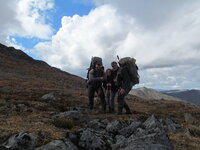 TO BE CONTINUED
OP
C

Bear with not very good at this

So far so good!!!!! Looking forward to the next episode!

Alright you got me, I'm in for the sequel!
C

Can't wait for the next update !

Jeez, c’mon Frosty, aka Chuckles as Harper prefers to call him, you can post the 2nd and third installment in the same thread. I will add a huge thanks to one of the best men I know to jump at the chance to fly across the state and in on his own dime (Wouldn’t even let me cover his commercial flight, let alone the cub ride) to act as a combo of pack mule and motivational speaker through countless miles of rugged loose boulders. You a gem among gems and we love you for it too.

One minor correction, the DS165 was my draw and early solo hunt this year, Harper’s Mt. Harper draw was DS206. With all our draw discussions before and during the year I’m surprised you remembered any of them. Not only was he a crucial part of Team Harper, but he’d stay up a little late each night to journal thoughts and events of the day. Just cannot express enough gratitude at the help Chuckles gave to Harper’s first bid at sheep hunting.
You must log in or register to reply here.

Close Calls in the Sheep Mountains...

W
Harassed by a plane while sheep hunting

Sunday at 10:17 AM
PhotoHunter