I picked up some 180 Hornady ELD-M bullets to try in my 7MM LRM. For those of you not familiar with a 7LRM it's a case designed by Gunwerks of Wyoming. Parent case is a 375 Ruger necked down to .284 with a 30 degree shoulder. Great design but falls short because of poor brass IMO. It really has the potential to be the perfect 7mm if a solid brass mnfg would pick it up. Unfortunately it's horribly inconsistent brass from Hornady. Setting that asside my rifle is a Remington action trued up with a 26" proof sendero light barrel 1-9 twist, AG Composite Carbon fiber stock topped with a Leupold VX-6 4-24x52mm (for sale). Gun weighs in right at 8.5lbs scoped and is capable of 1/4 moa.

I hunted exclusively with the Berger 180 Hybrid last fall and between me and my two friends we harvested 2 antelope, 3 mule deer, 1 elk and 1 bear. Shortest shot was my bear at 270 yards and furthest was mule deer buck at 610 yards. The Bergers performed flawlessly resulting in all one shot kills. My bear was the exception. It was a one shot kill but I shot him after he winded me and took off. Unfortunately it was far back and I didn't recover him until the next morning. He went about 400 yards into a thicket. Based on the rain on him he was dead within about 2-4 hours. Still a one shot kill but absolutely no blood trail.

I noticed the accuracy with the Bergers was really hit-or-miss. One day it was exceptional and the next it was horrible. I now account for most of the accuracy problems to inconsistent brass thickness, neck tension and runout. I've since rectified most of the issues with the Bergers taking great care to Precision reload utilizing strict brass sorting, neck turning, bump sizing and correcting runout. SO I decided to try the Hornady 180 ELDM just for fun. Here what I found:

For comparison it worth noting my gun runs the Berger 180 Hybrids right at about 3020 fps. So that will be my comparison.

Here is a pic of a group shot at 212 yards with the Bergers once the load was developed: 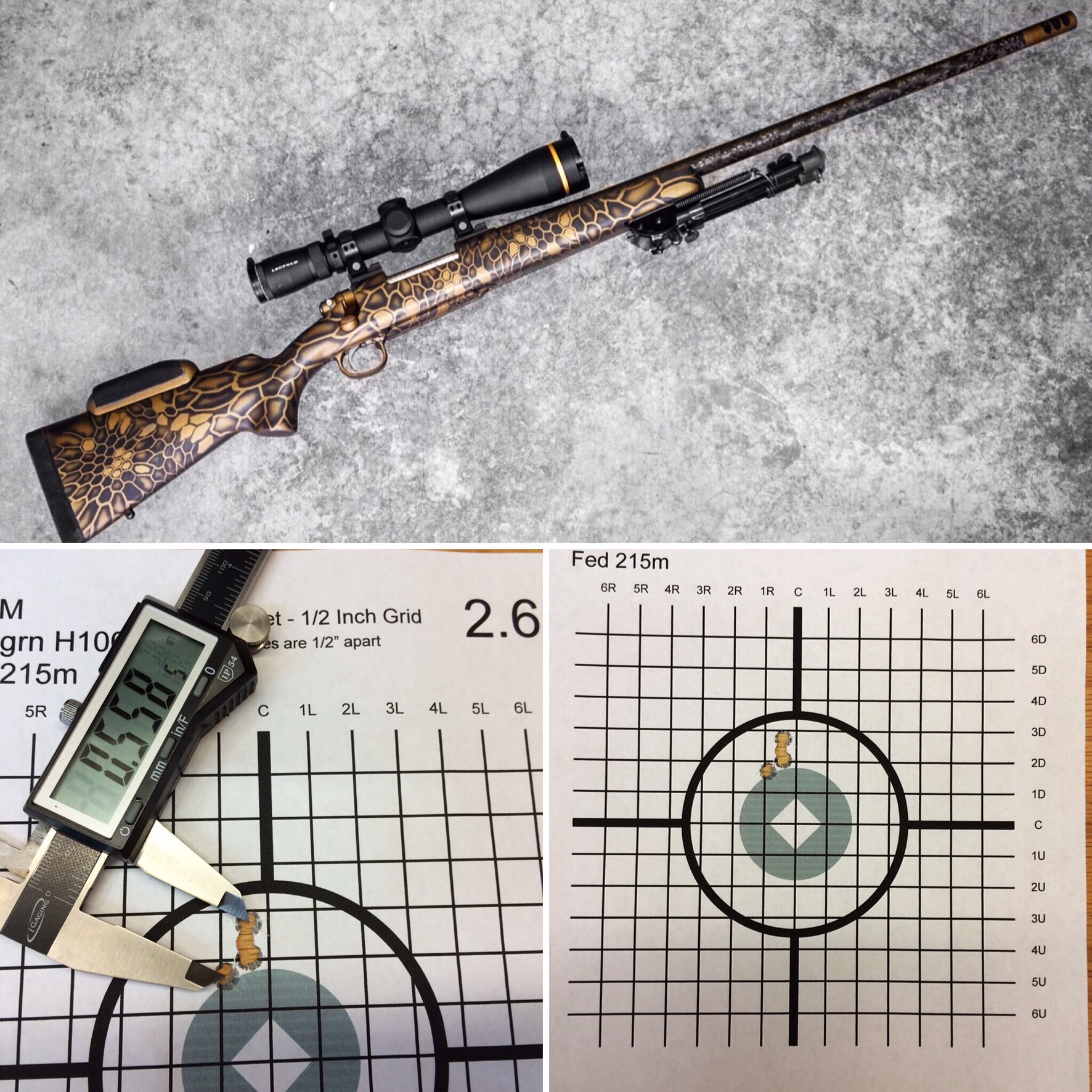 Unfortunately this was about as good as it got and I had a hard time repeating these results. I was able to shoot several more 1/2 moa groups with this combination but I felt something was wrong. I did everything imaginable chasing that accuracy. After getting correct neck tension and runout the majority of my problems disappeared.

So I started up loading the 180 ELDM's. Being the bullets are exact same weight I started cautiously at the same charge of 70.5 grns of H1000. The results were pretty darn good. Below is two separate groups shot on the same day in 16-18mph winds: 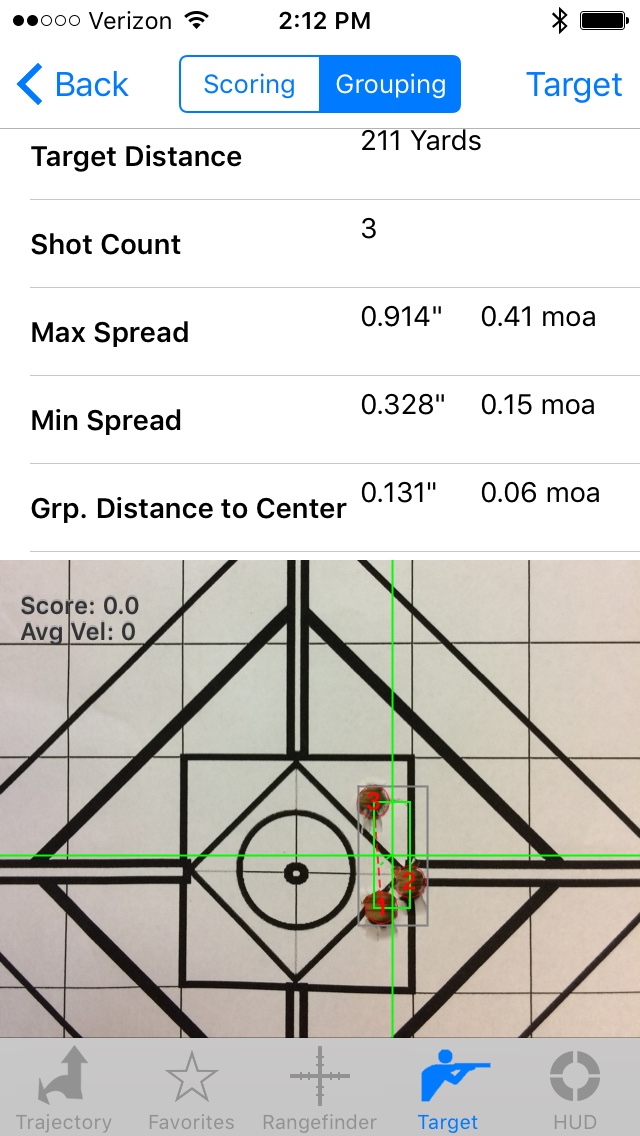 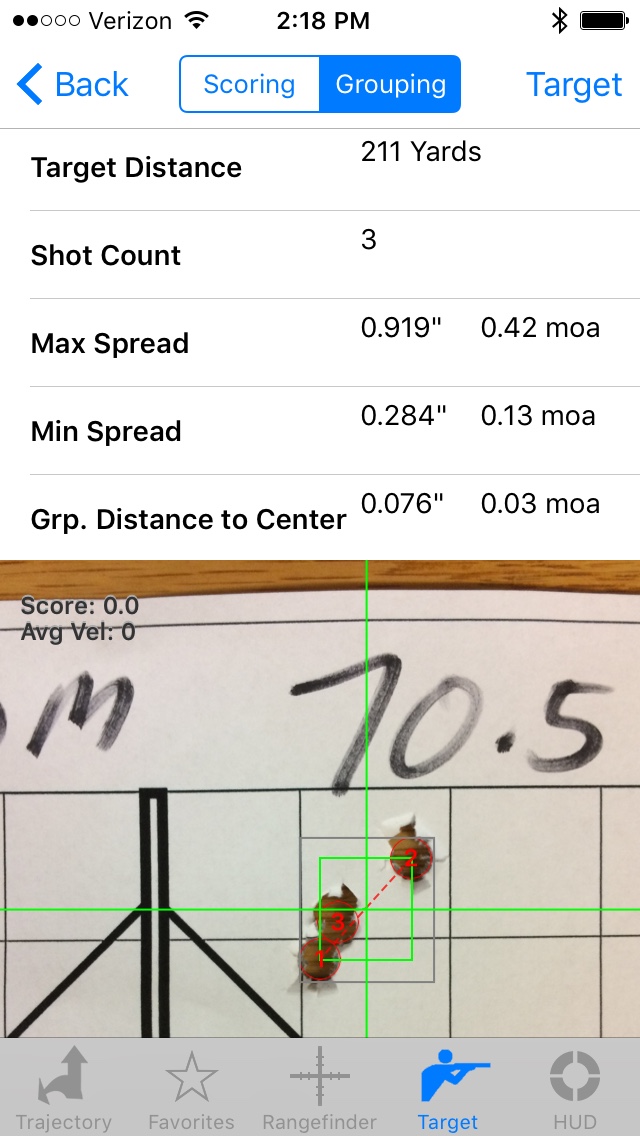 Borrowing a buddies Lab Radar the rounds average velocity using the exact
same components was 3066fps. I also shot several groups with the Berger 180 Hybrids. I didn't save any images of the groups but they averaged just under 1 moa. It's worth noting that I'm at about 800 rounds down my barrel and I suspect I'm starting to chase the lands. I bet if I were to experiment with the seating depth I could get back to 1/2 moa with the Bergers now that I have the brass issues resolved.

Given that I've got quite a few rounds down my barrel and the fact that I'm definitely at the top of my pressure with a hot load of 70.5 grns H1000, I decided to try to find the next lowest node. At 70.5 I get slight stiff bolt lift, flat primers and the occasional smiley face. 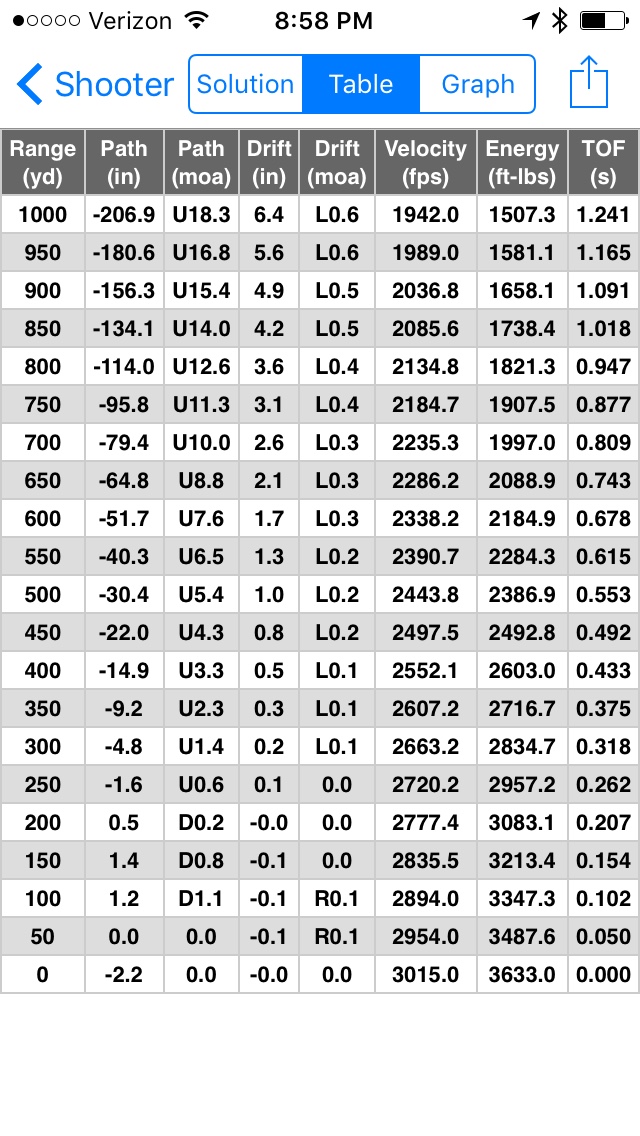 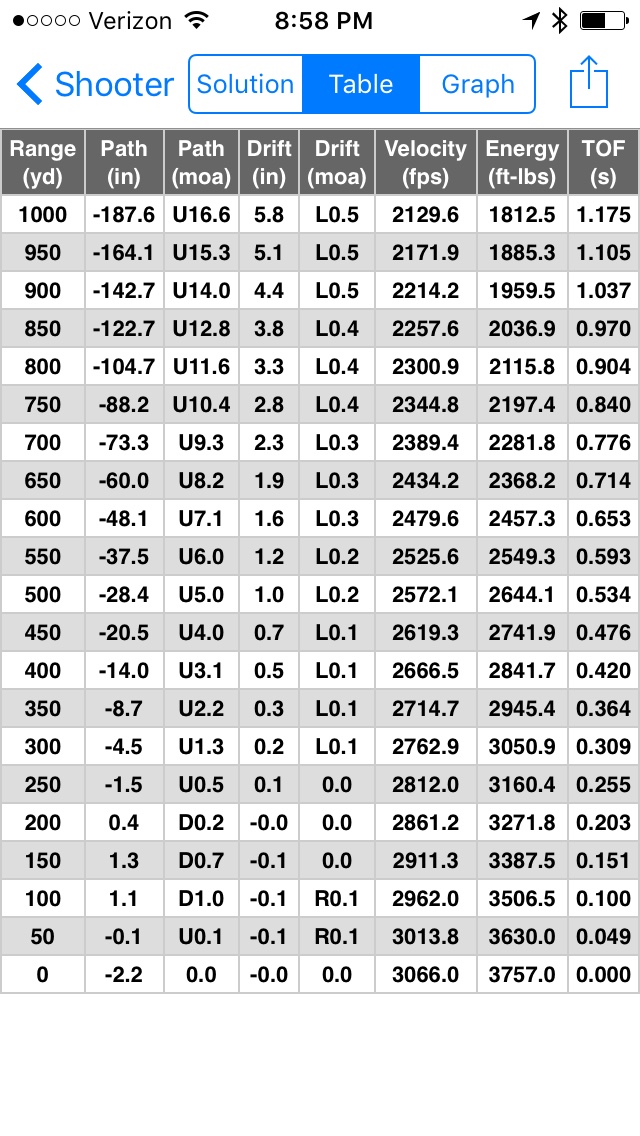 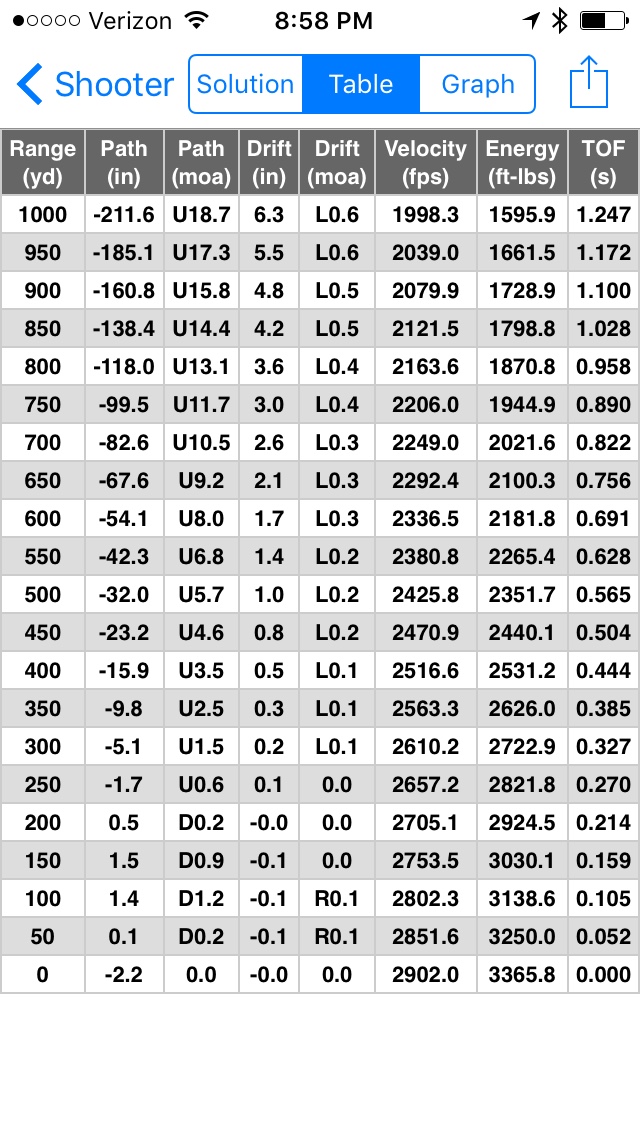 The 180 ELDM with the exact same load of 70.5 grns is 46 fps faster than the Bergers and almost 2 moa flatter at 1,000 yards without sacrificing accuracy.

The ELDM in my rifle has proven to be a pretty slippery bullet that challenges the Berger Hybrid in both accuracy and velocity. I suspect I could get some accuracy back from the Bergers by adjusting the seating depth but It sure isn't worth it to run them that hot.

The unknown factor for me is the bullet performance on game. Because it's such a new bullet there really aren't any reviews that I've come across with the 180 ELBDM and performance on game. There certainly are a lot of mixed reviews on the ELDX and ELDM bullets in other calibers but it's really yet to be determined with the 180 ELDM. I'm certainly going to give it a try next season and I will have some 175 grain Sierra game king bullets or 180 Hybrids as backup.

It should be noted, I tried loads with the 175 ELDX and 180 Berger VLD bullets. Neither of these bullets performed well in my rifle and the best groups were right around 1MOA.

I hope this review has provided some insightful information for those of you seeking to shoot this bullet.

Please if you have any experience with this bullet either on paper or on game share it for future hunters/ reloaded to use!!

Here is a video shooting the Berger Hybrids at 715 yards with 14mph cross wind. First shot was a miss as I under estimated the wind. Followed up by two shots back to back.

Notice the dust drift from the first shot as a wind indicator!!

Great review. Thanks for posting all that.

Thanks for the review. Awesome rifle by the way, killer rig at 8.5 pounds all up. Seriously considering building a 7mag very similar to yours.
OP

Fireguy said:
Thanks for the review. Awesome rifle by the way, killer rig at 8.5 pounds all up. Seriously considering building a 7mag very similar to yours.
Click to expand...

Thank you!!! I'm very pleased with the weight and accuracy. The next barrel will be chambered in 7mm Practical

Here's what Kiwi Nate had to say about the new 180 ELDM: (Nathan Foster world famous gunsmith from Terminal Ballistics Research)

"By now, many of you will be aware of Hornady’s new 7mm 180gr ELD-M. It’s the A-MAX that many of us waited several years for. Lately I have been using this bullet in the 7mm Rem Mag and 7mm Practical. Please take note that this bullet can develop higher pressures than the Berger VLD. You’ll get the velocities but you need to drop powder charges when starting out. If you are switching from a 160-162 grain bullet to the 180 grain, go down at least 6 grains, not simply 2 grains (based on 1 grain per 10 grains bullet as is common in the manuals and proves safe when using start loads). Start way down low, then come up. You may find that the sweet spot is 4.5 grains lower than where it was when you were using a 162 grain pill.

It is also important to understand that being such a long bullet, the tip (rather than the ogive) may contact the button of the seating stem within your seating die. If the button touches the bullet tip rather than the ogive, it will play merry hell with concentricity during seating and you will see fliers downrange. If you have such issues that need to be remedied, the options are to contact your die maker and ask for a stem suitable for match style bullets or failing this, you may need to have your existing stem altered (drilled) by a gunsmith.

The 180 grain ELD-M is a hard hitting pill. All I can say about its performance is wow. That should be enough for most of you. It meets and exceeds all of my expectations as predicted in the Cartridges book second edition which was released just before this bullet became publicly available. It does however need a good deal of magazine space, boasting max OAL’s of around 88.3mm (3.476”) in the Rem Mag (and therefore .280 Rem and AI) and up to 93mm when using the Manson Reamer Practical (3.661”), leaving around 1mm or 40 thou for smooth feeding (and a wee bit of room for throat wear) when using the M700 and factory box magazine (non-detachable). I can tell you that it took a good deal of back and forth to ensure that the Manson fixed throat reamer would suit the new ELD-M prior to actually being able to handle and measure the new pills. Fortunately, we nailed the throat design. The ELD-M has to my way of thinking optimized the Practical. A gentle stroke of the trigger results in a horrendous thump followed by two sets of hooves pointing straight up in the air. It doesn’t get any better than this.

I suggest that you do not chase every ounce of velocity with this pill. If velocities are down by 50fps from where you hoped they would be, then leave well enough alone. If your Rem Mag yields 2800fps, so be it. If your Practical yields 3000fps, so be it. This bullet will still deliver the goods and boy oh boy does it cheat the wind, putting a lot of other combos to shame. Dave Emary and his team at Hornady really have made an outstanding bullet.

As for the G1 BC, I suggest trying the following (as per Hornady’s basic predictions):

You will need to tweak these to suit your individual rifle and twist rate but so far, these BC’s appear to be close to Hornady’s predictions and as a basic guide to the 9.25 (factory rifles) and 9 twist magnums. Those who wish to shoot to extreme ranges will want to drop another .3 at 1500fps. If you do not have a ballistics calculator that allows for multiple BC’s, I would suggest setting the G1 BC to .750 (the 8 twist rifles average out at a BC of around .810). This will put you slightly high when shooting at around 600 to 700 yards but it is better to strike high than to have a potential and ever increasing low POI error. Do keep in mind that there is no substitute for actual down range field testing of the individual rifle. Also keep in mind that at very long ranges, small errors in turret calibration become much more exaggerated. It is very important that you take this on board and not be too quick to blame all ills on the BC."

As an interesting side note;
When I first loaded up the ELDM I found that I was getting the occasional flyer as noted by Nathan above. I went back and found that I was getting quite a bit of runout and when corrected the flyers disappeared. I now wonder if I was experiencing the issue Nathan mentioned above whereas the bullet tip was contacting the seating stem rather than the ogive. I'm currently on vacation away from my reloading bench but will be sure to report back when I get a chance to check. I'm currently running Hornady Custom Match Bushing dies with their micrometer.

I'd love to be able to shoot this 180 ELD-M bullet from a short action, anyone think that's possible? 7-300 wsm maybe?
B

I'm curious if anyone else has had any results with this bullet on game. I have loaded this in my 28 Nosler and it shoots lights out, so far have pushed it 1200 on steel, but am curious as to when it hits bone or other parts on an animal. Thanks guys!
You must log in or register to reply here.

Sold Looking for 7mm 175 ELDX, have Barnes, Hammer, and Bergers for trade