How do you travel (drive) with your gear?

We never leave our vehicle unattended. 3 big coolers on a hitch hauler along with a giant Yakima when in the 4runner, and under a tarp with the F250. We pack stuff to unload the valuable stuff first when we will stay in a motel where we can park right outside the door, never stay in hotels unless absolutely necessary.

Prefer to have everything we need when we pull out of our driveway so we can just go straight to where we hunt. Water makes things a little heavy but it's not a huge deal.

Personally, I would do anything I could to avoid bringing a trailer.
B

My 2012 Ram 1500 with a custom dog trailer, has a truck cap that is the raised kind, do at least two trips a year, drive either alone or with another driver or two. For big game the freezer is under the cap and generator is on the front of the dog trailer only if we are away from my camp/lodge for long periods of time or on the way home. have done this method going on 20 years now. only stops are food, gas and dog breaks. We also carry a high end cooler that has our food and any drinks that need to be kept cool. most of these trips out or back are between 24-30 hrs so pretty easy to do. all high end gear is kept in the truck never under cap, dogs are good about making noise if someone gets close to trailer, they are completely harmless but make sufficient noise to keep people away. I did have to put locks on their crates doors a few years ago to keep the PETA/ other do gooders at bay who always want to release dogs.

in case you dont know, dry ice is usually easy to find. so a nice hunk of it will freeze everything in the freezer. that way you can leave the genny behind.
F

I have made a habit of putting a padlock on one of the safety chains and locking it to the hitch. This makes it a little more difficult to remove the trailer from the truck. I put the key to the lock on the key chain w the truck keys. If I have to leave the truck and trailer out of sight for more than a few minutes I will try to back up to a light pole, tree of fence. Anything to make thieves work a little harder to take my stuff.

I'm not too sure about that today. Lots and lots of dry ice being used to ship Pfizer vaccine, I have relatives that ranch in Western South Dakota and had to use liquid nitrogen when they freeze branded their heifers in January . Normal conditions yes dry ice is not hard to find.
wmd
OP

mlgc20 said:
Personally, I would do anything I could to avoid bringing a trailer.
Click to expand...

I agree. I know I can get all the gear in the truck on the way out. My worry is say we get 2 or 3 bulls down, the horns and meat take up a-lot of room. I am thinking ditch the trailer and run a hitch cargo carrier with a large cooler or a freezer. Then coming home the meat would go in the bed and other items would go on the cargo carrier. Horns can always be strapped onto the bed cover.

And yes as many of you said it will be drove straight through. That is not a concern of mine. I drove straight through from Wyoming to PA by myself. The truck never shut off except for gas and restroom stops. My wife was not very happy with me, but there was only a week left in PA archery season and i had to get back into the woods. 2 Days later I filled my PA buck tag.

No freezer needed. Takes up way too much space. A half decent cooler with dry ice and duct tape around the seam of the lid with sleeping bags on top works great.

As far as elk antlers go... I tuck mine away. Displaying them to the world is asking for trouble. Out of sight out of mind. Show them off when you get home.
R

I have taken a flat bed trailer several trips with atvs. I have room to add coolers and other items on the trailer in addition to truck bed. No problems yet.

If there's 3 of you why are you stopping at a hotel? Take turns driving and go straight through. Forget the trailer and tonneau cover, a tonneau will just cost you room, stack it up in the bed. Trailers suck to move around in the mountains.
L

Our set up,
Have been running a custom built open trailer with a pindle hitch originally built to roll behind my 1988 Landcruiser. The trailer has independent suspension with no worries of high centering. The frame & body 80% are aluminum, as is the tailgate and folding ATV ramp. I can maneuver it by hand in the yard. The wheels are Toyota 6 lug, by design the wheelbase is identical to the that of my Landcruiser. It tacks/handles great with a load but bounces badly if empty. The trailer also performed double duty hauling an ATV to Local WMA's during deer seasons.

Due to a limited availability of parts and the rough highway ride of the "88" LC that I still own, I'm been towing (1st a 05 Nisan Titan) with a 2011 Tacoma 4X4 long bed. My fuel economy drops off pulling the trailer from 19 MPG to 16-17 MPG. I have since sold my Yamaha Grizzly, and a Kaw. 750 Brute Force I won as a door prize in a casino! Had an opportunity to trade the new Kawasaki in towards a side-by-side. The deal fell thru as I figured out the Razor 900 wouldn't fit on my trailer. Have been hauling from South Louisiana mostly to New Mexico, Colorado, and once to Wyoming. My hunting buddy and I are uncomfortable with straight thru driving, and we get a motel each way on these 1200-1500 mile jaunts. Always a risk, have not had any issues with theft, but are particular where we park for the night. We both tote any weapons, daypacks, goose down bags, and optics into the room when we sleep. There are times when I wish I had a covered trailer. If I had it to do over I would go with a standard ball hitch over the pindle hitch.
LaGriz
H

I say trailer. Bring what you need. I do a trip to NY (from AZ) to hunt. 2500 mi one way. I do it in 2.5 days, each way. Two 1000 mi days and a part. Two nights in hotels. Guns come into hotel room with me. I try to park my trailer with the ramp up against something hard (tree, wall, rock, fire hydrant). I have a spare tire mount on the side, so I try to park the opposite side up against something hard (corner of a parking lot covers back and side, if parked right). If someone wants to steal my quad, they're gonna work for it. I can usually find a spot that I can see (hear?) from my room. I figure I would hear someone working to steal my rig.

Only advice for open trailering is to duct tape the lids of your coolers/hard-sided-totes to keep rain from being driven into them during harsh weather.

Here is a pic from this past fall's trip... 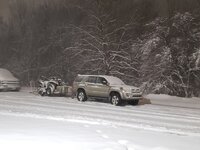 On this stay, I could not find a corner spot, so I backed kinda close to the Chevy van behind me. Note my coolers on the front. I leave them there over night, ratchet-strapped down. I also leave my climbing stand strapped to my quad. Hardly anyone knows what it is anyways.

I agree with previous guidance: trailer locked to hitch...hitch locked to truck.

For over a decade of doing these trips, I have not had anything go missing. [Knocks on wood.]

I'm always trying to avoid a trailer and keep things as simple as possible with less chance for things to break down. We've only gone with 2 or 3 people and I could see needing a trailer with more than 3. We traveled 1100+ and 1400+miles to NM(twice-once souting) and CO the last two years.

When we took the truck we had 2 people. We had a receiver hitch cargo basket and a rooftop cargo carrier mounted on 2x4's.
With the Expedition, we had 3 people. We put the cargo carrier on the rooftop and also had the receiver hitch basket. We left enough room that one person could fully stretch out and lay in the back to sleep. Had we filled both tags we had, we would have needed to buy another 120/150qt ice chest and it would of fit inside where we had been sleeping. Antlers would have been a challenge, but I'm sure we could have got them on, between the cargo hitch and rooftop.

The cargo carrier has been useful from elk hunting to our weekend trips to the deer camp. Here's a picture of how it's mounted, the coolers not on top in this pic. With standard 2x4 it still supports a loaded 150qt. ice chest, although they're starting to sag a little.

Got this installed tonight to try out on a beach trip coming up in 2 weeks. Easily able to throw coolers, bins, toats, horns, etc in this rack to leave room under the cover for the other items! Pretty excited about this set up!! I'll never do tonneau cover again after having a topper. Just lock up and keep valuables in the room with you, shouldn't have anymore trouble Than if you were at home. This year I'll be pulling a utility trailer and a ATV

70qt and a 100qt cooler; pack and bow in the front seat next to me, boots in the floor. Food divvied up in the back for grab and go; Pad, my home pillow, and heavier sleeping bag for luxury camping if I decide to sleep in the rig, with some spare sets of clothes. I don't get guys that roll with a full truck bed piled high with totes, but that's just me.
You must log in or register to reply here.