How to Archery Hunt Silent Elk?

I've been bow hunting elk (resident CO OTC) for 4 years now. My brother and I get into elk at least once a season but struggle to be in a position to make a move (usually unexpected close encounters in heavy brush). CO is one of the worst places when it comes to archery elk pressure and so calling seems to be way out of their behavior patterns by then. We've only heard bugles 1 out of the last 4 years.

How do you all like to bow hunt silent pressured elk when the terrain isn't conducive to spot and stalk?

need to find new areas. Not everywhere is pressured. If elk are not talking it makes it hard and this is where scouting pays off. Ambush between bedding and feeding or active water or wallows
F

Same way I hunt turkeys that don’t gobble. Find a place w some fresh sign. Start off with some soft calling, watch the thermals. And give it some time, nothing happens move on.

Soft, cold calling is your friend. Moving 200-300yds and repeating.
B

Fullfan said:
Same way I hunt turkeys that don’t gobble. Find a place w some fresh sign. Start off with some soft calling, watch the thermals. And give it some time, nothing happens move on.
Click to expand...

You're paying attention to thermals for the turkeys? LOL...just kidding Good advice.

There are always bulls that will come in silent, regardless whether there are other bulls bugling. I'm always on the move, so I tend to ignore those bulls. But if you have any patience at all, you can get into those silent bulls every day.

Just as others have stated above. Get near where you think there’s elk(couple hundred yards). Do cow and calf calls, kick rocks, step on and break sticks. Try to sound like a small group of elk milling around. Pause for a minute or so repeat. If nothing happens after a 2-3 calling sequences I start adding tree raking and quiet young bull bugles. Pause then repeat. If I really really feel there’s elk nearby I’ll do this for up to 45 minutes. Otherwise 20-30 minutes. Then move to next suspected bedding area.

Most of the time the bulls seem to sneak in within 10 minutes if they were within a couple hundred yards to begin with. If you not really sure where the elk are at probably just call 30 minutes at each spot.

Last season we had really warm temperatures day and night the first three weeks of archery where I’m at. It seems like really warm night time temps and day time temps make the bulls really reluctant to move much at all except at dark.

I got my elk in dense foliage/ deadfall and in a heavily hunted OTC unit in CO this year also... just made soft calls and moved really slow, don't underestimate the usefulness of your bino's in that dense forest, it really lets you look past stuff and you can pick out ears and tines standing out a ways off in the foliage. Scouting was the big key here, it was a heavily used rutting area year after year looking at the sign and when i got there in hunting season there was fresh sign so i figured they must be in there somewhere

cnelk said:
I killed these 2 elk within 20 mins - all I did was give a few soft mews
Click to expand...

Blind cold calling can definitely bring in silent elk. Paul aka Elknut1 has been talking about this for years. I’ve targeted likely bedding areas when cold calling. As bad as I perceived my hunt to be last year in a CO OTC heavily pressured unit, I did call 2 bulls in silent by cold calling. The only issue was I didn’t hear or see them come in and they snuck in behind me. I didn’t even know they were there until I heard them take off and then it was too late.

5MilesBack said:
Did you hit an artery on that cow........looks like about 2" of penetration.
Click to expand...

You of all people should know that arrows work their way out after being shot.

The shot was quartering away. Sunk to fletching
But I really dont know why I have to explain myself to you

I usually hunt pressured, silent elk. You need to know where the feeding and bedding areas are and be able to ambush them in between. In addition know where they go when pressured and be in those areas before day hunters or other hunters who are trying to still hunt them, bump them.

I'd rather not ha, but I live in the unit and this way I can hunt most evenings and every weekend without taking time off work.

Plus, if you get good at killing silent pressured elk, you can kill about any elk.

dlee56 said:
I'd rather not ha, but I live in the unit and this way I can hunt most evenings and every weekend without taking time off work.

Plus, if you get good at killing silent pressured elk, you can kill about any elk.
Click to expand...

I hear you, but thinking outside the box a bit, somewhere in that unit there has to be elk that aren't pressured, and are talking. Keeping it close to home, and the fact you live in CO, it shouldn't be hard to find with some work.

My motto is if it's mid to late September, the elk are talking, we're just not in the right spot if my deaf ass can't hear them. Could be a ridge over, could be three, but they're going off some place. They can't help themselves.
OP

Coveyleader said:
I hear you, but thinking outside the box a bit, somewhere in that unit there has to be elk that aren't pressured, and are talking. Keeping it close to home, and the fact you live in CO, it shouldn't be hard to find with some work.

My motto is if it's mid to late September, the elk are talking, we're just not in the right spot if my deaf ass can't hear them. Could be a ridge over, could be three, but they're going off some place. They can't help themselves.
Click to expand...

That's true, its probably time for a more thorough search of the whole unit.

How much do you buy into "never leave elk to find elk"? We are in elk, but primarily cows and calves.

All elk talk eventually, personally I don't mess with bulls that don't talk much and I find areas where they are more vocal. Currently, in OR I can move unit to unit with a general tag, and a lot of times we will drive an hour or more to find vocal elk.

Find a hot cow and I don't care how pressured an area is the bulls will bugle, they might run away doing it but they will bugle just the same. We successfully hunt some of the most pressured units in OR and get into bugling elk almost every single day.

This last season on the last day we went to a know spot where there are always elk, there are also always people. The tactic is to drive this drainage and call, once you get an answer you go after those elk. It's a well known tactic in a well-known area, this was my sons first-year archery and it was a last resort after many blown opportunities. We played the game and got a bugle, we started working the bull and then heard some hunters cow calling from above, we decided to walk down to the skid road in the bottom of the draw and hope the bull winded the people and pushed down to us since whoever was dropping in from above first thing in the morning had no idea about thermals. After a few minutes we had two more guys walk up from below us, I happened to know one of them so we chatted for a second and I headed to the truck. We drove around the corner and let out another bugle and heard a bull make a low bugle from just down the ridge from where the guys dropped in above us. I drove around to the upper road and marked a saddle where I thought we could access the bull, as we were getting out of the truck there was a guy that pulled in and jumped out with a chainsaw to start cutting firewood. We started working our way down the ridge and the guy got his saw started and started to drop a tree. After walking a few hundred yards from the road and waiting for the saw to stop we proceeded to let out some quiet bugles each being answered by a really quiet lazy bugle. We would sneak while the saw was going and stop after the saw stopped and call. We finally got to a small rim rock on an old road cut and figured the bull was under it, we figured we would sneak to the edge and find a small rag horn, to our surprise when we got to the edge a 300 class 6x6 and 3 cows stood up staring back at us the bull walked out to 50 yards and my son drew his bow. He then looked at me and asked if he could shoot because I told him I didn't want him shooting anything past 40 yards. I told him to go ahead and take the shot but to make sure to execute a good shot, the bull started to walk off and he slowly let down. He said it was his best experience of 2020 getting to draw back on a big bull.

Anyway, my point of the long-drawn-out story is that elk are elk and will tolerate people way more than we think and if there is a hot cow in the area they will bugle. Some areas hold elk all of the time, this particular spot has elk in it every single day for 80% of the year until the snow gets too deep. It gets hammered by people every day too, all summer long, camping, firewood cutting, mushrooming, huckleberry picking, and hunting. It is still a great spot to go and we always get into elk there, I cannot tell you how many bulls I've called in there. I've split a bull from his cows there one time with my pickup, my boys and I jumped out and I let them start bugling at him, he sat there screaming at us and my rig while my wife tried sneaking in for a shot, his cows finally snuck around us and they split but there was no way he was leaving them.

I would be curious to what your currently doing? Maybe it is just cows and calves and no bull but not likely. If your seeing elk be more aggressive and move in on them. Elk bugle the most before daylight and the last few minutes before dark. They mostly bugle the most during these times because that is when they are moving from one spot to another. 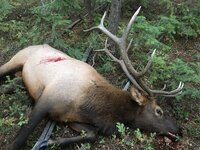 cnelk said:
You of all people should know that arrows work their way out after being shot.

The shot was quartering away. Sunk to fletching
But I really dont know why I have to explain myself to you
Click to expand...

That was an odd response. You shouldn't feel "obligated" to explain it if it bothers you that much. I've just never seen an arrow sticking out like that when I walked up to an animal.
You must log in or register to reply here.