Impressive Start to the 2021 Shed Season

Nice! Gets me fired up to get out there and find some!

Thats a sweet find and a good looking dog. How old is the pup? I've got a german shepherd / choc lab mix that is about a year old. Has a couple months of shed training under her belt. Gonna hit the woods with her pretty soon here.
OP

Randall said:
Thats a sweet find and a good looking dog. How old is the pup? I've got a german shepherd / choc lab mix that is about a year old. Has a couple months of shed training under her belt. Gonna hit the woods with her pretty soon here.
Click to expand...

He’s almost 5mo and I’ve had him out 4 times so far. I’m surprised how well he’s catching on, he’s already found the dead head and 3 antlers. Shepherd/Lab mix, sounds like sees going to be a heck of a shed hunter. You’ll have to fill me in on how she does when you get her out. 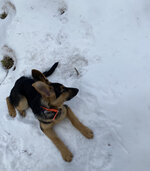 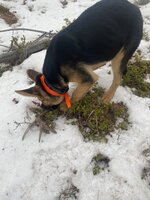 What an awesome find! Congrats!
M

Michnal243 said:
This past Saturday I decided to get my new shed dog out along with my other two pups and try to find some fresh drops on public land. I went to a 3yr old select cut with a nice mountain stream that intersected it which was lined with old growth timber (providing a great bedding zone). I worked my way through the cut with intentions to focus on the bedding zone. Shortly before I approached the bedding zone I came across what most would recognize as big buck sign. Multiple freakishly large buck rubs heading in a straight line to the bedding cover. With all the sign I decided to grid this zone in hopes of finding the antler of the buck making these rubs. 15mins after I began gridding, my new shed dog “Brew” darted out in front of me to a big tree with overhanging limbs. I watched as he shuffled backwards out from under the tree dragging the most palmated whitetail I’ve ever seen! I’ve only been shed hunting a few years and I’ve found a couple deadheads but never one of this caliber. After snapping a few much needed field photos I scanned the area for sign of predator tracks. I cut two wolf tracks which lead me to the rest of the buck’s carcass. I’m assuming he was a victim to the wolves but will never truly know. With 2020 being such a crap shoot it’s nice to start the 2021 Shed Season with this gnarly mountain buck.
Click to expand...

Wow awesome find!!!
You must log in or register to reply here.