Long story short I was offered some wild hog meat today. I went and picked it up and my buddy was holding off the meat as he was taking it off ice out of a cooler. The cooler was half full of water and blood. It's been in the mid 40s here in Iowa. He shot the hog in Texas last Friday and seeing how he handles it here I can't imagine it was treated any better in Texas. Actually I saw a piece of bullet fall out of the shoulder when he was rinsing it off.

Is this meat safe to eat? It doesn't smell yet but shit, my spidey senses are going crazy and the last thing I need is to give one of my kids food poisoning.

Sent from my LGLS992 using Tapatalk

Pig is not something I would really take a chance on, you clearly have doubts, and that would be enough for me to walk away.

So its been on ice in a cooler for 3-4 days right? Thats my sop for most of my meat.
D

Agreed. It's not what I like to do, but tons of folks soak their meat in ice water for several days because they think it results in a milder taste.
OP
K

My concerns are soaking in blood and water for that many days, plus none of the shot up meat was removed. Leading me to believe that what I would consider a decent level of meat care was not met. Clean water exposure isn't a deal breaker, bloody water, and hair and shot up meat all in the water is a different kettle of fish entirely. If it was just me, I would keep it. Thanks for your opinions guys.

Sent from my LGLS992 using Tapatalk
B

The blod likely came from the meat; as such, there are no issues with that, as long as the meat was kept rifridgerator temps. The shot up portions, also are not an issue; again, as long as it all was kept cold the entire time, and put on ice within a few hours of harvest, nothing there will be introducing bad bacteria. Granted, I don't like to put shot up meat on ice. But then I do all my own butchering, so it comes natural to me, most people obviously do not. It's pretty difficult to keep every hair out of the meat, without having the proper facilities (a place to hang, butcher, and wash). But excessive hair in the meat is not a good idea, but also not at all likely to spoil the meat. Dirt on the other hand, well there can be all kinds of bad stuff in dirt. However, dirt can normally be trimmed off. But I cwetianly wouldn't want my meat sitting on slush with dirt in it, as it could potentially penetrate the meat.

With that said, I am meticolous with the animals I harvest, from field dressing to de-boning, all the way through butchering, packaging and freezing, to the plate. But if you were to examine the comericial process, it is not uncommon for pork to take up to 2 weeks to go from butchering to purchase, all the while only being referidgerated. The largest pork processing plant in the nation is in Nebraska, and they butcher and then ship across the nation, which can take some time, but it's still sold as a fresh, never frozed product.

Dog food in my books.

I've chanced some suss meat and regretted it.

It's tough cleaning hogs in the field and keeping all the hair and dirt off of the meat. I take mine to a processor and trust them on checking out the quality of meat.

Any meat is safe if you cook it enough. Well, unless it looks like this. This is what 4 days in a Mississippi summer does to a 55 pound feral swine carcass... 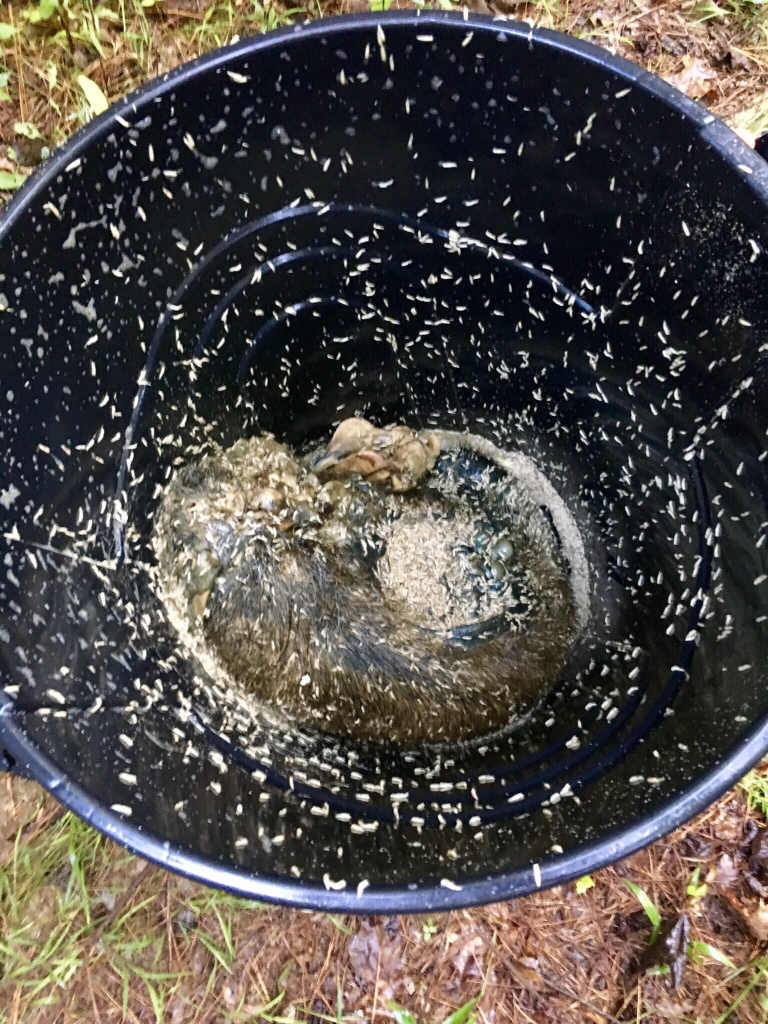 my spidey senses are going crazy and the last thing I need is to give one of my kids food poisoning.
Click to expand...

Listen to your senses! The meat may very well be ok to eat, but when it comes to your family's health, why take the chance?

Perfectly fine in my opinion. I wet age my pigs a week to 10 days. Everyone gets all worried about dirt and hair. That stuff washes off. It's a non issue besides that it makes processing more of a pain. I routinely cook pigs that are "too big to eat" for guest. They assume they are eating store bought pork until I show them pics. Wet aging is where it is at for game meat in my books.

oldgrowth said:
Listen to your senses! The meat may very well be ok to eat, but when it comes to your family's health, why take the chance?
Click to expand...

Even if the meat is safe to eat, just having that nagging question in the back of your mind will not let you enjoy your meal.

If it was put on ice within a few hours it is absolutely fine. I'm not a huge advocate for it, but everybody in Texas soaks their meat in ice water/slush for a week or more.

If he got guts on the meat and didn't clean it off and let is sit above 40F it could have spoiled. If it is not smelly or slimy, Its GTG.
O

It is the temperature that matters, not whether it was stored in water. 40 degrees is the magic number. For food to be safe it should be stored below 40 degrees, because it inhibits dangerous bateria growth. Anyone who says, "any meat is safe if you you cook it enough" is giving you bad advice that could kill you or your loved ones. That isn't remotely true.

If you have any reason to think it was stored at temperatures above 40 degrees, don't eat it.

P.S. Sorry, wasn't looking to post such a heavy first post on these forums. Hi everyone... and whatnot..
You must log in or register to reply here.

S
Are my backstraps toast?