Just picked up a Remington TAC-14 for bear defense

Seriously though, I did just order one. Might have it on some trips as a camp gun. Hadn't heard anything about these new "firearms that shoot shotgun shells" on here that I've seen so feel free to chime in with rational comments if you dare.

Anyway, I'm pretty sure that this will be better than any big caliber revolver or 10mm auto for bear protection...discuss...

Bet it has a hell of a kick thats for sure. Would be fun. Id much rather have my Remington 870 with some meat on the end to stuff it into my shoulder =)

Yeah. I was just watching that. Made me buy one actually. Well, the video didn't but Remington has a $50 rebate good through tomorrow so I ordered one off of Bud's.

To be honest, I don't know where I'd ever use one of these but I think it's fun and I wanted to snag one before it became classified and cost me a whole lot more to get one. Realistically though, I might, maybe, possibly see myself having this in a camp at some point for "tent defense" or whacking stupid grouse/ptarmigan.

Yeah it would be a great camp gun. no doubt. I take my 870 with a tactical stock on it with us all the time for camp defense. We get some real crazy folks and sometimes bears we have to throw a round off into the ground on. Mine has extended mag tube and 18 inch barrel. This would be a crap ton of fun to shoot though.

I love watching Hikock gun reviews. He's a great guy and very entertaining. He's like a kid with his guns. =)
OP

I honestly didn't know these things were out but the video opened my eyes. The Mossberg to me looks a little better but I've been shooting Remingtons since I was barely tall enough to walk milo stubble for pheasant and the Remington safety and layout is second nature. It's a bit pricey at $339 after rebate for a "toy" but it might be a toy that goes a way quickly and I can actually see a purpose as I'll build a bug out bag(s) around it and my 10/22 takedown.

Anyway, stop disrupting my chaos with your logical discussions. Let's now discuss how this is so much better than a Redhawk .44 for brown bears on Kodaik...
Last edited: Oct 15, 2017
W

Was having this type discussion the other day on another site. To me, it looks like one of these shorties and a Kifaru gun bearer would be the ticket for carrying a gun in bear country. I don't know because I don't live in Grizzly country. but, wold this be practical? It isn't going to out weigh any handgun that one would logically choose for that purpose. Plus, carrying it in the gun bearer would do ore for relieving the weight factor versus a 5.5 pound revolver just on your pack belt. I won't address the 10mm debate. Its a joke to me to even consider it an option among the choices one has.


So, what do you all think? I know it isn't easy to carry the extra weight and bulk. But, neither is getting mauled. God Bless
H

I handled one down at the local hook and bullet. I found it awkward, really awkward. I couldn't find a firing grip that I liked other than from the hip.

For point-plank bear defense it's quite likely as good as any revolver made for the purpose. Of course, point blank bear defense means a lot of things have went south anyway and "ideal" has long since passed by you're down to shooting stuff in the face at spitting distances.

I keep thinking about buying one just because, but I also think I'd consider it more of a domestic concern for repelling boarders than something to carry in the woods. That thing looks made for "low recoil" buckshot.
B

Not as good as the Doc Holliday...but I suppose it will suffice.....

Can I even still discuss it as a Ca resident? grin
We are restricted from purchase as its under the 26.6" total length reg.

IMO, Its the most effective backup weapon for many circumstances...the 2 big questions are;

How easy is it to wield quickly?
How easy to pack around?

The quick part is all about practice.....its do-able

The packing part is tricky. I didn't like any of the sling arrangements- shoulder or front sling- I used on my old cut down Mossberg.
M

Interesting video, I am presuming those were lighter loads and not what a guy would actually use for bear defense.
C

This is my bear defense. Lives under my right arm stuffed with brenneke slugs when I'm bowhunting in grizz country. Blackhawk stock, oversized safety, ghost ring sights, 12" barrel (which doesn't help you guys south of the border). 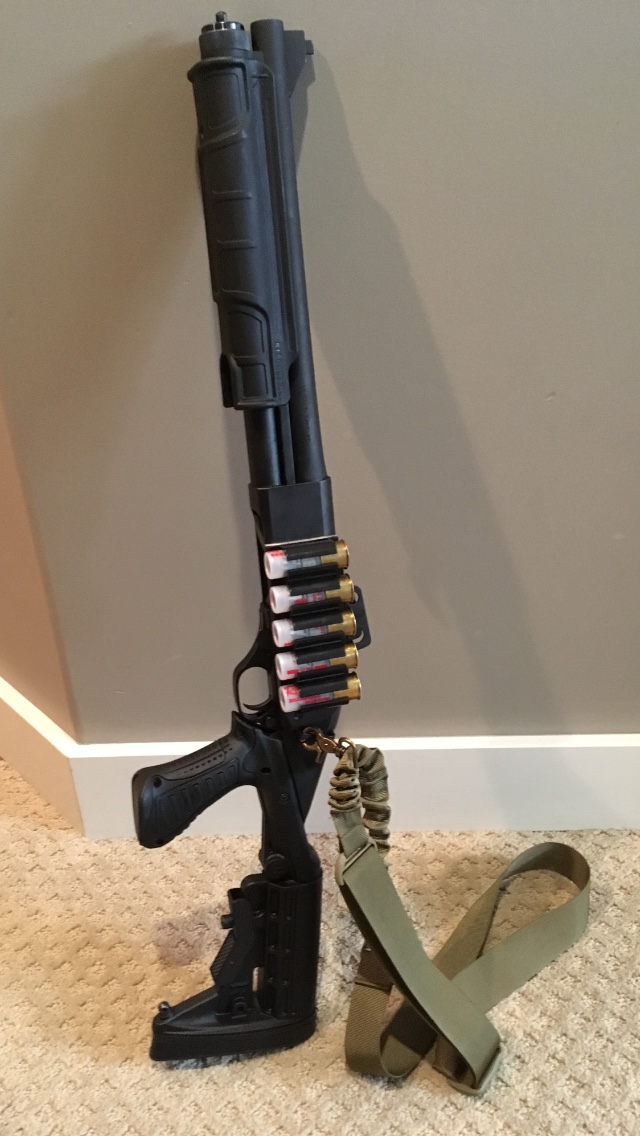 I used to carry the guide gun with 450 hard cast but now I just pack the shotty. I wouldn't want anything without a stock to put into my shoulder, pistol grip shotguns are easy to pack but hard to shoot. 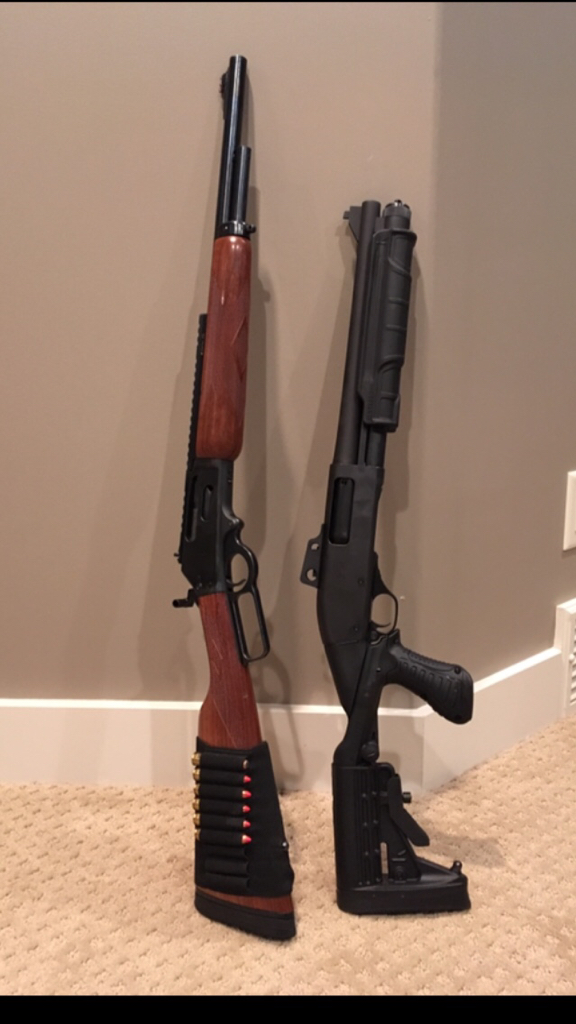 For those that are fans of pepper spray instead of bullets coiloil37 said:
This is my bear defense. Lives under my right arm stuffed with brenneke slugs when I'm bowhunting in grizz country. Blackhawk stock, oversized safety, ghost ring sights, 12" barrel (which doesn't help you guys south of the border).

I used to carry the guide gun with 450 hard cast but now I just pack the shotty. I wouldn't want anything without a stock to put into my shoulder, pistol grip shotguns are easy to pack but hard to shoot.

So did you have to get a nfa stamp?
C

I'm in Canada. We can buy shotguns with an 8.5" barrel and they're unrestricted. Yet a handgun is restricted...
I bought the 12" barrel because I wanted the extra round in the mag and 8.5" seemed a bit short.
B

colonel00 said:
For those that are fans of pepper spray instead of bullets

Are those really any more effective than Granny Clampets rock salt ? [ Beverly Hillbillies reference lost on the young guys]

^^Probably illegal in Ca...heck the rock salt is probably illegal here. I suppose a guy in Ca. could make up a shell loaded with some pepper powder high on the Scoville chart but why stop there? Add a little salt and garlic powder...saves a step in the marinating process.

Many many years ago my then employer was forced to make us field engineers take a bear/gun safety class. YES! free ammo and range time! I ended up sitting in with a bunch of gold miners from UT that were up to do exploration work for a big operation. Since they were focused on rocks their gun set up was a bunch of pistol gripped short barreled pumps, kept out of the weather in custom cordura scabbards lashed to their work packs. A mess of very nice weapons. But then at the range they proved to be useless.

In the classroom the instructor proved to the miners that scabbards would get them killed. He made them wear them and "charged" from 20 feet across the room. The miners were mauled before they could even get the weapon out of the scabbard after dropping the pack. Also made it clear they needed to keep the pack on to protect their necks during a mauling.

At the range the instructor asked me with my 870 deer slayer to go to the end of the line and wait until all the miners had a chance to shoot their pistol gripped weapons with 3" slugs in a timed drill. 12 guys, two shots each, only one slug onto the paper but missed the bear image. No shooter was able to get their second shot off within 6 seconds after the first round hammered their wrist. One guy dropped the gun after the first shot.

Watching all that I was a bit nervous to step up and take my turn with a weapon I had never used before that morning. Pump shotguns for years, rifled sites since birth, but a timed drill? Using a tactical ready weapon laying on a table and 12 guys watching me? I was pretty nervous. The timer beeped, I picked up the weapon, shucked it to chamber a round, and put two rounds into the bear images head. One in the forehead and one in the nose. 1.5 seconds.

Looking at the TAC-14 it is a pointless weapon to have in the woods. The rear stock would be easier on your hand than a traditional pistol grip, but you can't effectively aim the weapon. You will point it in the general direction of what ever is coming towards you and hope that your round is close enough.

You should watch the video I posted above. Its manageable with the Right Ammo. He was pretty surgical with it =)

You should watch the video I posted above. Its manageable with the Right Ammo. He was pretty surgical with it =)
Click to expand...

I can't until much later tonight...IT rules and what not...
B