It is a lot of fun. I love making my own stuff. I end up buying the best eventually. Traded into a knife from a dude that was on that Forged in Steel show.

I forged these. The only pics I have on this phone. 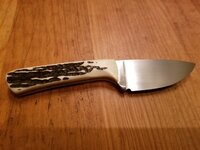 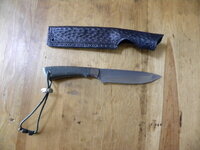 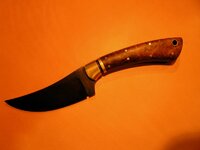 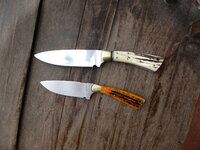 I was in a similar position a couple of years back. I started with a bench grinder with a modification that allowed it to take a 2x48" belt. I made several knifes off this, but just recently bought a professionally made 2x48 belt grinder. It has the advantages of more power, variable speed, and the mount has the ability to tip it on its side which adds functionality.

When it comes to steel, I prefer stainless to carbon steals. But carbon steels are generally recommended to beginners as they are more tolerant of home heat treat. I did some research and found there is a guy local to me that professionally heat treats knifes from all around Australia. Once I outsourced my HT to him, it opened up a lot more options in steel I could choose.

Most of my knifes have been made from Sandvic 12C27 which has worked really well for me. Its pretty readily available, economic to buy, is pretty easy to grind, holds a great edge and I dont find it hard to put an edge on it.

The three knifes in the below photos are all made from 12C27. These are the first 3 knifes I made and were all made with my crappy old starter grinder set up (orange handled one was first, walnut handled second and green handled third): 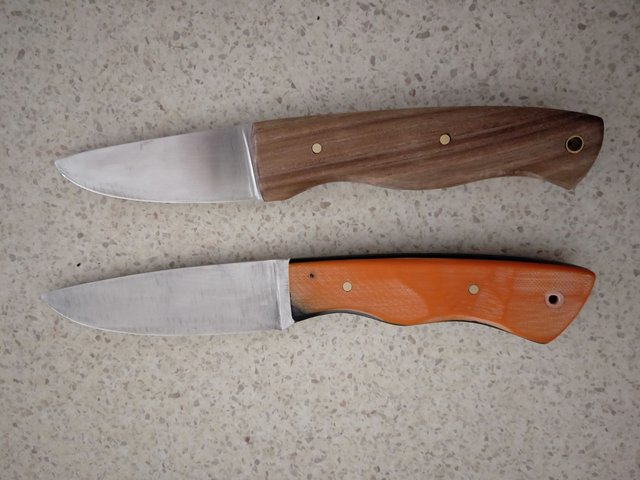 I tried putting an edge on this one differently to the first two, Totally buggered it up, so went back to how I have always done it. I still need to clean up the marks in the blade, but it cuts great, so haven't gotten around to cleaning that off yet. 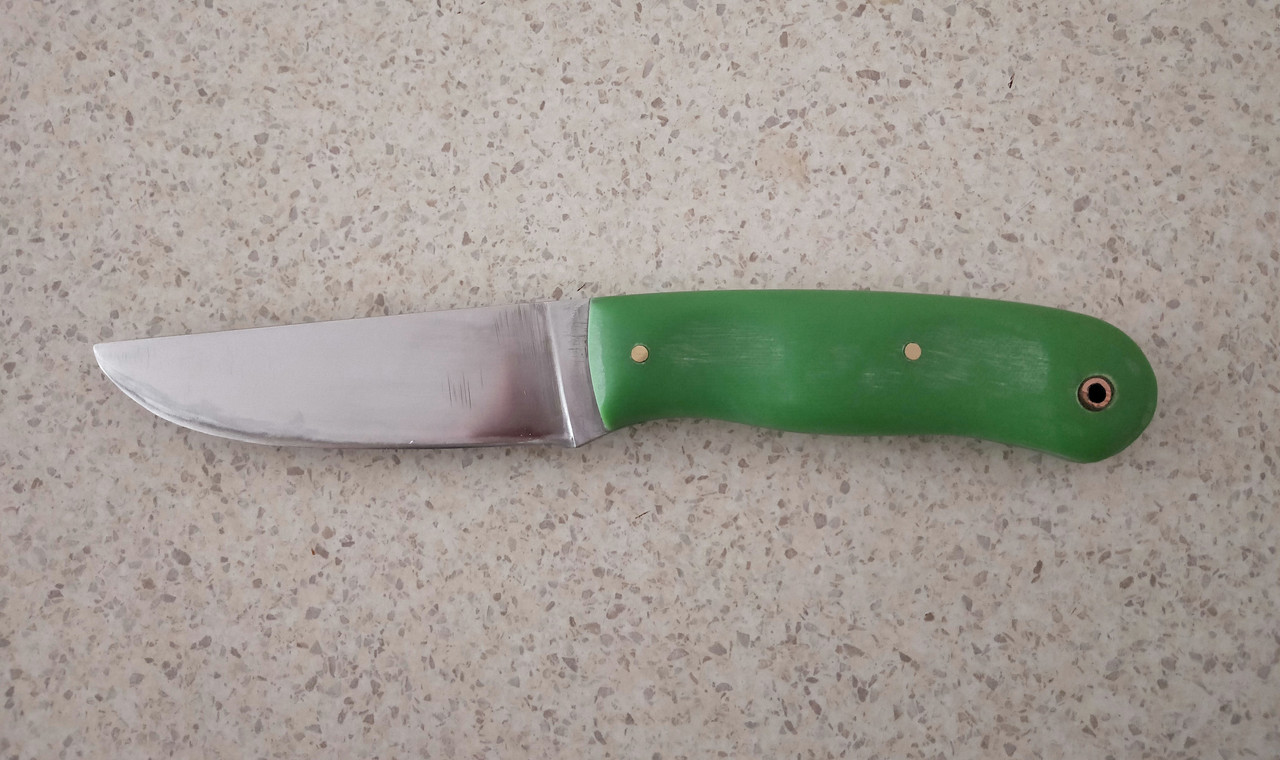 I did some kydex work to make some sheaths that will let me carry them in my day pack, also happy with the results of that:

I gave my first knife to a friend who has butchered a few Sambar deer with it. These deer are bigger than a mule, but smaller than elk. He has been able to breakdown several without resharpening the knife, so pretty stoked with the performance so far. 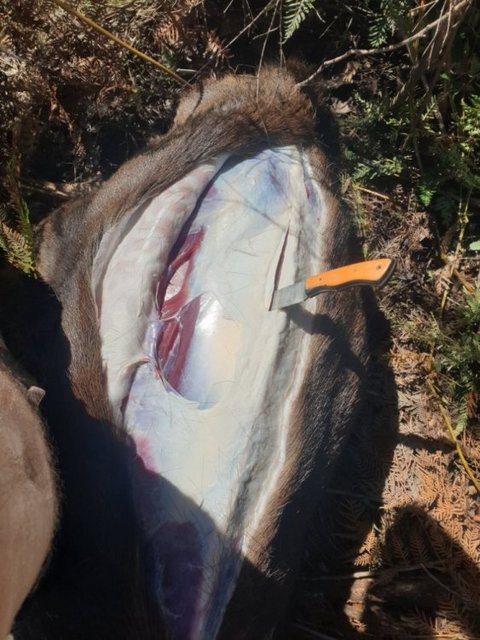 manitou1 said:
I forged these. The only pics I have on this phone.
View attachment 399448
Click to expand...

I am in love with this one. I got my next project
S

I’ve made several knives from old saw blades, files and rasps. I think my favorite thing to use was farrier rasps. If I remember right they are 1085 steel. A lot of the times just ask a farrier and they will give you there used ones. They are wider than most files and you can get a decent size blade from one. I would recommend getting this book. He covers it all pretty good. I made my first knife just from the info in this book. Couple pics of farrier rasps knives I made back in the day. 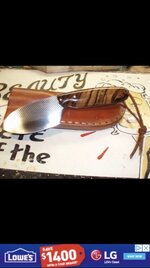 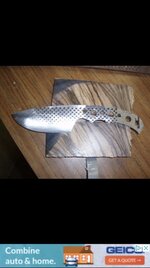 Thought I would post a project that I am just in the process of finishing. This knife has a few firsts for me - steel is S35VN, black micarta handles with red G10 liners and red G10 pins. First time working with most of these materials, first time making this blade shape, and I sharpened it on the belt grinder instead of water stones or using the Worksharp. Edge is not quite as good as I can get it with the other methods, but its about 80%-90% of the way there. As usual, I learned a lot, made some new mistakes, plus I made a couple of cockups I already know about.

Well, pretty much finished now. Another couple of firsts. Made a pair of knifes as a set for the first time. And made a "zipper" style gutting knife. Will be giving them to a friend who shoots a lot of deer to try out. 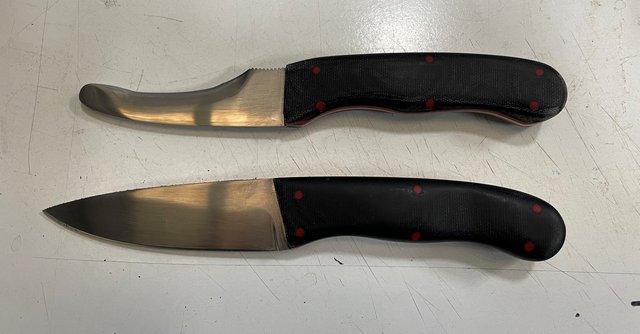 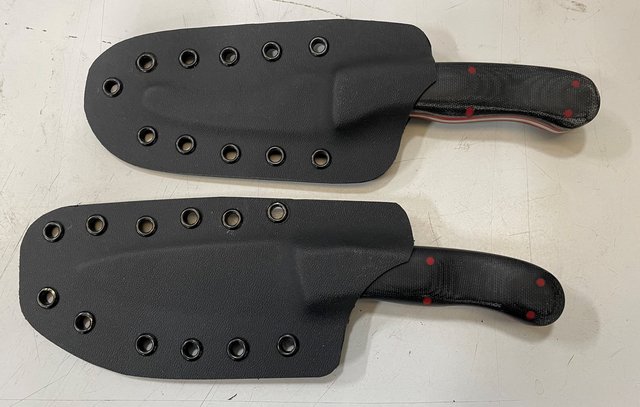 Having been an assistant for a knife maker when I was a teenager, I would get started with pre-made blades. We used Italian steel at varying grades depending on the use of the knife. This will get you started in the process and have a few great knives to grow from. It can be overwhelming to try and learn forging, shaping, sharpening, leatherwork and handle working all at the same time. 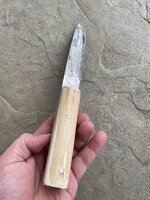