DISCLAIMER! Sorry for the length of this for such a short event!

Yesterday, Thursday 3-14-19, I was able to get to the Dinger Farm and more importantly, I was able to back the truck into our normal shooting area!!! We have such an accumulation of snow here, the area has been unavailable for a month. Fortunately, for me, Tom did push a path into the area with a snow plow a few days ago.

I was headed to the farm for two missions. I recently acquired another stainless Knight Original DISC in 45 cal. with a Fast 1-20 bore. I made all the conversions to switch it to a Lehigh Bolt and Bare Primer ignition. I removed the original DISC stock and put a Thumbhole DISC stock on it. And I think that is going to be short lived! The rifle shot so well I am planning on taking the TH stock off and put the rifle in a very light weight Knight Kevlar Stock. Pulled the trigger off the barreled action and soaked and cleaned it. Re-lubed it and adjusted it to 0 creep and a 3lb. trigger pull. Mounted Warne scope bases on the receiver and dropped a Bushnell 3x9x40 Elite scope with a Ballistic Reticule. Bore sighted the rifle with a laser bore sight and pronounced it ready to shoot! I loaded up 16 tubes of 120 grain by volume of BH-209 and said I was ready to shoot. Best of all! Thursday proved to be a beautiful day!

Next! - headed to the work bench to get the new Lehigh bullets ready for shooting. By that I mean I wanted to resize them from .458 to .454 which I believed would easy the amount of pressure I needed to push the bullet through the crown of the rifle. These bullets are built specifically for a .458 - 45-70 barrel. A key for trying these bullets they are designed to tighter tolerances than most ML bullets in that need to fit real rifle bore. The 45-70 rifle barrel has deeper grooves than does a 45 cal. ML and as most of you know the ML barrel can actually be different bore sizes, and where from .449 to .454. In this case the new bullet can actually cover that wide range of bores. The OD of the bullet is right at .4495 and with that it will fit MOST of the 45 ML barrels on the market. The Drive Barbs on the bullet can be resized to what ever works best for your bore.

This particular rifle seems to have a .452'ish land to land diameter. Getting the .458 bullet through the crown can be done but it takes a couple really good whacks on a short starter to get it done. Because of that I decided to resize the Drive Barbs to .454. Another forum member suggested he might use a .457 die for his rifle. And of course if you have one of those really tight 45's you could resize them to .451 or .452. So in a way these bullets almost become a 'universal of generic' 45 bullet.

My goal yesterday afternoon was to sight in the rifle was a simple mission get into and out of the shooting area without getting STUCK! Shoot the rifle for the first time and get it basically sighted in... Simple enough!

I did get in and got set the bench set up. Of course the legs on the bench penetrated and the hard upper layer of the snow and sank 4-5" into the snow. And then one important thing I failed to think of was, while Tom plowed a bit of access to the cultivated field - he did not plow a path out into the field. But... he or someone in the family had been riding a snowmobile. I set the bench so that I could walk out into the field to set the target by walking on the track trail in the snow hoping it would support me. For the most part it did, but when it didn't I would dropped through almost to a knee. But I really want to shoot!
Took four very patient shots on the target, making scope adjustments with each shot. After the 4th shot made on final adjustment to get the elevation I needed. Then on to the fun stuff shooting the 4 birds that I had taken out with me. For shots - 4 broken birds.

From there I looked around the barren snow field and looked for a target of opportunity. I found a spot near the top of a ridge that a single piece of tilled dirt was visible. I really thought it was about 175 yard up to the dirt. Loaded up and took the shot! I missed - the bullet with just a bit to high. Broke out the range finder... according to it the range was 147 yards! Loaded up again set the cross hair right on the base of the dirt took the shot! Good shot!

After the shooting I had done with this new bullet I was really more impressed with the bullet than I thought I would be. It, the bullet, resized to .454 went through the crown with one good pop on the short starter and push down the bore very well. Some might think it went down to easy! But I was confident it would not come of the powder in the normal hunting routine. Also, I was REALLY confident, that the drive barbs had enough grip on the land to get stabilization. The real key is will the powder cup on the bottom of the bullet seal the gas behind the bullet - it does and it did!

Still had some tubes of powder left and was really excited about shooting - so I decided to try to walk the snow cat track again. Only this time out to 100 yards and place 4 clay birds... This is where the bullet really proved itself to me.... First shot at the far left bird clipped the top of the bird. I made a slight sight-in adjustment on the second bird - punched the center of the bird out - leaving a donut standing there. The next two shots on birds - the same results...

I really do like this new bullet! And I already know the Terminal Performance is awesome!!!

I only took a few pictures so he is assort of a recap. 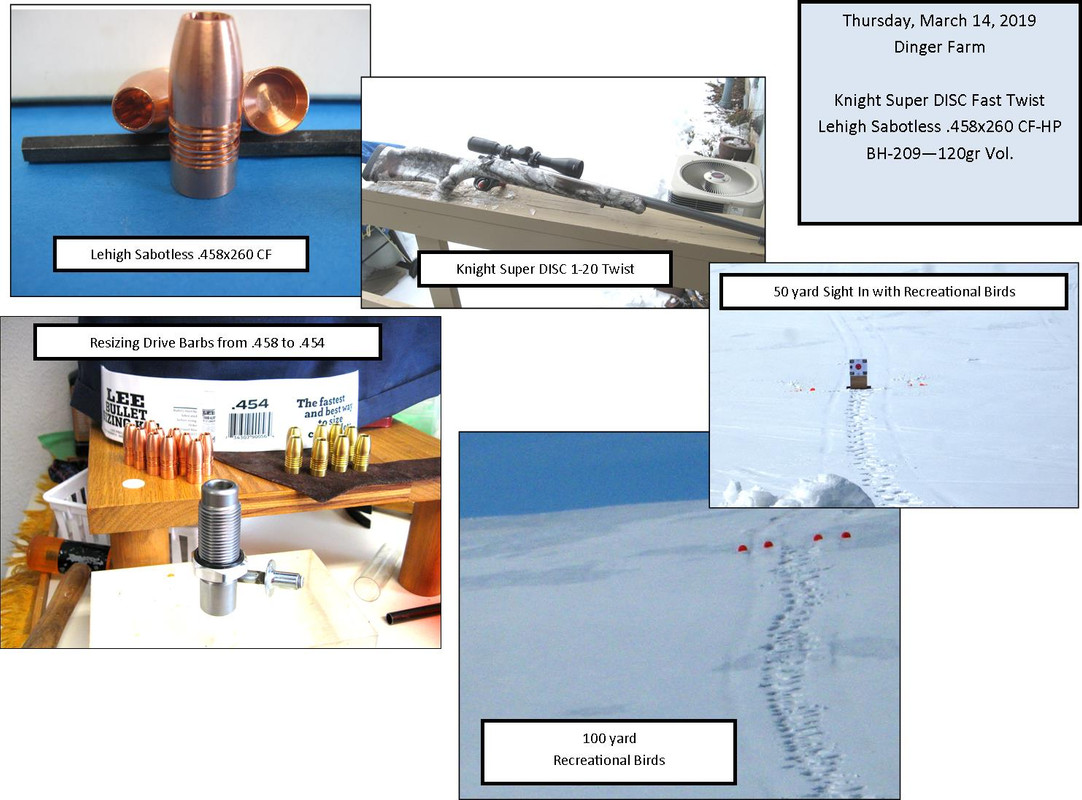 Thanks for the range report!
M

Great report! Do you think a muzzleloader with a 1:30 twist would stabilize these?
OP

Macegl said:
Great report! Do you think a muzzleloader with a 1:30 twist would stabilize these?
Click to expand...

Thanks for the info, replied to your pm.
S

Do they make those bullets in .54 cal ? And I take it they are not sabo s so would be all right in Colorado ?
OP

Stalker69 said:
Do they make those bullets in .54 cal ? And I take it they are not sabo s so would be all right in Colorado ?
Click to expand...