We just got back from our first, but hopefully not last, trip to Alaska. It was three years in the making, and I'm very grateful to my wife who insisted I make it. I explored a lot of options, but at the end of the day, the only teacher friendly trip I could pull off was Sitka Blacktail over Thanksgiving break -- we get a week. Simply put, we had a great time. Eight deer for five hunters, and that was with me having to sit out a day (don't fall on logs) and another hunter who only hunted two days due to some physical issues, but we still got several nice bucks.

As far as accommodations and service go, I give full marks to the Petersons at Kodiak Combos. First I need to give full credit to Lianna. Besides being a great contact person who was very helpful in setting up the trip, she was there every morning and every evening making fantastic meals. I GAINED weight on this trip after spending the day tackling some of the toughest country I've seen (normally I'm doing Colorado high country.)

On the hunting side, Jeff emphasized safety and since my 19 year old son was along, I really appreciated that. There are lots of ways to get messed up on Kodiak, but the Zodiac to beach in twelve degree weather ranks pretty high. He had it down, and made sure we made the boat to beach trip safe. Notably, the safest places to land all had deer. Once on shore, I highly recommend not slipping on ice and using your ribs on a log as an arrest on the first day. Good news is the ribs aren't fractured, just bruised. Most of the pain, none of the danger. It did slow me down.

We saw a huge variety of wildlife including a pod of humpback whales hanging out in the harbor outside the windows of our lodgings. In fact, that was the launch to our trip. "Here you go, pick a room, check out the whales." If you go duck hunting, watch out for eagles in the background. Never saw so many. Our entire bear sightings came to one. I was bummed that I didn't get to observe it, much to my disappointment, but it was about two hundred yards from my son and friends as they boned out a deer. Happily it was upwind, and no drama was required. Sea otters, seals, emperor geese, a wide variety of ducks, and one curious ermine replete in winter attire rounded out the trip... and deer.

We saw many deer from day one to day five. The first day had almost no bucks, but many deer. The second was a bonanza with three mature bucks taken between five of us. We had a batting order, and the guy doing clean up got his buck on the third day. The last day was make or break and some of us were at the "fill the freezer" point as far as what we'd shoot. That day resulted in a nice buck and two does between four of us. Yeah, I was that fourth guy, but as you'll see below, I was busy.

Two of my friends on this hunt are super successful backcountry hunters. If they weren't already very successful in their own career paths, you'd probably see them on YouTube with a heavily subscribed channel. They have been great mentors to my son, and I've tried to do the same as best I can. After a few hours hunting on the last day, he decided to give up on getting a big buck and use that tag to pack some meat back home. He spotted, stalked, boned out and packed out a doe that in my mind is his greatest hunting accomplishment -- and that is for a kid with some nice antlers on the wall. It was all him, except for me doing bear overwatch while he boned it out. I greatly appreciate the opportunity he had to do that.

Great trip with great friends, and two thumbs up to Kodiak Combos.

Great write up !
But we need pictures
OP
C

You asked for it. Note these are not curated and not all my photos. I'm the dude with the white beard. My son is the guy trying to grow a beard. It has since departed.

My son and that doe that was the best deer of the trip IMO. Sorry for the shadow. I was fatigued and excited. That hill behind him is SO much steeper than it looks. The deer rolled at least fifty yards down hill after he dropped her in her tracks. He then dragged her down another hundred yards or so to this relatively "flat" spot to bone her out. 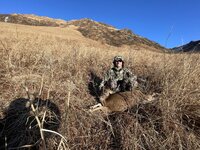 Me, my son and my buck. It wasn't perfect, but we got it done. 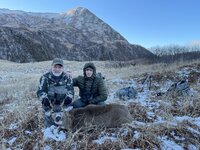 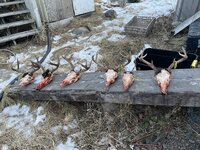 Good friend Dave and his buck. 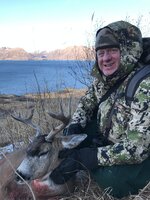 The gang and our first delicious dinner. 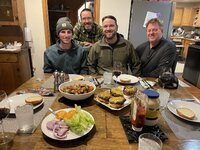 Looking back towards shore from where my son killed that deer. The boat is out beyond those rocks. Thanks for the write up. The Peterson's seem like great hosts and knowledgeable outfitters based on my preliminary conversations. Your experience on the ground certainly bears that out. Appreciate the insight.

What a trip. Congrats to you all. Going with your son had to make it that much better.
OP
C

Yes, going with my son made it an exponentially bigger trip. Got my Euro back pretty quickly. Looks like a great trip. That is quickly climbing up my bucket list of hunts.
OP
C

It was definitely a fun one. By the way, if anyone is headed up there next year, I've got GPS coordinates for the basic area where I lost my prescription glasses. Will pay a reward if you find them.

CCH said:
It was definitely a fun one. By the way, if anyone is headed up there next year, I've got GPS coordinates for the basic area where I lost my prescription glasses. Will pay a reward if you find them.
Click to expand...

Kodiak claimed one of my range finders this year.

rooster440 said:
Kodiak claimed one of my range finders this year.

If anyone finds my gps on the tundra west of Pilot Station, let me know and I will send you the charger and spare batteries

B
Youth on Kodiak?

Renting an Arctic Oven and stove on Kodiak?