Hey all. I'm in the final stages of prep for a muzz hunt that starts next week. I'm going with friend and Rokslide member @VANDAL He took a sweet typical earlier this year here and we're hoping to put at least one more of those on the skinning pole, this time with our smokepoles. My son Cash will be hunting with us for a few days, too.

Over the next week, we'll update this thread with our pre-hunt prep, like the hunt plan, guns, gear, and such.

First, I get so so many questions from hunters on how to hunt new areas they can't scout. While I quit hunting areas I can't scout about 10 years ago (and my success jumped), there will always be chances to hunt new places where scouting may not be possible. What I do in those situations is rely on the buddy system--that is go with someone who knows the area. This can save you days and even seasons of frustrations. Google Earth lies, making us think "Oh, I'll just skate right into this unit and hit X, Y, and Z...tag filled!" A week later we're licking our wounds after giving up on the area when we found out "X, Y, Z" were on everyone else's hunt plan, or they just didn't hold deer when we could be there. That's where the buddy system helps. It helps you narrow down huge chunks of country into more manageable hunt areas before you run out of energy or time.

So when Vandal and I were discussing our yearly hunt plans this spring and he mentioned returning to a unit where he killed a good 28" buck a few seasons back, I couldn't help but invite myself (hahahaha, he'd actually been inviting me on other hunts over the years.) Being the great guy he is, the hunt was on!

Even before we got the tags, I started working on a load for my Knight Mountaineer in 45 Caliber (if you're curious on my caliber preference, I wrote an entire series on that subject, plus my method on building an extended range muzzleloader here.) I really wanted to run the Cooper Muzzleloader I reviewed here (the same gun @dirtytough took a good Colorado buck with here) but until Cooper offers it percussion-cap capable, I can only use it in 209 states.

I started load development early because I've learned how much time it can take to develop an accurate muzzleloader load. Over the next five months, I made around 10 trips to the range, I settled on The Bull Shop 330 Keith Bullet @.452 in front of 90gr. Triple 7. Our own staff member @sabotloader helped me a lot in this project. From his recommendation of going with The Bull Shop (since Precision Rifle quit offerring their awesome conicals, I've been shopping for a new bullet maker) to converting my Knight Mountaineer from 209 ignition to percussion cap. He saved me much time and frustration. You'll find sabotloader on our muzzlelaoder forum here and I recommend reading his posts if you want to get into the muzzlelaoder game.

I just finished up my load testing yesterday. While I didn't get the 1MOA groups I like, I was able to hit an average of 2.5-3" groups at 100 with a scope, and a bit more once I switched to the XS Ghost Ring.

I tested the gun over several trips to 200 yards and found that it still grouped within the vital zone of a big mule deer. Yesterday, I even tested it to 250 yards. I was very pleased with the trajectory! Only 18" low at 250 yards and actually beat that 360 Precision Rifle Conical I used to shoot at 33" low at 250.

Here is my trajectory established over several range sessions:

If you want to see the gun in action, the video below covers that last range session

Cash will be shooting my old Khanke in 45 caliber for this hunt. You can see that gun in this old Rokslide video here on that hunt for a 191" Colorado buck.

If you want to follow this hunt, hit the Watch button, upper right of this post.
Last edited: Nov 18, 2019

OK, paying some bills here but if you need a quiet clothing system that will work well in the late season, read on.

I’m going to be running the Kryptek Vellus system. It’s a modern fleece with a liner and Thinsulate. 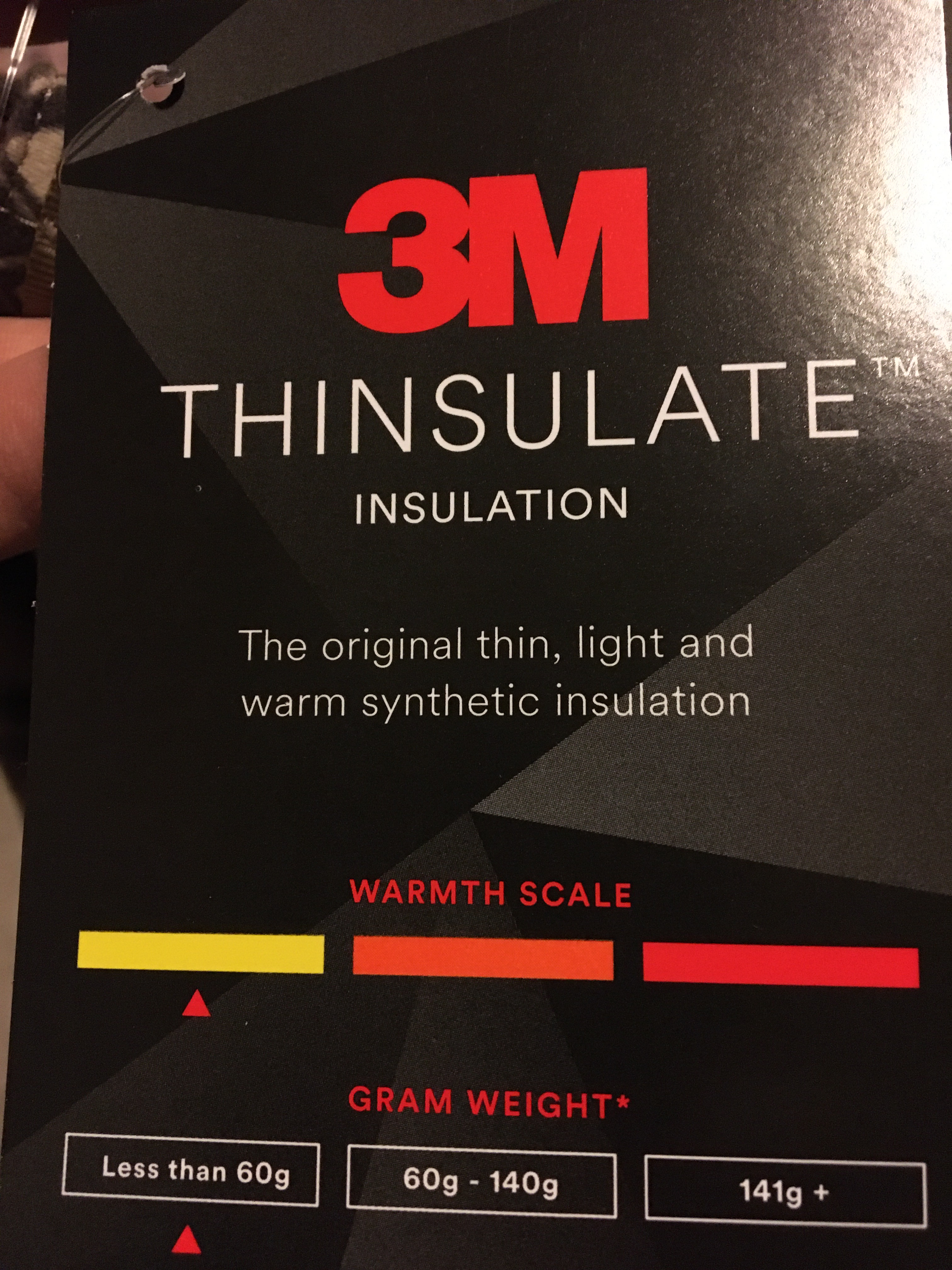 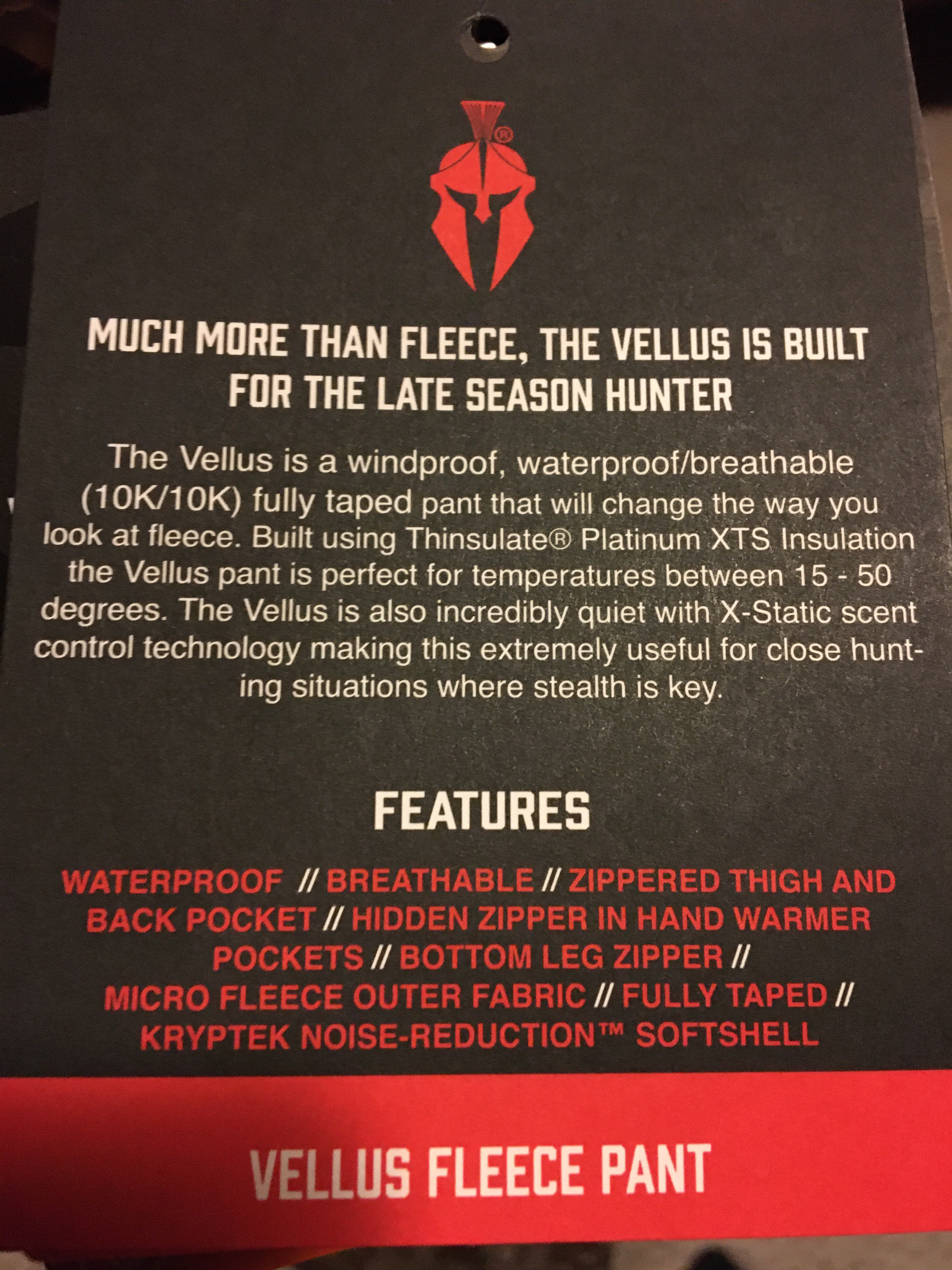 I did a big multi-media review on it a couple years back. It’s good for bow hunting but also really good for the late season. @Jared Bloomgren also reviewed it recently, and he’s used his a lot more than I have mine. It’s very durable.

I own the jacket, the Anorak coat, the vest (which is no longer offered) and the pants. 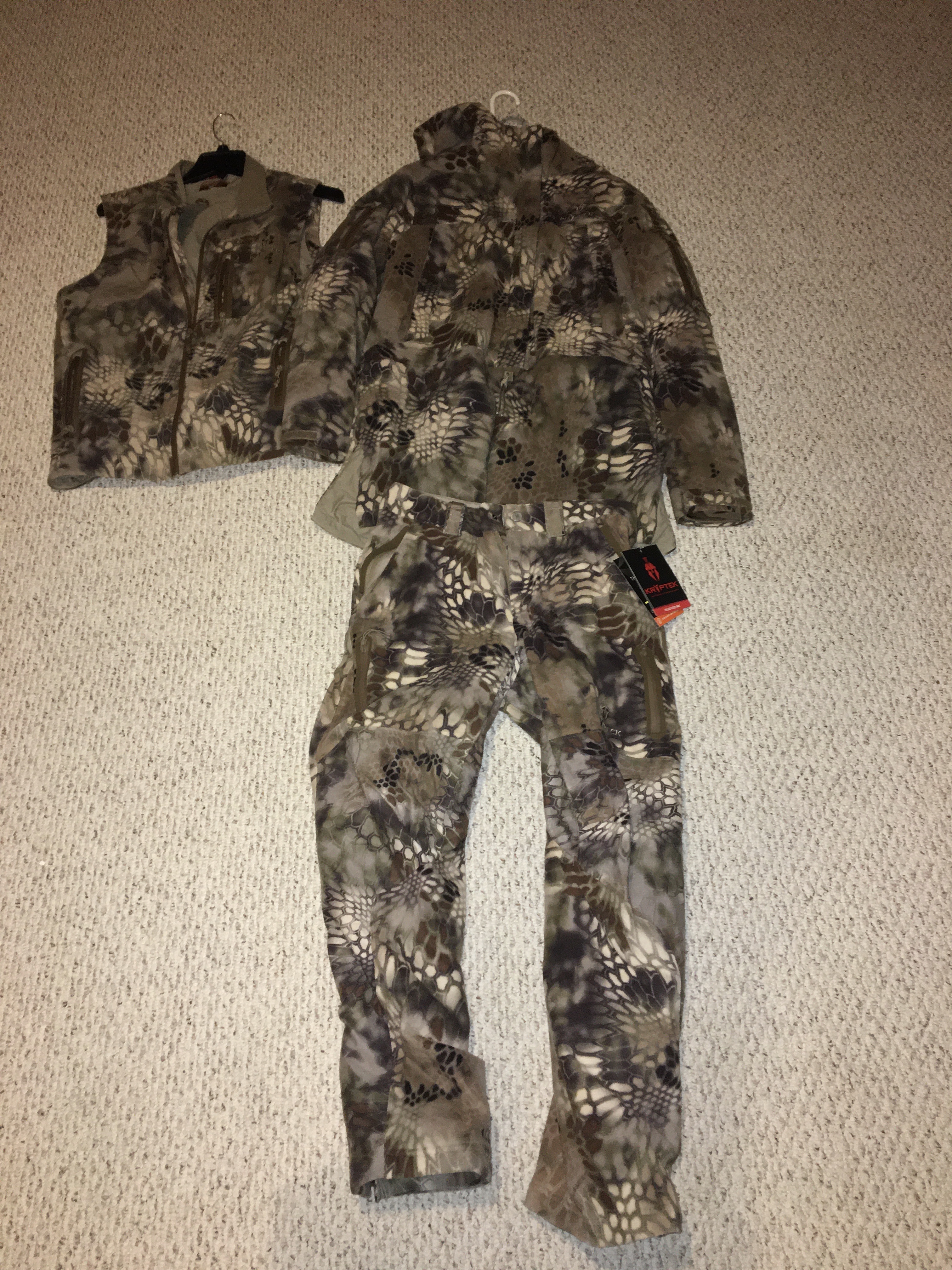 Between the pieces, you can hunt down into the single digits and below.

If you don't want to read, here's a video I did on the the Vellus function and jacket/vest


If you want info, here's Jared's recent review and mine from a few years back 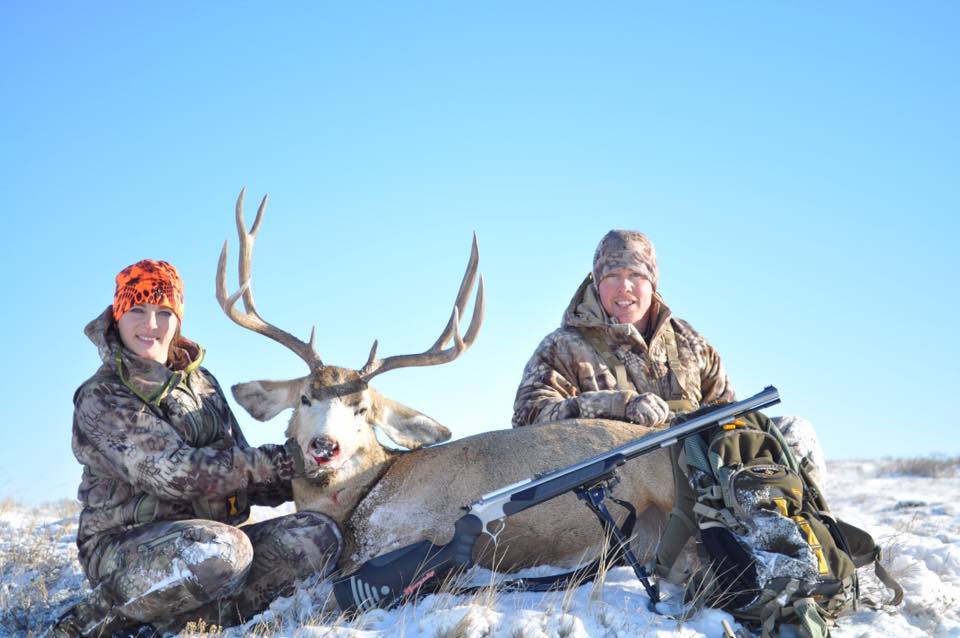 Fleece really has become a material of the past in the hunting arena, but it may be making its comeback just like other garments from yesteryear! Several years back, Kryptek introduced a new line of fleece clothing and it remains in their platform of hunting clothing. This Vellus kit comes in... 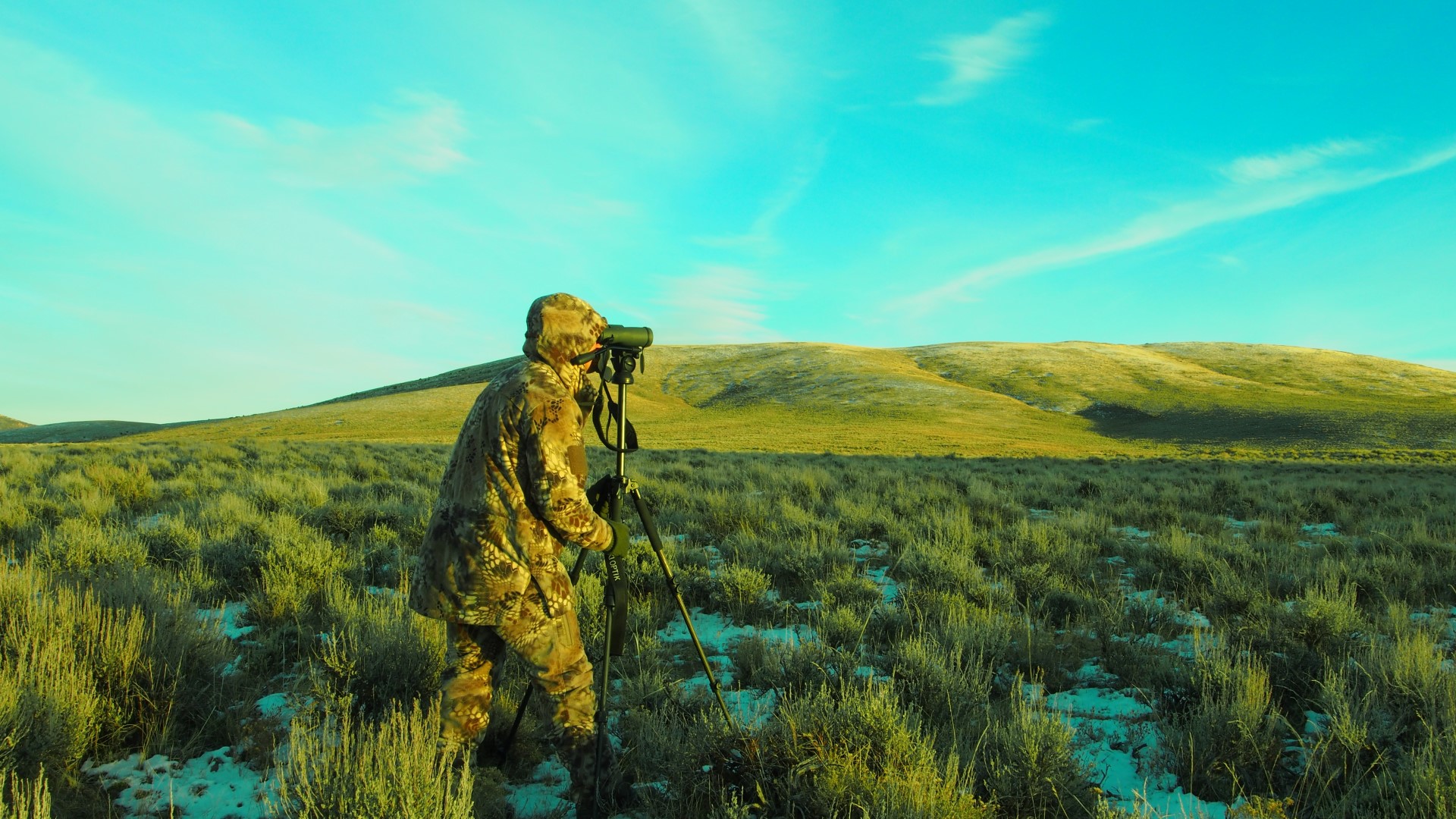 Kryptek Anorak & Vellus Cold Weather System Review By Robby Denning, Rokslide Co-Owner Hate to read? Then just scroll to the bottom for a link to a video review. I wore fleece quite a bit in the 1990’s. It was durable, warm, quiet, and could shed a light rain or snowstorm well enough. It’s...

www.rokslide.com
(some of the links in that one are expired but you can access the Vellus line here)

My son has taken over my jacket and pants, so for this hunt, I’ll just run the Anorak on the days he’s with me and steal back my jacket when he's not.

This is him just a few weeks ago in it:

@C.Ryan so graciously sent me a new pair of pants for this hunt (thanks man). 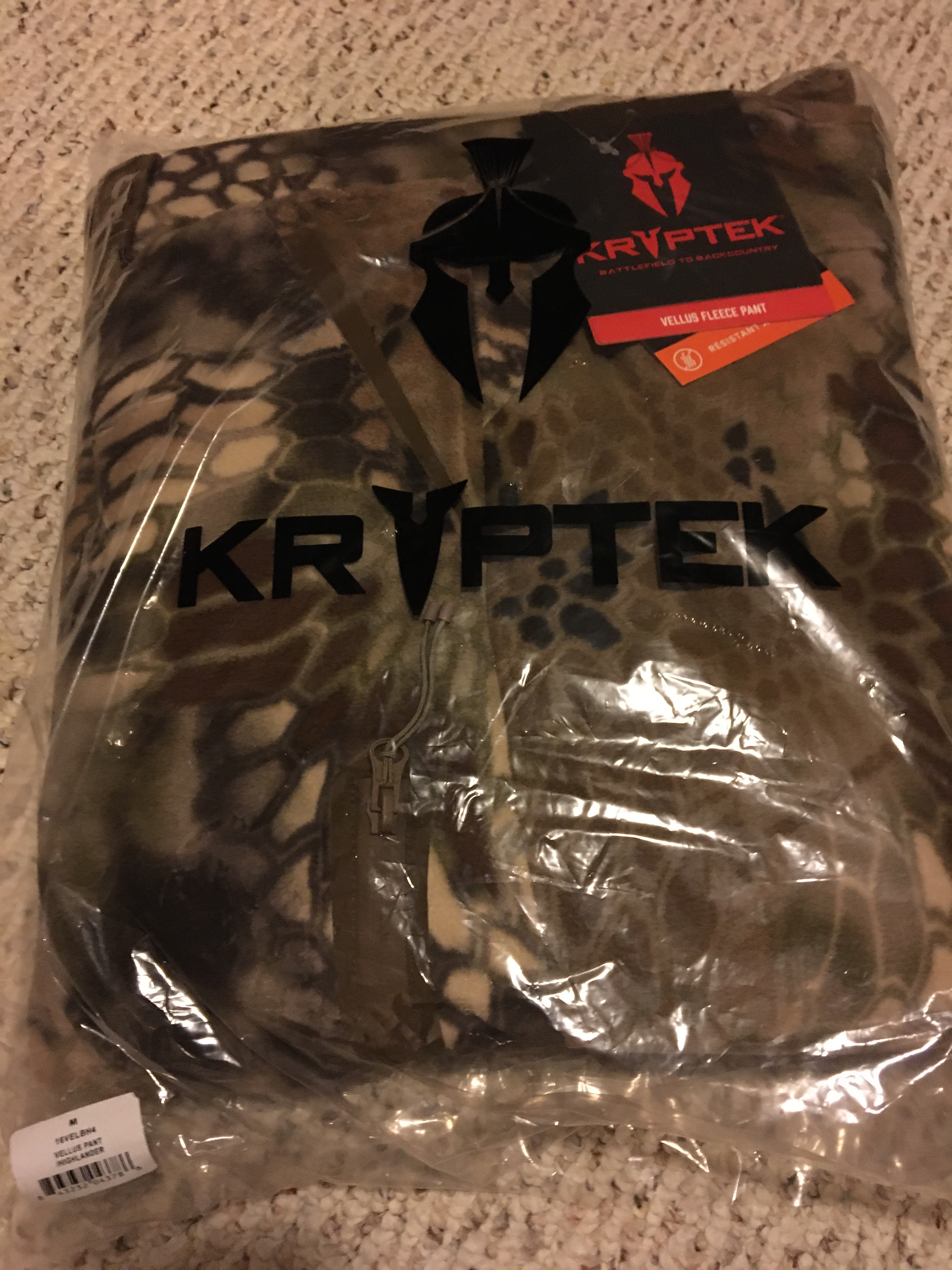 Interesting to compare them to my three-year old pair. Other than less shine, hardly any difference as they wear so well.

Looking forward to this hunt and ready to hit it hard!

As Robby said I had this hunt a few years ago and was fortunate to kill a good buck. Here’s the pic of the buck I shot in 2017. Hope we can beat it this year! 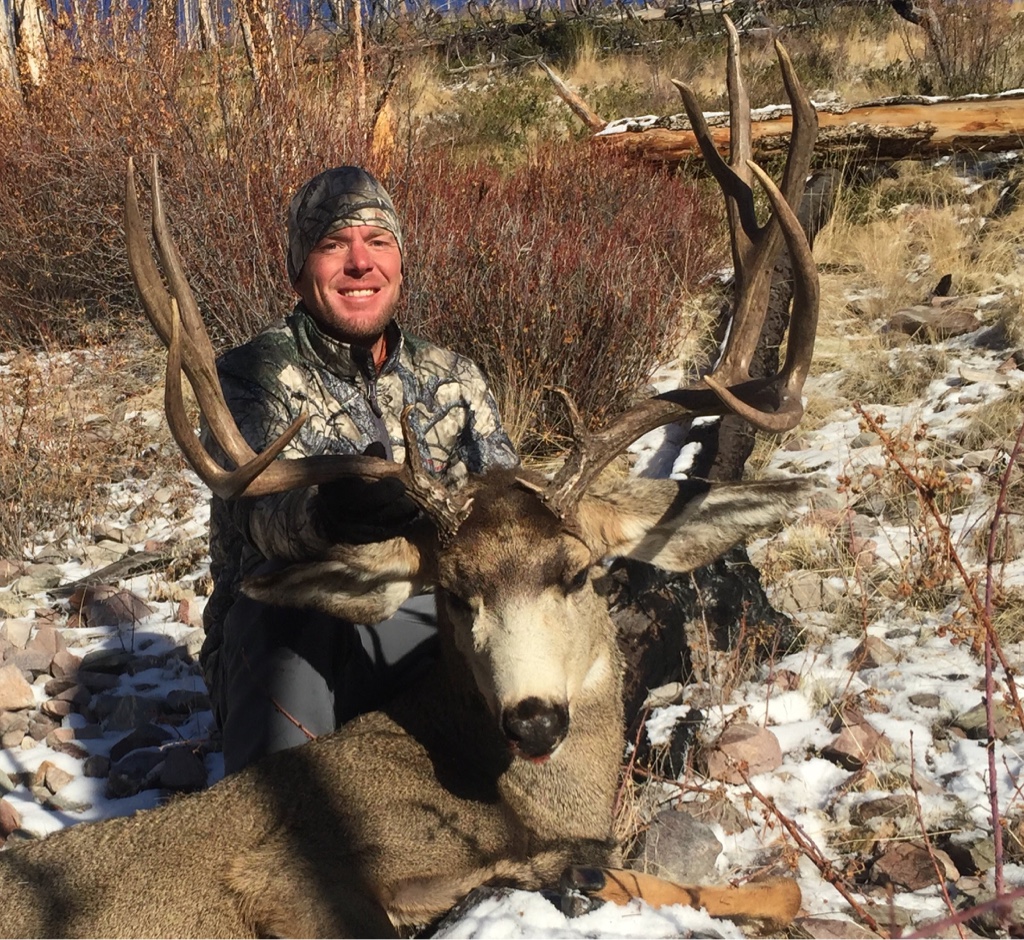 What I learned is to have a chance we will need to cover a tremendous amount of country. This unit does not have a primary wintering area that you can focus on to see a large number deer. It’s more comprised of pockets and isolated areas of small sub-populations of deer. These pockets can be miles apart.

What we do have in our favor is the weather. Post rut and cold! The deer should be moving and feeding most of the day. The days go fast and the nights are long!

All that, and you should sleep with one eye open

mtnwrunner said:
Following..........
Vandal, that is one buy a new house so I can show of my mount buck. Holy cow.

Agreed! Thats a deer that hangs where the tv used to be

This is going to be a blast to watch!
P

Best of luck. Always learn something from your hunts and truly appreciate you taking the time to document and share them.
J

Im excited for you guys.Ill be hanging on every word while over here at work.
V

Powder and bullet is in. Barrel sealed. We will be taking off here shortly.

Excited... will be a great hunt!
D

VANDAL said:
Powder and bullet is in. Barrel sealed. We will be taking off here shortly.

Please excuse my ignorance. What did you seal the barrel with? Is that a balloon or some sort of acrylic?

Cash will be here Friday-Sunday.

Just electrical tape is all I used to tape my barrel with.