Firestone said:
Wondering if you all got pictures of your first bull. Heres my dad and me in 2001 with my first Montana bull. I can remember it like it was yesterday View attachment 251557
Click to expand...

Here’s mine, this past season archery with my two sons. Best experience ever! Man I wish I had some pics of my first bull. He was a Wyoming bull when I was 14. Great memories.

Waited until I was in mid thirties before I went on my first hunt and wished I’d started years ago. Came up empty handed in MT last year but still worth the trip from WV just to hunt those mountains!! 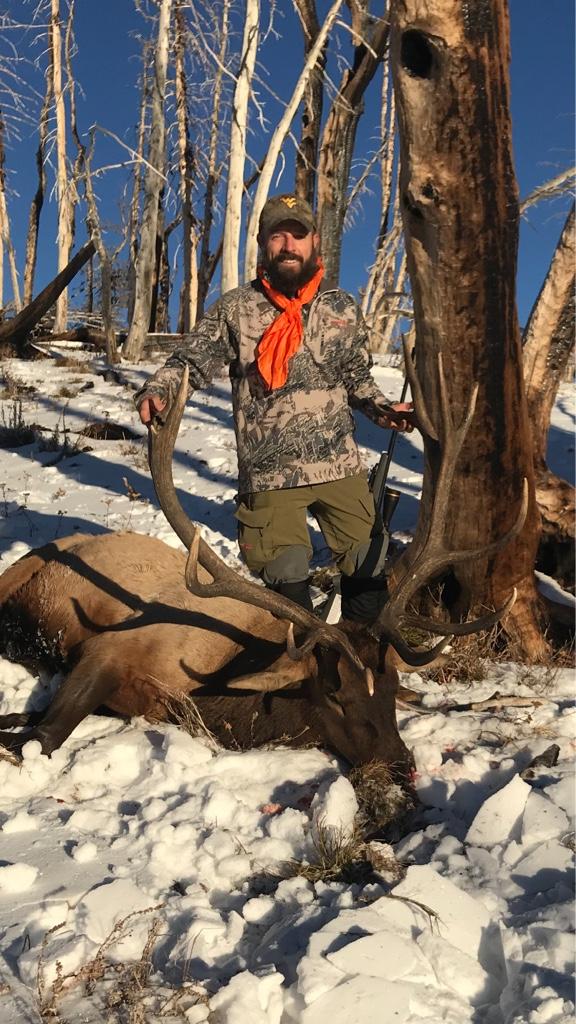 Finally was able to take out this 7.5 year old herd bull on the last day of my hunt. I had to elicit some help to get him out and make it to the airport the next day. Fortunately, he wasn't too far in. I still get the enjoy the memories of the hunt. 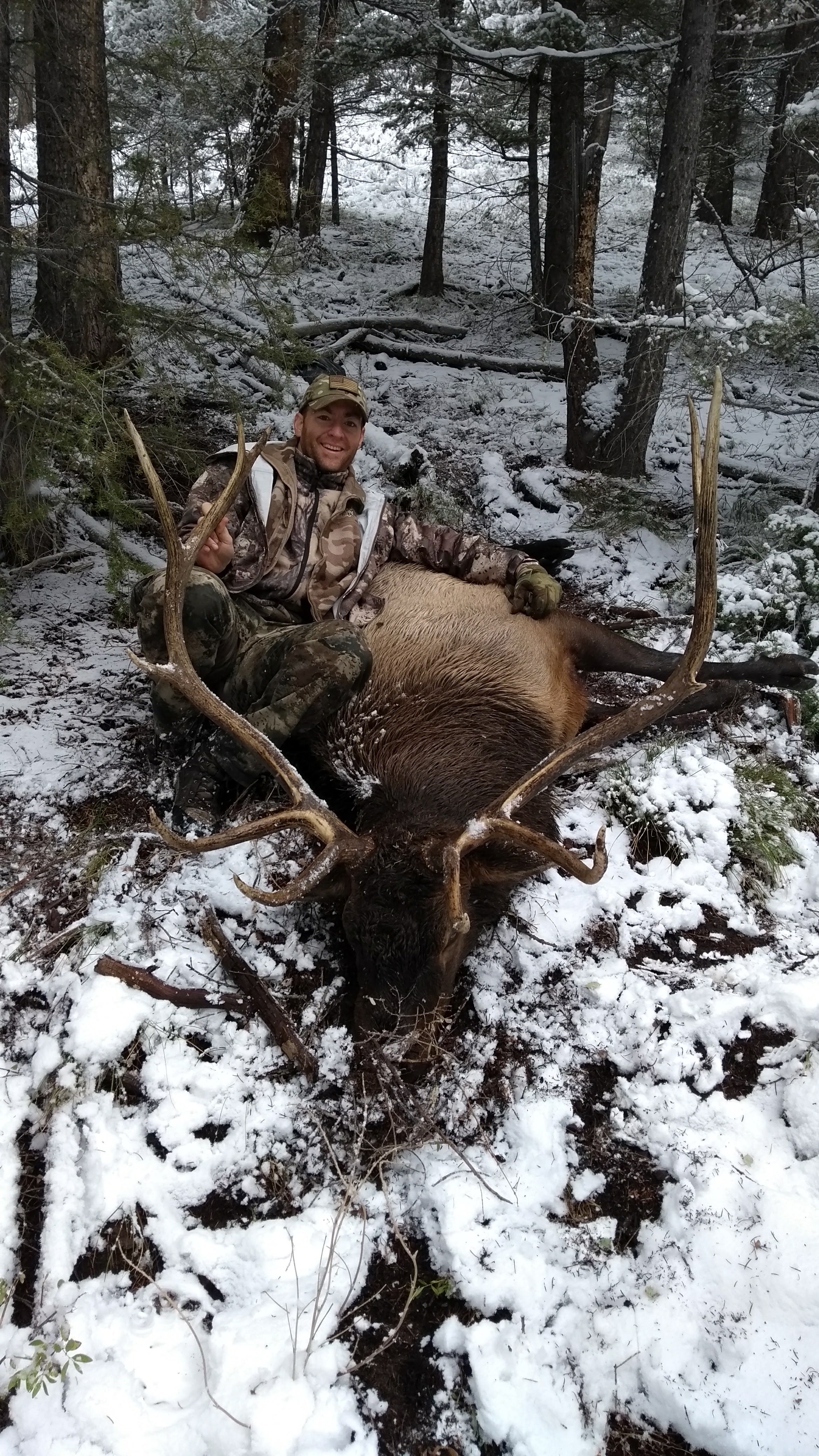 They say you never forget your first. In fact I still remember it like it was yesterday. It all played out so perfect. I had solicited a couple “lazy bugles” in mid morning.

Then it started raining. I had to hunker down all day donning rain gear under and backed up in an overhanging Piñon Pine. There were 2 bulls that gave the lazy bugle throughout the day from about 300 yards apart. Each on top of their own knob. A great position to be in.

I was smack dab in the middle of them with nowhere to go. This is the day I learned patience and developed a tactic that works for me to this day. It had quit raining around 3:30. I’d waited the rain out for 6 and a half hours.

Got to watch some turkeys literally only feet from me and they never knew I was there. My mind was actually focused on staying undetected by those birds just so I could observe their behavior amongst themselves.

Forgetting all about the fact that I had to leave the next day and catch a flight back to Hawaii in a few days. I was oblivious. Watching those Tom’s vying for the hens. Jumping up and thumping each other in the chest with their spurs. Taking turns as if to see who would blink first.

meanwhile an occasional unsolicited lazy bugle would remind me that I was their to hopefully kill my first bull after killing 3 cows in successive years. It’s funny how your mind drifts as you are enjoying what God put in front of you for your eyes only at that particular moment.

anywho, after stuffing my rain gear in to that cheap azz Badlands 2800 with a broken zipper, it was go time! I had only recently gained control and confidence with a mouth reed call. I think it was the brown Bugling Bull diaphragm I used that day.

I decided to work my way over to the ridge to the south circling to get the wind. I just eased my way over 1 step at a time. I had been about 2-300 yards away from both elk all afternoon. It was now or never as daylight was winding down for the day.

So I moved to the first bed and he was gone. Without saying hello, goodbye, no f u or nothing. He was gone! So what the hell I had to try and make something happen. It was obvious where he had bedded. It smelled very strong of elk piss. So I bugled from his bed. And right away he answers me from below. He had went down to the bottom of the drainage below on the other side of the saddle between the 2 nobs.

not sure what happened to the other bull come to think of it. But I knew where this bull was. So I hustled over to the saddle in the direction above his bugle and let out some very loud whiney/pleading cow calls with My Carlton Long Ranger followed by a couple screams. That bull went ape shit and that’s the first time I’d heard those ape like grunts that I had only heard my mentors make while teaching me how to use a mouth read. Thanks Gregg and Paul AKA ElkNut1.

but the bull wasn’t staying still. I had over shot where I needed to be in that saddle as the bull started back up on the side of that saddle where he’d been bedded. So I ran back to that side of the saddle and now only gave a couple soft yet subtle cow calls with my gen 1 Temptress call. I still have that call and I think it’s better than the models that followed it up.

now I could see the bull coming thru the alligator junipers and whatever kind of oak trees those are that grow in the Gila. I remember I had ranged a tree to my right at 30 yards. Watching that bull peering thru the trees and bugle trying to find the other elk, I slowly turned my head in the opposite direction and made thee most perfect soft cow call that I’ve probably made to this day with that Bugling Bull Temptress. And it was just enough that the bull could not tell exactly where the sound came from, but it got him coming.

I had also been practicing my shots from any possible position and was now on 2 knees watching the bull walk right into my wheelhouse. I’d also been practicing my calling heavily all summer long gaining control. I’ll bet I blew out 30 reeds that summer. Funny 1 of the things I had practiced was drawing my bow as I make a “nervous grunt” sound. There was a little hand eye ear coordination I had to master doing that believe it or not.

And now the “moment of truth” was upon me as the bull slipped in on the other side of that tree I had ranged. On the other side of that tree I had like a 2’x2’ window that if not played just right would end in yet another failed or blown chance of a golden opportunity. So as the bull steps into that window, I made the perfectly timed perfectly sounding nervous grunt as I drew my D350 and the bull stopped on a dime. Right on Q as ElkNut1 had eluded too many times when stopping an elk in its tracks for the shot.

I settled my 40 yard pin on the only shot I had, a high lung a little back, and touched it off, pulling thru the shot and all that was sticking out were my fletchings. I knew I had just made a perfect shot and killed my first bull as I heard him fall. I heard the moan and knew it was over as he coughed 1 last breath. When I walked over I was amazed at what had just happened and what I was looking at. I took this pic where he laid his head to rest. What a great hunt! 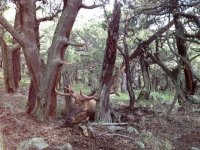 Buying my first ever elk tag this year. WY General. Hopefully I can contribute in a few months.

Sent from my Pixel 3 using Tapatalk What a great thread! Bringing back a lot of nostalgia reminiscing about old hunts. This was my first elk in 2006.

Colorado 2007 2nd or 3rd Rifle OTC. 1st time hunting elk with a rifle. (taken a few cows with my bow previously). Solo hunt and quartering. Got some lovely reinforcement for the main packing (my now wife). The photo was taken at the trailhead when she came up to help with the packing! 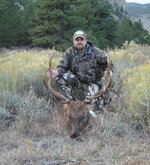 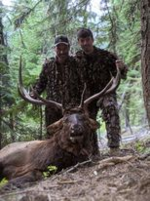 Got my first bull this year with my first tag (Archery). That is my dad by my side!

Here is my first bull from back in 2013. After 3 years of trying to figure out how to kill one of those things, I was able to arrow a good one!

kamcgraw said:
Here is my first bull from back in 2013. After 3 years of trying to figure out how to kill one of those things, I was able to arrow a good one!
Click to expand...

Heck of a bull!
S

WY 2007 DIY public ground. Shot with a bow at 8 feet. I thought my heart was going to blow through my chest! 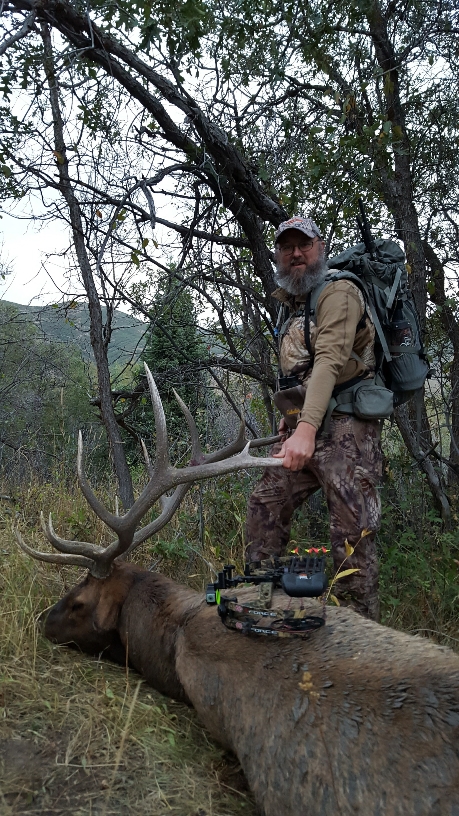 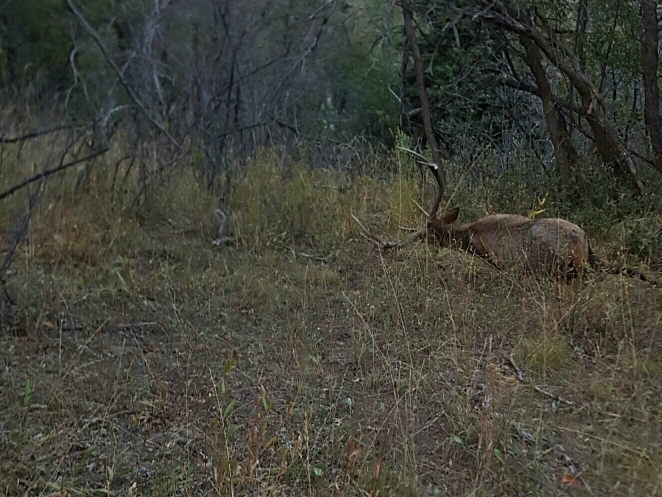 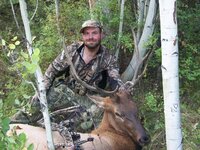 My first elk hunt. Three of us from kentucky went DIY to Colorado 2013. Two of us killed. This was my first ever bull 4x4.
P

Those are great! This fall will be my first elk hunt hopefully I can post a photo also! 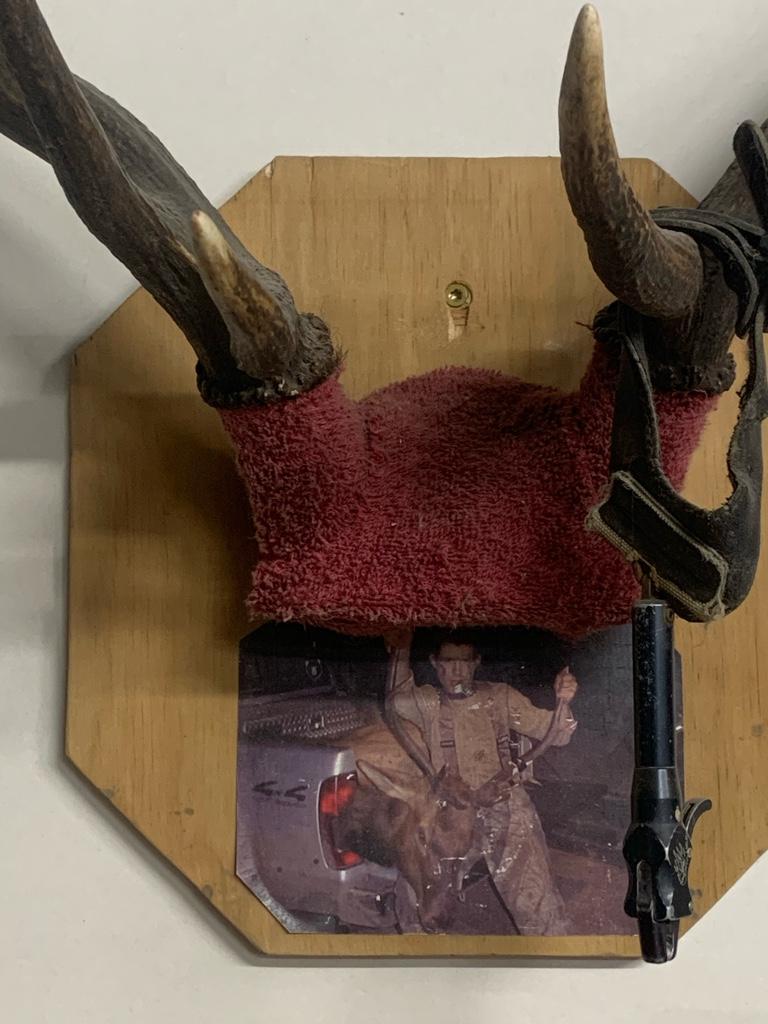 Think that was 20 years ago lol last day last light came in on a string stopped at 42 yards he ran down the closed road and died on the landing we winched him about 200 yards down off the hill to a open road. I was 13 at the time first year bow hunting