Indian Summer said:
This thread would make a good post on a “What rifle should I buy” thread. Poking a hole in an elk doesn’t necessarily mean it’s going to die. And even if it does that doesn’t mean you’ll find it. If a guy is asking what gun to consider then he surely has no experience with how tough elk are and cannot imagine. A deer is tough. Times that by 100! Not to rekindle the peashooter/magnum debate but listen up people!
Click to expand...

Just because you saw it fall doesn’t mean it’s dead.

They also don’t bleed like whitetails. I’m not sure if it’s the fur, hide, or what, but elk just don’t give up much (or in some cases any) blood to track.

A few heartaches and hard lessons learned there.
M

We killed a Cow missing its right front leg, a bull with a shattered right front in its top joint and a other bull with several superficial wounds.

The bull with the broken right front had healed over with scar tossue holding the entire joint together. I walked normally and was fighting with another bull just prior to me killing him at 35 yards. The bullet went through the leg and lodged in the brisket.

My buddy killed this bull last fall in Montana, after getting it home and boiling the skull out we realized it had been shot with a arrow through the face, the broadhead was in the orbital socket and the bone was growing around it! Seemed perfectly healthy , he sounded radical with a arrow in his nasal cavity! 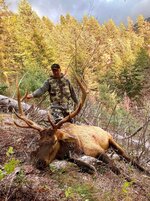 My first bull had a Muzzy in his neck and a muzzleloader round near his back above his lung and below his spine. Is this no mans land?
M

A local outfitter told me about a bull they killed 8 or so years ago. His client shot a bull in 2nd rifle season and when they started to break him down they found a broad head and about 5 inches of arrow shaft stuck in its testicles. They were swollen to the size of a cantaloupe or so and most of the meat off the back quarters was junk it was so filled with infection. That bull went from getting stuck sometime in September clear to the middle of October with that arrow in his nads.

Killed an antelope buck a few years ago that had holes in both horns. When I boiled the head and popped the horns off, there was a muzzleloader round stuck into the bone on one side, and the bone on the other side was totally demolished.

The buck was acting super crazy the whole time I was stalking him. Presumably from a massive headache from taking a muzzleloader through both horn bones 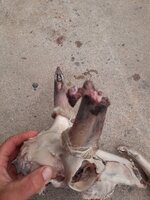 We've shot multiple elk with bullets and broadheads in them, various places. My brother found a bull shed hunting with a severely broken hind leg. He was watching it to pick up the deadhead. I told him the bull would prob live. He watched it for weeks, the ol bull gave him the slip, didnt die. To say they are tough is like calling Stephen Hawking smart...doesnt even come close.
G

Not really a " mangeled" story, but old post of "guess the age of this elk" . My son shot a cow elk in western North Dakota last year that was tooth aged at 15.5 years old. It is amazing how tough those animals are and to make it through that many winters let alone a broad head in the skull.

BigAntlerGetter said:
Seen a cow had both front legs shot off above the knee. She hung out year round on a piece of private ground, still had a calf every year for several years, when she needed to get away she would lean back and basically run on her back 2 feet in a way. Feeding she would just drop down to her chest and push herself along.

My dad shot a cow one year with 3 legs, shoulder didn’t have Much meat on it but what was there was super tender.

Guiding one year had a Hunter make a horrible shot at a bull quartering away, ended up shooting him in the left rear ham with his 30-06 at 225 yards. We never ended up finding him. Fast forward 5 years my brother is guiding for the same outfit, they harvest a bull and are cutting the left rear ham off, the hip was all fused together and pretty wrecked. Cut through it with a saw and got to the back of the ham and sliced into the nastiest puss filled pocket they’d every seen. Working to get as much meat off as they could ended up finding a bullet in the ham… turned out to be a 30-06….

Broadheads in shoulders, spines, necks, ribs. Found a few bullets here and there, go to a processor and ask them what they’ve pulled out of animals lol. Some have a bucket full of all kinds of neat stuff

In search of three legged animals or one that is limping. must eat tender meat hahaha
M

When I was a kid hunting with my dad we found a fawn with his right rear leg twisted up in the top strands of a fence. He had been there a while as the magpies were pecking on it and a golden eagle was sitting 50yds away watching. It was a deep wound, you could see a lot of bone. We let him out and watched him hobble away. The next year dad shot a 2 point in the same little draw that had a scar encircling the same leg in the same spot, can’t prove it was the same deer but I’m convinced.

Dug a wolf tooth out of this moose skull in Alaska. 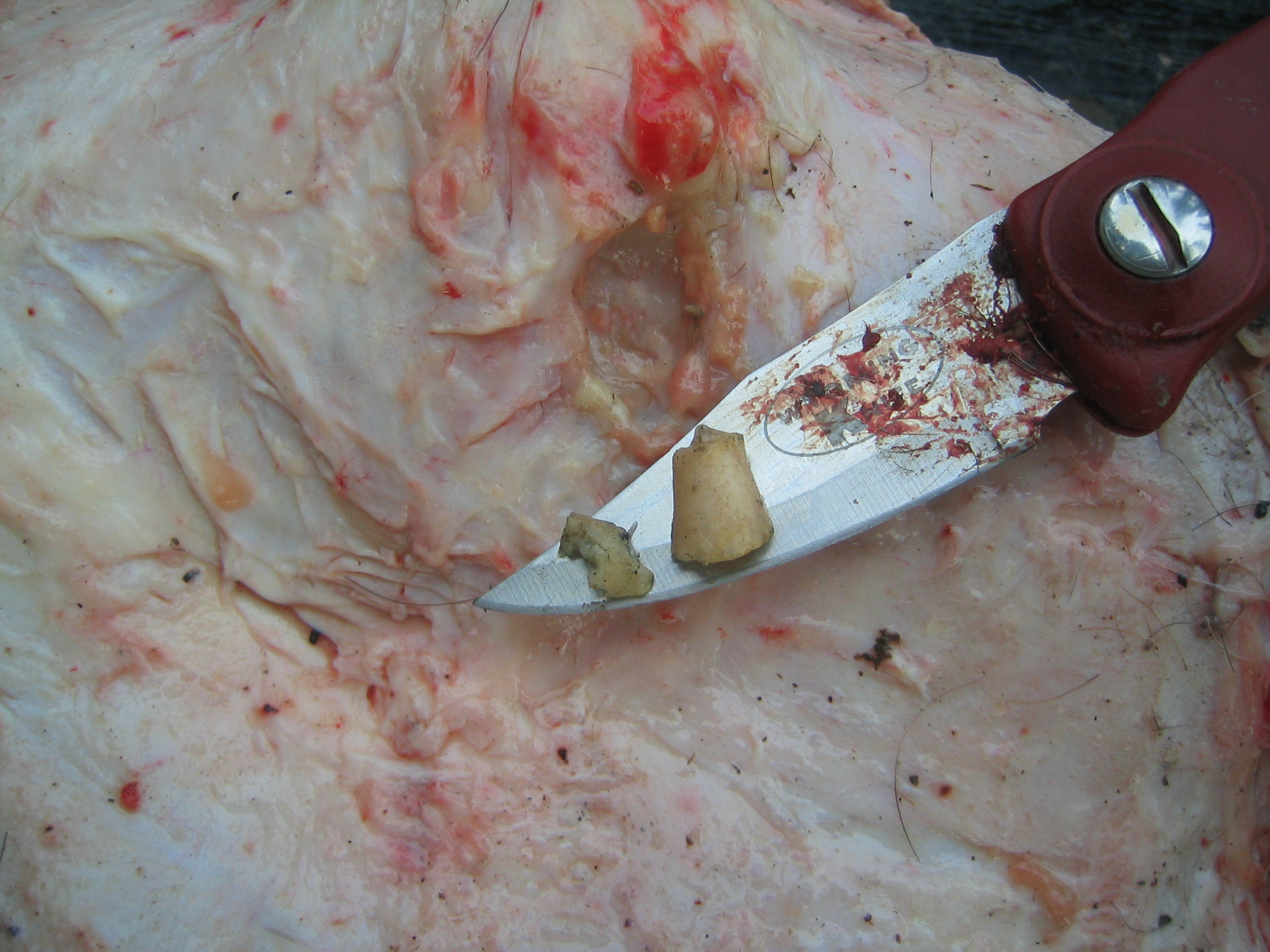 shot 2 different Bulls in Montana one the 2nd day of opening week rifle. The other 4th day.
Both had bullet holes through the antlers from earlier close calls.

I shot a 3 legged cow with my bow once, her missing front leg was blown off below the "knee", there was still shrapnel in the joint. There was hardly meat in that shoulder, it had atrophied pretty severely. In contrast, the hindquarter on the opposite side was way bigger than the hindquarter on the missing leg side.
I called in a 5 point bull for my buddy a few years back, while butchering it out, we found 2 bullets and an old arrow/broadhead lodged in it.

The 1st bear I ever killed had messed up front leg. It had survived a rifle shot in the front shoulder the year before. The shoulder blade was a mass of bone fragments and scar tissue still, and the bear couldn't use the leg at all. I couldn't tell before I shot it, it was just out feeding in a clearcut right before dark.

Pony Soldier said:
The family had done well one year and we encountered a cow and a calf above the road. We missed and I drove around to intercept them. Being young, I ran over the hill just in time to see them as they broke out of the jungle. The cow was in the lead and I only needed a calf so that was my choice. As I was cleaning it my dad showed up and I said well here's a calf. He looked at me and said I don't think so.

Under closer examination it was indeed not a calf. She was wet and had lost her calf. Her hooves were so long they turned up and nearly crossed. She had lots of teeth because the crowns were gone and only the polished roots remained including the eye teeth. We cut some chops for breakfast but struggled to have the strength to chew through them. We ground her up in hamburger and every bite was like eating a mouthful of superballs.

I glued the teeth/roots back into the skull after I cleaned it and gave it to the zoology dept. at NDSU. The best guess any is us had was she was older than 18.
Click to expand...

On the teeth subject, the bull I shot in the Bob last fall was missing a couple fronts and had a couple more fall out while we were processing him. The molars were flat. His ivories are basically just nubs with the centers exposed. No idea how old he was, but definitely an old warrior.

"Shot a nice 6x7 with my 30/06 this year. He was riddled with 6.5 Creedmoor bullets. He was walking around like nothing had happened"

Johnsonelk newbie: guessing 16-20+. Can be tender or rubber burger!
You must log in or register to reply here.