Made it into my run & gun pack (well...archery...but same concept). I needed it quieter and not flopping around so much and that MR belt just did not fit my body. Yes I could have sold the whole pack but I had alot of spare parts laying around and a couple of ideas so i went at it. It carries really well now and is quiet.

Replaced most clips with non-rattling ones - military issue - you can buy those in bulk and I do since I hate paying too much for clips and webbing.

I think the water holder is light fighter - can't remember as I bought that in Afghanistan when I was deployed there in 2004. I have the kill kit in the very bottom and then a 2 liter source bag sits on top of that. The bag then molds between the two frame rods and the weight is much closer to my body and up where it should be.

The bags attached are molle bags I had laying around - figure i would try them out and so far i like them. Survival and first aid in the bottom pouch and anything else in the top. First aid is basic - flat packaged H bandage and a quickclot gauze, coupla meds.

The belt is the Gregory Women's belt on sale at Moosejaw right now. I had an eberlestock on there earlier in the week and that carried much better than the tiny MR belt...but the Gregory blows them both out of the water as it cups my hips perfectly. I cut off the wings that the MR belt slides through as the belt not being able to move really hurt my back pretty bad so they had to go...and would not have worked with the other belts anyway. I think the men's version is on sale too right now if you wanted to try out their hipbelt. They go for around 50 or less on sale and come with molle so attaching things to the belt is easy. You do need to sew velcro onto the middle part that slides behind the lumbar pad but that is not hard to do.

Since it's the older pack and sized differently I cut off an inch at the bottom of the shoulder straps panel (the part that slides into the pack and adjusts to your body size). I tried the women's shoulder harness first but that is made for tiny women imo (I have broad shoulders so women's packs generally don't fit me well at all).

I love the pack now and some might think I was crazy for doing all this but like I said I had extra parts and kinda wanted a meat carrying run & gun pack anyway so I used what was at hand and stopped wondering what the mods would do. 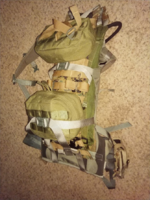 Perfect mods! I love what you’ve done with your pack. The Pop Up is a truly untapped base for pack modifications in my opinion.

You have inspired me to get rolling on making my own Pop Up frame and pack after letting the materials sit for a while. Thanks for that!
OP

You are welcome! It was pretty fun to do and worked out extremely well for me. I guess what I learned from this is you don't always have to sell but can mod instead.
S 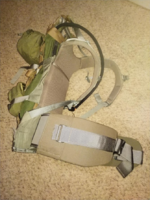 Just tried the EXO K3 for K2 hip belt - plugs right in and is more comfy but obviously heftier than any of the previous options. You do have to remove one of the side pads to install - just like in exo's instruction video for fitting that belt to their K2 packs - exactly the same...but it fits perfect. Feels like heavier packouts would be much comfier with this belt. Not sure if I will leave it on for it's intended purpose though. I originally bought it to try on my eberlestock F1 but the velcro on the back is opposite of what is needed. Probably either sew the correct velcro on it or maybe try the K3 belt for that frame. I did slide it in the f1 and it is comfier than the xl eberlestock belt by far.

I have version 1 of the pop-up...so if you want a better hipbelt without having to mod too much that is an option for people.

If you have the newer version of the popup packs the velcro is opposite on the stock belt (loops rather than hooks) - so you would have to mod the k3-for k2 belt to get it to work. Being that the pads are huge it will not slide through the lumbar pad without removing one side of the belt - so I think you are stuck with that belt and having to sew the right velcro on it if you want to mod the later popup packs. I could be wrong though - maybe if the newer k3 belt has the right velcro the install procedure would be the same.

HTH's someone out there - this mod would be for if you really need to pack out bigger loads with the tiny pack....and like modding your gear to fit you.
Last edited: Sep 21, 2021

Looks good , I changed the MR belt out and added a Kifaru because I like molle pouches. It is a game changer for the pop up frame.
4

Randle said:
Looks good , I changed the MR belt out and added a Kifaru because I like molle pouches. It is a game changer for the pop up frame.
Click to expand...

duplex . the pop up has a narrow slot.
I left the wings on the pop up until I am sure thus is how I want it .Just molled them to the duplex belt
T

i assume the kifaru duplex would work on the 38 as well? hmmm...
S

Pulled the pack off the frame of my 28 last night. I think I'm going to make a hotshot type setup. With a bag and load shelf on the bottom and some molle/pals up top. Then I can mount the platform up top.
Just need to find some buckles to match the existing ones. That way I won't have cut anything and I can go back to the pack if I need to (or want to sell). Mine is the newer style with the SJ autolock buckles. Unfortunately for me, it was not the mojave style autolocks, I have several of those laying around.

Looks like there are two different buckles on the pack, the SJ std and SJ lite. Both snap into each other. MR is sold out of the time machine kit, which is what I'd need. Hard to find the SJ buckles from other places (that accept smaller orders). I did find this though, https://moskomoto.com/products/sj-buckles. Pretty sure that is the same as the std (non-lite) version of the buckle on my pack. I ordered, so we will see if fits.
C

@shotacoffey did those buckles from mosko moto fit? I'm having the same troubles waiting on the time machine buckles. I ordered a sling from a guy on rokslide to do basically what you're wanting to do but still have some load out capabilities but I can't attach it to my frame because I don't have buckles.
S

ccrider0812 said:
@shotacoffey did those buckles from mosko moto fit? I'm having the same troubles waiting on the time machine buckles. I ordered a sling from a guy on rokslide to do basically what you're wanting to do but still have some load out capabilities but I can't attach it to my frame because I don't have buckles.
Click to expand...

Yeah they worked perfect. Didn't take too long to ship either.

ETA: I got the 25mm Dual Adjust, but I think any of the 25mm options should work.
OP

For anyone fighting with buckles - there are suppliers on the web where you can buy stuff in bulk and then when your pack's buckles break or you desire change you can go into your stash and do the mods without waiting and without being dependent on the pack's creator.

I have a stash of this type of stuff so make my own straps for different packs - most of my packs then wind up with the same buckles and I have sanity then with compatibility and with repairs.

And much less cost for extension straps and whatnot....it's pretty useful.

Do you mind sharing where you got those buckles? It seems like duraflex buckles are hard to come by.
OP

ccrider0812 said:
Do you mind sharing where you got those buckles? It seems like duraflex buckles are hard to come by.
Click to expand...

not specifically MR's type buckles - but I tend to change mine anyways which is not a problem if you pick a style you like and then adapt your packs to that.

I don't like having to marry a manufacturer for overpriced straps/buckles/etc....that's silly and I refuse to do it.
S

ccrider0812 said:
Do you mind sharing where you got those buckles? It seems like duraflex buckles are hard to come by.
Click to expand...

If you want to replaced without sewing, you'd need something similar to these, https://www.amazon.com/Condor-Buckle-Repair-Olive-Drab/dp/B00O28D9UO/ref=asc_df_B00O28D9UO/ This is just quick example link I found, no clue if they are any good. As trad said, I'd look to places like rockywoods or even more bulk type places if you need a good amount of them.

You want ones with the slot cut in the webbing attachment point. Like I've circled in the picture.

There is also the option of using things like the gatekeeper buckles that seek outside and others use.

Wednesday at 7:47 AM
Fitzwho
F