It has been a long time coming. I initially booked a 2020 dall hunt with Gana River in 2018. I had been dreaming of chasing sheep since I was a kid. We all know what happened the last two years, but the time actually went by fast. Unfortunately between when I was supposed to go in 2020 and 2022 I sustained a couple injuries to my right leg. Three surgeries later, with the last one on my right knee just a few weeks before my hunt, I was not able to train the way I had hoped to. Fortunately being and orthopedic surgeon myself I do have access to some advanced rehab and therapy and worked my ass off to get ready as much as I could. Being still fairly young (40) did help. Another 3 months would have been Ideal but couldn’t take postponing another year so I mentally prepared myself for a grinder…

The travel to the NWT was uneventful, and was able to fly out on the supercub on day zero of my hunt. We were dropped off in a river bottom landing strip and had a good 6-7 hour hike up into sheep country. While rugged the terrain was rugged it was manageable. We found some good rams on day 3 but after a cold 4 hour wait and getting to 200yds the fog and freezing rain rolled in and we made the decision to back out and try to find them the next day. We were able to find the band of 7 rams the the next morning and my hopes
were high as the weather improved and at 350 yards could see there were three full curl rams with one heavy lamb tipped beauty. I was on the gun ready to finally take my first ram when after a closer 30 minute study with the spotter I got the thumbs down from my guide. He was only 8 and not the age range they like to take. While I have tremendous respect for the way they manage the sheep and realized it was the right decision I cant say it wasn’t mentally difficult to walk away.

We moved camp every day and covered a lot of miles the next few but I tried to stay mentally positive. Day 7 we woke up to 3 inched of snow. The visibility was poor so waited in the tent until noon when the weather improved dramatically. We decided to leave the tent set up and glass for the afternoon. After a good 5-6 mile side hill hike we spotted a band of 6 rams around 6pm. They were bedded but could see 3 looked to be 9+ years old with two really exceptional rams. It only took about three seconds looking at the one ram in the spotter to realize he was “the one”. Thankfully daylight isn’t much of a factor. Instead of feeding up the rams fed down a draining as the day progressed. After a 5 hour stalk 2 of the small rams shot up the other side across the drainage and we sprinted the last 50 yards and threw the pack down to get into range when the last 4 followed. The larger 4 rams finally stopped just shy of 400 yds and they finally separated for me to squeeze off a round into the wide ram. The bullet stopped just underneath the skin on the far shoulder and he went 10 yds and tipped over. He was a 10 year old flaring giant and beyond anything I could have hoped for. We finished pics and butchering at 2 am and spent a cold few hrs sleeping on the side of the mountain (fyi jetboiled water in a Nalgene under a puffy does wonder keeping you warm). It was about a 15 hr packout to the airstrip but I enjoyed every painful step.

I was able to make it back to camp and luck was on side as a respectable caribou bull wandered close enough the next day for a day hike to him to seal the deal. That left a final day of relaxing and fishing before we flew out. It was the trip of a lifetime and worth the wait. I would like to thank my guide Clayton for everything as well. I am envious of what they get to do for a living and nothing but respect. Gana River and Harold run a great outfit. We covered a lot of miles to find sheep but the NWT has it going on. We saw 32 rams in 10 days and 9 full curl rams.

Sidenotes: I was very happy with my gear choices with couple exceptions.
Tent-brought my own and glad I did. Nice to have space
Spotter-packed and brought my own but not necessary at all. It only took me a very quick look for me to see if it was a ram I would be happy with. Good binos are sufficient. Ran the nl 8x32 and loved them. I have a 10x42 nl and was happy to have the lighter ones.
Trekking poles: Carbon fiber sucks. Snapped one of day three and the other on day 6. I am short enough to remove a section and MacGyver them back together but never again.
Food: Brought my own and happy I did. Ran just over 1lb per day around 2500 calories and was never too hungry.

Happy to PM anyone my pack list. Went in with 9 days worth of food, gun, ammo, spotter, tent etc (everything but water) under 50lbs.

Finally here are some pics: 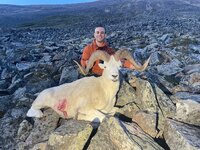 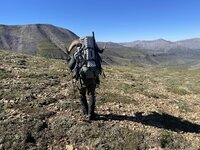 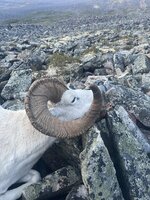 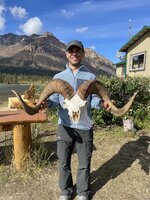 Forgot to mention thank you to Ohio Darin and Doc Holliday for their invaluable advice and insight in preparation for my trip.
OP

What a cranker! Congrats!
B

Awesome, big congratulations. Thanks for sharing.

Congrats to you. Beautiful trophies, and hard earned.
A

Awesome ram! Wish I could Be up in NwT this year
T

What a stud of a ram! Congratulations.

Dang! How awesome man congratulations on a beautiful sheep!

Close but no. 39 1/4 both sides. 32 inch tip-tip. A little shallow on the curl to break the 40 inch mark. I was chasing more of a “look” than number and he was exactly what I dreamed of in a ram. He has good mass for the NWT and carries it will. W
Harassed by a plane while sheep hunting

Went in for caribou…came out with a Ram!
2