My first pig with a traditional bow

You know those hunts you have where it all comes together in just a few seconds, and it seems too easy? This is one of those hunts.

I've been putting trail cameras out and checking them like mad over the last couple of weeks, trying to develop as much knowledge about the deer in the area as I can. The rut is just around the corner and I want to give myself the best chance of getting a buck on the ground with my recurve bow as possible.

While doing the deer scouting, I've been seeing plenty of pigs, both in person, and on the trail cameras. One of them is a real big fella, that I had on trail cameras during the drought, eating deer carcasses I was leaving around the place. I also saw him late Jan/early Feb, just poking around a farm track. All I had was my 45# recurve with me and he saw me before I even had a chance to think about a stalk.

After work on Friday I headed out to the spot thinking I'd just bump around and check the cameras. No real rush, but the chance of running into some critters that evening or the next morning was super high, so I packed my camera, a small tripod, and my bow, just in case something cool happened. I set out with the wind in my favour along the base of a big granite ridge, that I hoped would be a good spot to start checking for deer sign. Over the last few months I've been moving cameras around in an attempt to find the biggest concentrations of does, so I could think about ways to approach the spots when the bucks move on.

For the first time this year, the place seemed to be crawling with deer sign. Lots of fresh rubs about the place, and a few scrapes starting to be dug. Some of the rubs were right on top of old scrapes that I'm sure will start getting used more soon. With the amount of sign, what was going to be a trail cam mission quickly turned into a serious hunt. I poked around very slowly, paying attention to the different scrapes and how I might come into them in a few weeks.

While poking through some of the tight pines, I looked up and noticed a boar trotting towards me. Not the big fella I mentioned earlier, but a serious boar none the less. It was one of those moments where I noticed him so late, it was almost like he was on top of me before I could even register what was going on. My immediate thought was "there's no way I'm going to get this fella" but I nocked an arrow and stood still all the same. He slowed to a walk once he made out my outline, but I was wearing good camo and hoped he wouldn't get too worried. He came past at about five yards, and I stayed still, with my fingers taking up a bit of tension on the string, but at a very awkward angle to think about making the shot. He noticed me turning slightly as he made his way past, but I had enough trees between us that I hoped to get away with it, and by the time I came to full draw he was less than 15 yards away. I gave a little whistle to pull him up for a moment, and sent an arrow. Purely instinctive, without consciously aiming at all.

I saw it bury to the fletches in his flank and bounce out a little bit, but the angle was quartering away enough that I hoped I penetrated into his boiler room, as I watched him run off with the arrow sticking out his side. I always have a bit of a freak out moment after making a shot at an animal with the bow, as I'm red/green colourblind, the the thought of tracking an animal in long grass makes me nervous. In any case, while he ran off, he bumped into a few small bushes and looked to trip over a couple of times, so I thought he was properly hurting. After he made it out of sight (only about 50m) I followed him up quietly, and heard him gurgling right as I made it to where I last saw him. He was stone dead, with blood bubbling out his nostrils.

Besides being my first pic with a traditional bow, it's also my first kill with the original limb that were with the bow when it was given to me. The couple of goats I have taken were with a set of lighter limbs that I bought from America, as I couldn't handle these heavier limbs. 65# @ 28, so roughly 62-63 pounds at my draw, with an arrow of about 550gns, made short work of him.

I didn't cut him open to confirm where I hit him but the fact he piled up within less than 10 seconds, combined with the blood on his nose, confirms a solid hit into the lungs. I also cut his backstraps out and will turn them into schnitzels - he was putrid, but I like the idea of trying to develop a taste for boar with my first trad kill. 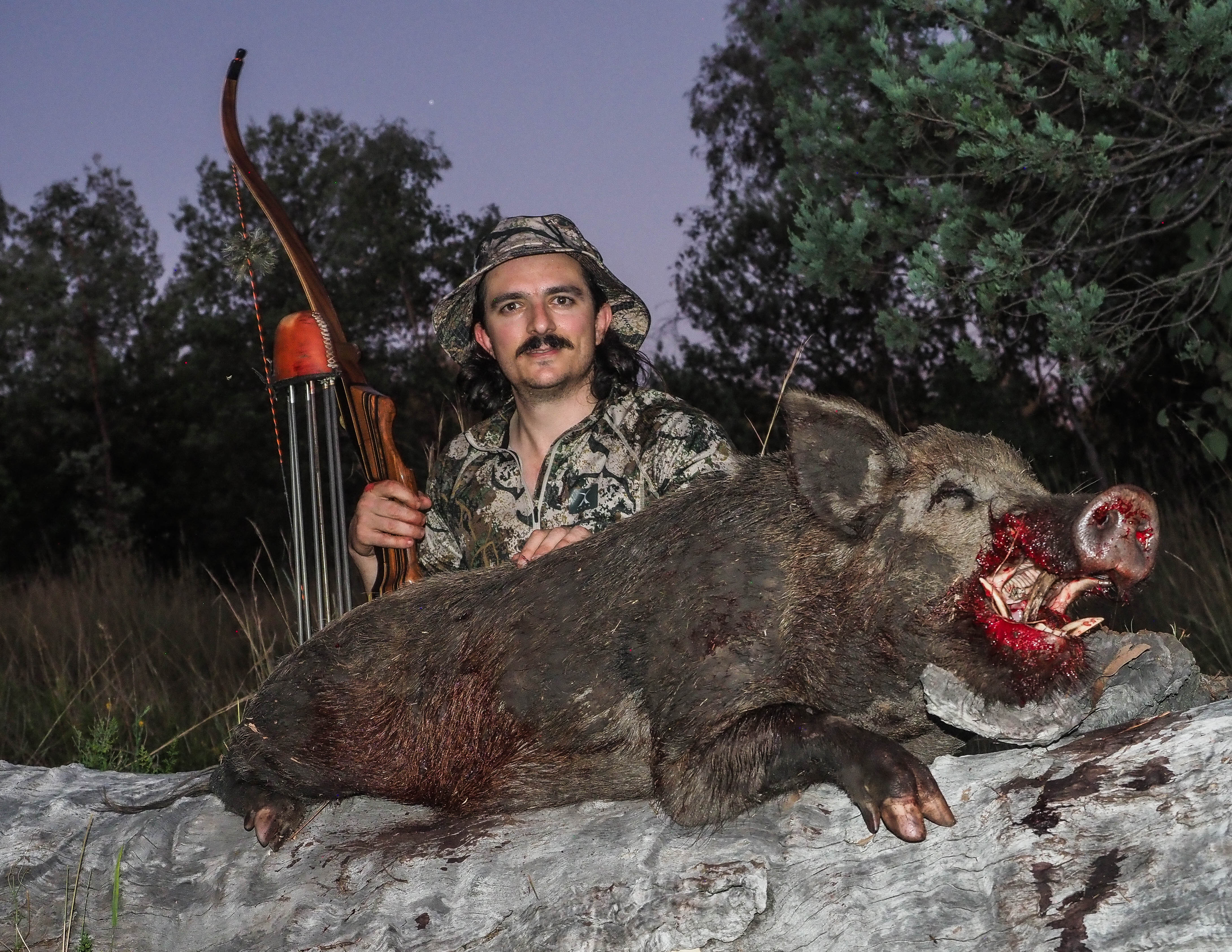 A picture I got on trail cam of him, minutes before I killed him. He was covered in mud, but didn't stop at this dam, so I found where he'd come from the next morning. 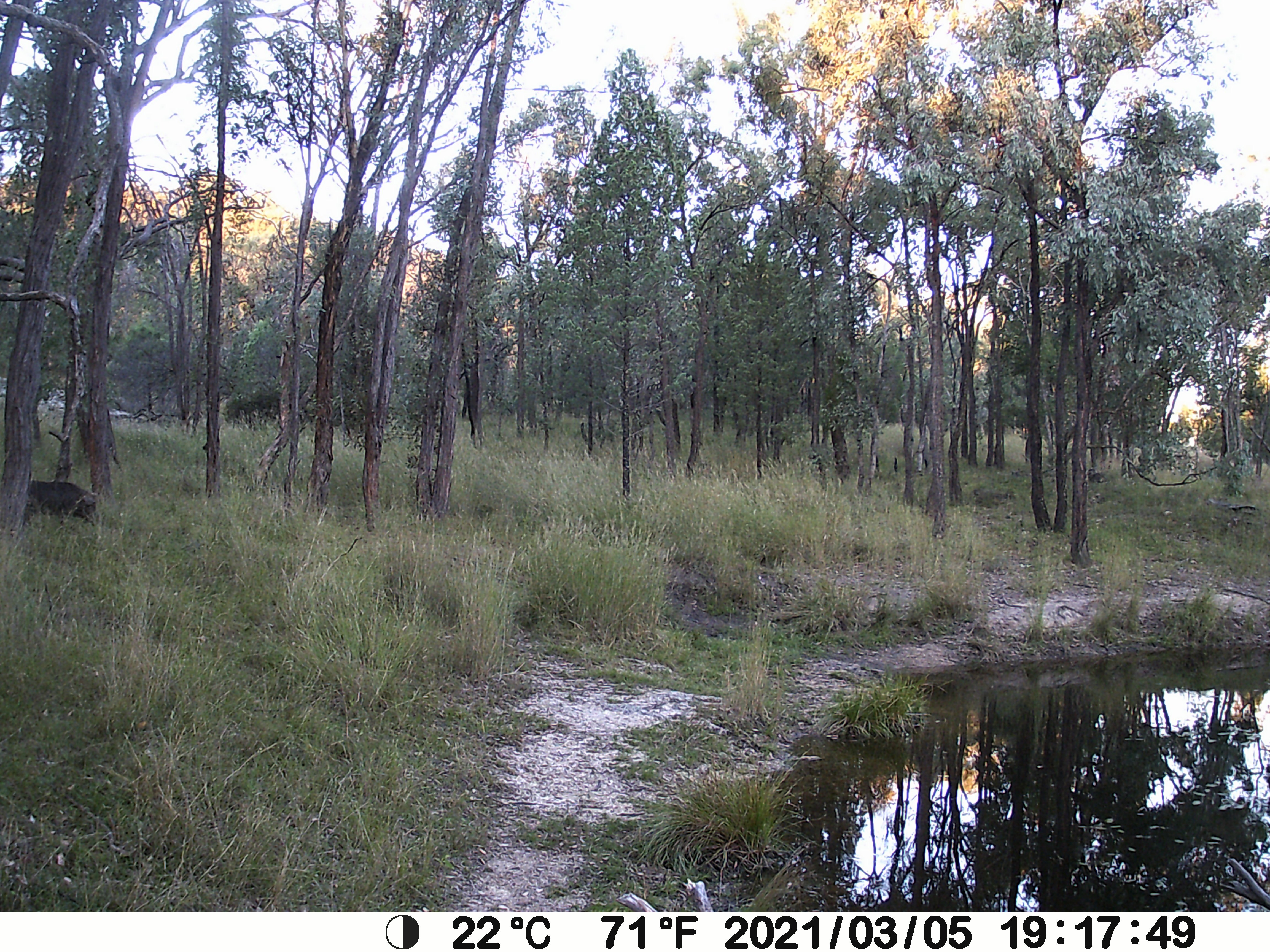 Here's the big one I mentioned earlier. I saw him the morning after I shot the other fella, in a big section of wet ground where water seems to soak out of the granite for a long time after rain. 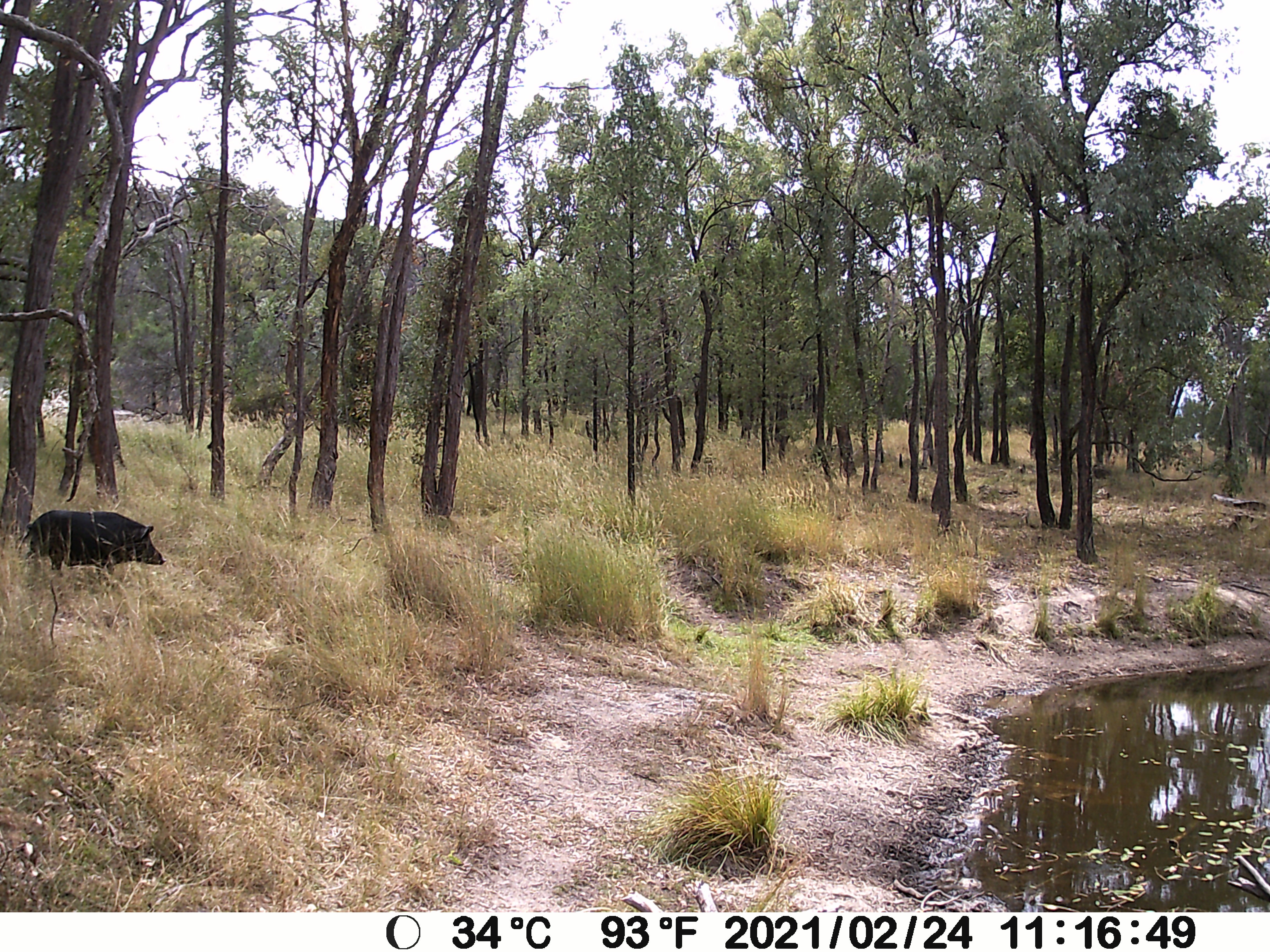 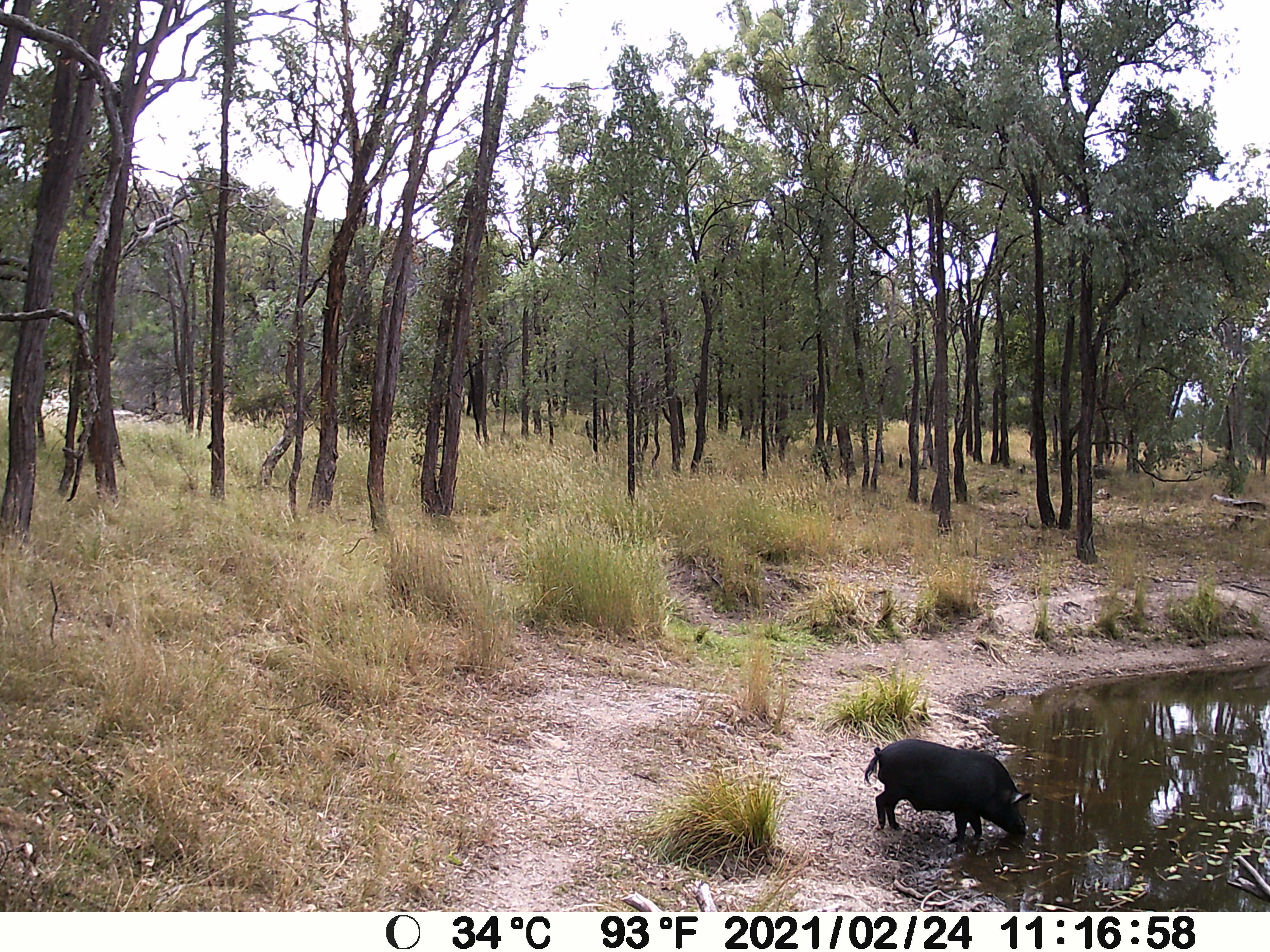 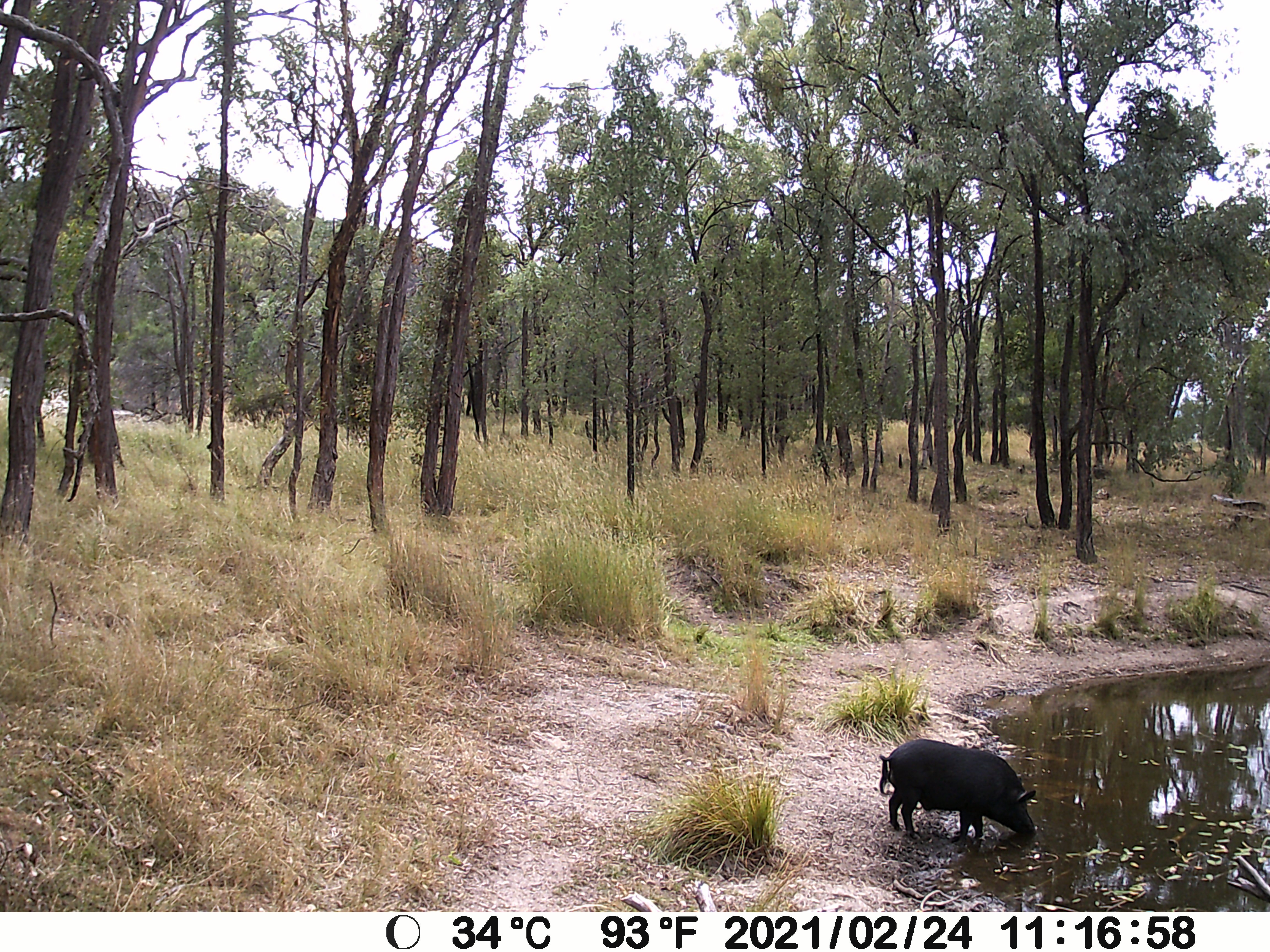 Great stuff man, congrats! Oh, and my boy thinks you look like Mario from the video games

Great story and pics. When all the covid stuff slows down I am hoping to get over to Australia and do some bowhunting. Any tips for planning a trip?
OP
W

Rob5589 said:
Great stuff man, congrats! Oh, and my boy thinks you look like Mario from the video games
Click to expand...

Funny story, mate.
I'm a school teacher, and we do runs of jerseys each year with a date on them, for our senior students, and teachers can buy them as well. The kids all put their nickname on the back of their jersey, and I was encouraged with the most recent one I bought to have 'Mario' on the back.


Quentin VanPelt said:
Great story and pics. When all the covid stuff slows down I am hoping to get over to Australia and do some bowhunting. Any tips for planning a trip?
Click to expand...

Send me a PM, mate. Maybe we could organise a bit of a swap hunt situation? If not, I will help however I can.
You must log in or register to reply here.

A
My dog's first grouse hunt

Story of My first Elk, Last Elk Hunt with Dad

Speed, cutters, and a flash of hooks

Thursday at 9:04 AM
coldboremiracle