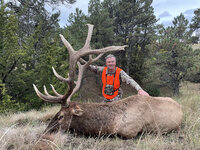 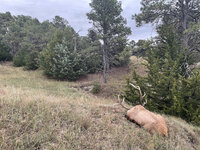 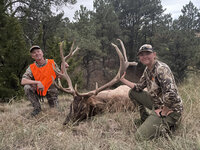 Hell of a bull man! Congratulations, can’t wait til I draw my NE bull tag haha

Stud bull! Those NE monarchs get to grow big. Congrats to hunter, guide and landowner!
J

Congratulations on the bull. He sure is a good one!
E

Just fantastic bull and story. Thanks for posting.

What a sweet bull!

Awesome bull and a great hunt! Appreciated having you out Rick, thanks for giving me a shot.
O

GREAT STORY, HUNT AND BULL. YOU DID IT UP ON YOUR ONCE IN A LIFETIME NE TAG, CONGRATULATIONS. I HAVE BEEN PUTTING IN FOR 8 YEARS SO HOPEFULLY MY TIME WILL COME.

THANKS FOR SHARING YOUR HUNT WITH US
A

Could you imagine what it was like there 250 years ago when the elk and bison roamed free and big! I wish I could set up a game camera in the 1740s and just see what was there!

Wow!! What a bull. Thanks for sharing the story and pics!

Thanks fellow hunters. .300 WSM 180 nosler partitions. The whole top of the partition separated from the core and the core was stuck in the hide on the shoulder of the other side Jordan has a picture of the bullet stuck in the hide as I was capping it.

I was thinking the same thing as Aaron about what it would have been like 250 years ago. As you looked down the Niobrara River Valley would have had an unbelievable of animals from buffalo to elk and the bird life would have been incredible with the migration on. Throw in the fact the Lakota and Pawnee traditionally fought over the hunting of the valley and WOW!
You must log in or register to reply here.