Man thats tough. I can't imagine what your going through with that, but I know it would be hard for sure. Kudos to you for sticking with him and having the patience to understand what he is going through as well. Keep the positivity up and the hunt will be successful, even though he might not harvest an elk.

Get yourself an R bros rifle.( Apex Hunter Model)
W

Desk Jockey said:
Interesting jump from an AK to a nice creedmoor.

curious how people feel about the creed as a killer over say 500 yards. At 800-1000 yards I think you have 600-700 ft pds of energy vs over 1000 for a magnum. Probably enough for deer. Maybe less than some would like for Elk. what does the crew think.

FWIW I am a big fan of the creed. Have only taken one deer with mine but it managed to stagger all of 5 feet before it dropped.
Click to expand...

I don’t think the creed is what you want way out there for elk. I know many have done it successfully. Really depends on the bullet and load though. Figure out what bullet you want to use, and a speed you can reasonably get out of it, then do some math. At what range does the bullet lose too much speed and energy to comfortably take game. I like a good cushion. My chosen bullet will function as intended down to at least 1800fps, and likely a fair bit lower. I set my max range at 1950 or so. Perfect conditions and a good broadside? Maybe a touch farther. Frontal or quartering to? Probably not unless I still have 2100. I don’t like to push limits. If I did, I’d carry something else.

Mackay Sagebrush said:
The Game Ears is an excellent idea. He has great hearing aids, but hates to wear them due to the wind noise, so he often takes them out, The primary problem is his mental state. He absolutely does not see this but he gets caught up/fixated in minutia. along with doing all manner of things that he does not recognize.

Last time we hunted together I spotted a big herd of elk out on an open sagebrush flat where as luck would have it, we could drive within shooting distance. We walked back back down to the truck and I told him that we would slowly drive as close as possible. I told him to get ready and we would drive up and he could hop out. I would use my laser range finder, get a reading and he could then shoot. I was not even going to shoot one. I just wanted to make sure he did.

We drove up, I hopped out, put my LRF on the elk, got a reading and said something like 275. I heard him muttering. I assumed he was getting ready to shoot. I then waited,as the elk were now moving away. I gave another reading. 350. I heard him pulling on the seat belt, fiddling with it. I took another reading 400 yards.

He stood there outside the truck and informed me that the seat belt on the passenger side of my pickup truck was not retracting right, and it should be adjusted.. The elk were now over 600 yards away. I put my range finder away. The opportunity was over.


He gets caught up in small details and loses focus on the big picture. He absolutely does not see it though and you can't tell him that he is slipping.

Tough deal, as he is extremely well educated and has been an exceptional hunter throughout his life. This has just started coming on in the last couple of years. Tough to watch and deal with.

The other thing is his reloading. He has been reloading for more than 50 years and I cannot get him to stop. I have suggested that he just buy ammo for his new 6,5 Creedmoor, as nothing he is loading is going to be as accurate as the factory loads that Hornady is putting out. The real truth is that I am afraid that he is going to make a mistake and there is going to be an accident. My plan was to buy him a bunch of boxes of factory ammo for Christmas, but it is not readily available at the moment. Hopefully I can gather enough components and develop a load that shoots in both his rifle and mine, and load for both of us. Maybe that will eliminate that one problem...

Again, I am just hoping to have him get at least one more elk this season.
Click to expand...

I’ve gone through a similar path with my dad, but we are way past the “one more hunt stage”. If you’re short components to at least solve that portion, post up what you’re looking for. I’d bet a few people who’ve gone through this would happily help you out. I know I would. There are some Scenars, Bergers and RDFs to be had, but the Hornady offerings are pretty much gone. I’m you’ve got primer and powder, those might be an option.


Sent from my iPad using Tapatalk

Did you make a decision OP?

It’s 7 lbs 6 ounces field ready with 4 rounds in it and a Meopta MeoPro 4-14 x44 scope. Talley lightweight rings and bases.

Stupidly accurate and holds groups really well even when stretching it out with both factory and hand load ammo. It’s killed animals past 1,000 yards in both California and Idaho.


The little 129 SST smacked down this 236 lb whitetail at 200 yards. They grow them big up on the Minnesota/Manitoba border. Broadside lung was mush. He ran 20 yards and collapsed hard.

How did you get bare rifle to 5lb 4oz?
Thanks

Thanks for the comments.

My dad (who is pushing 80) is going to switch this year from his standard .300 win T3 to a 6.5 CM for elk, which I think is a smart move. He simply shoots it better. Last month we were up in the high country looking for a buck for him to shoot, and while we did not see anything for him to punch a tag, I did see about 50 elk (our elk hunt is next month).

He has lost a lot of upper body mass (and weight in general since he hit his 70s) and the 6.5 makes sense for him. I don't know how many seasons he has left in him, so if a lighter recoiling rifle will help, then why not. Of the 3 6.5 CMs he has (a Savage, a Kimber, and a Tikka) , the T3 is by far the standout accuracy wise.

A real problem for him is that he can't hear, and has become the loudest guy in the mountains, along with the onset of dementia (which he does not even see), he talks in a louder than normal conversational voice that can be heard hundreds of yards away, and has a hard time seeing animals in general now.

Hoping to get him on one last elk this year, and with a light kicking rifle, have him drop one with relative ease!

Last month about 10K feet up, close to our cabin in ID: 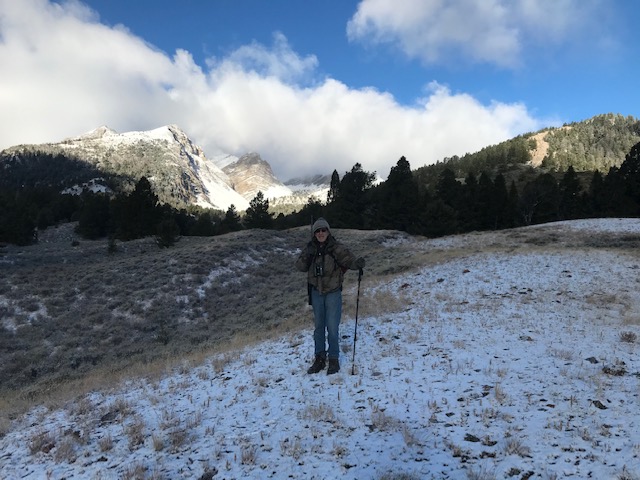 After killing elk for 50 years, I would like to have him have one last successful season. We will see!
Click to expand...

So what is wrong with a Christianson Arms in 300WSM? I have a Carbon Classic in that caliber. Very light rifle and sounds like OP has the budget for it since he is buying Swaro glass. Not one person suggested 300WSM. With a brake you barely notice the recoil. I run an Omega 30 can on mine and its a breeze to shoot. Ammo isnt cheap, but what is these days.

6.5 Creedmore Christensen Arms Ridgleline topped with a Swarovski Z5 5-25x52 BRH scope $2600 This is a great shooter. It has about 75 rounds through it. No scratches in either the gun or the scope. The glass is perfect on the scope. I can send more pics if needed.

Just saw this one for sale as well , since you are wanting a CM.

wyosam said:
I’ve gone through a similar path with my dad, but we are way past the “one more hunt stage”. If you’re short components to at least solve that portion, post up what you’re looking for. I’d bet a few people who’ve gone through this would happily help you out. I know I would. There are some Scenars, Bergers and RDFs to be had, but the Hornady offerings are pretty much gone. I’m you’ve got primer and powder, those might be an option.
Click to expand...

I appreciate the kind gesture. I have enough components, Time is the real commodity I lack (like most of us). I did get up to my cabin and look around this last weekend and there were no shortage of elk, both cows and bulls, out. We shall see how it works out here pretty soon.

I've been really happy with my Tikka T3x build in 6.5 prc. it's topped with a Vortex viper Gen2 5-25x. Proof Research barrel, Mesa carbon stock. After load development, I'm confident out to 600 yards for deer, and I can pack it all day. We've had a few Tikka's through my dad's shop and have been very happy with the actions, trigger, and accuracy. They make a great start for a custom build.

I need a new prairie rifle