I know the $30 poles Costco carries get a lot of love here, but I just saw that Cascade Mountain Tech has a "new" ultralight option. At 5.6 ounces per pole without the boots, and $65 per pair, these are checking a lot of boxes for me. Has anyone here tried them? I've been looking at Locus Gear CP3s and Gossamer Gear LT5s, but this would be a pretty big cost savings without much more weight at all. And certainly lighter than the 18-20 ounce aluminum poles I've been using.

I wish they would have left the cork grip but I’m not buying until Costco had them. Otherwise they are just a cheap pole...

I went ahead and bought a pair of these to try out. Weight on my scale for both poles is 12 ounces, with the rubber tips. They only collapse down to 31 inches (I think advertised at 30). Neither of those packed dimensions is ideal, but I'll take it for the weight. Extended out to 130 cm, I didn't get any slip putting as much of my weight as I could on each pole. Of course, there's some flex, but I expected that with CF poles. I'll hike with them soon and see how they do, and will update here whether I do or do not destroy them. 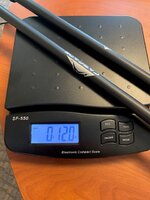 Took these for a walk this morning. Might be several days before I'm able to actually get them on a real hike. I'm not a big trekking pole user, but I'm having trouble finding a reason not to like them. I don't mind the foam grips; I assume you could replace them with cork, but I'm not considering it at this time.

Just to see what they're worth weight-wise, I took off the straps and the rubber boots. Each strap was half an ounce, and each rubber boot was 0.4 ounce. With those removed, each pole is 5.1 ounces. I hate wrist straps, so I'm going to leave those off for now. I'll probably put the rubber boots back on to keep from having to yank the poles out of softer soil and mud.

Sounds like a good deal, thanks for reviewing.
OP
D

I never did update this, but I still like these poles a lot. I've beaten the crap out of them over the past month or so and haven't had any issues so far. Been using them without the straps or boots, like a weight weenie, and don't see any reason to put those components back on at this point. Actually, I've found that I really like not having the boots on because I can stop and jab them into the ground while I'm using my binos or screwing around with OnX on my phone.

The flick locks are just like the ones on CMT's other poles - meaning they need to be snugged up fairly often if you don't want your poles collapsing on you. Not a gripe, just an observation.

I'm not a huge fan of the grip, but it's the shape I dislike, not the material.

The packed length is a bit of a pain, but I've been stowing them in the side pockets on my Exo so I can reach up and pull them out if needed while I'm hiking. I can't put them back in with the pack on, but they're light enough that I don't notice them much just carrying them around when not in use. I'd love to have the packed length of the LT5s or CP3s, but for the lower price on these CMTs they are a very good deal in my book.
You must log in or register to reply here.