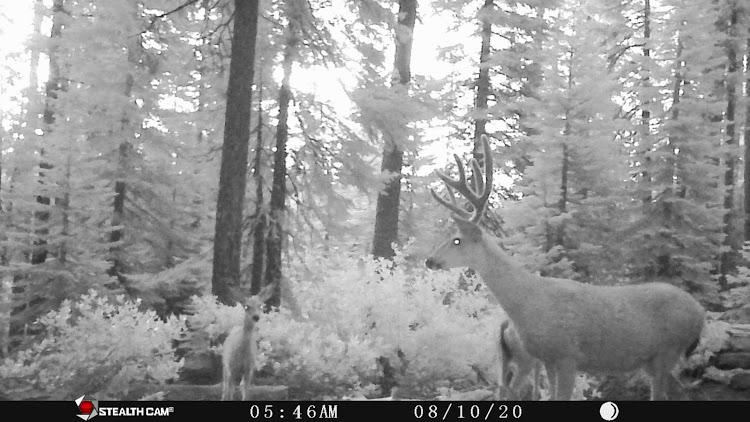 So there I was... Ha-ha. Maybe I shouldn’t start my story off that way. It’s probably better to say the last archery kill I achieved was in 2016. It wasn’t for lack of drawing tags, it was for a lack of my stalking ability and just - well if truth be told - I wasn’t getting away from the truck. It’s been 4 years of blown stalks, 4 years of gear accumulation, and 4 years of constant learning. Deer are awesome animals.

Last fall I finally decided to get a tree stand. By that time I was a lot better hunter, but my archery kills wouldn’t show anyone that. I hunted out the rest of Bear season in that stand, learned some of the ins and outs, and looked forward to next archery season. Sadly, I didn’t kill my bear.

I drew a C Tag in Northeastern CA (where I’m from) and began the scouting season early in June. I found several bachelor groups, learned their peak hours, and developed a plan.

Now C tags aren’t known to produce big CA Mulies, on the contrary C Tags normally produce mass amounts of forked bucks killed from the road. Thankfully, I left that method of hunting a few years ago. In my scouting I found the buck I wanted and focused and getting to know him.

It was clear he preferred to be in the area between 0530 - 0645. After that he became a ghost. He wouldn’t water everyday. He liked to get a drink around every 7 - 10 days. So I knew I could be in for days of seeing nothing. But for a C Tag he was a dandy I was prepared to wait (sort of).

The day before the opener, I checked the camera one last time. He’d been there on the 10th. I knew he would arrive in the coming days, but I was in for a wait.

Opening morning, I got in the climber and inched up the tree in the dark (man what a pain in the ass). Once I settled in, the long game of standing still begun. Sadly, a half hour after shooting light, I heard a Doe blow hard (before I could see her) and two deer hurried back up the mountain. The reason this was particularly upsetting was that the only Doe coming into that set tended to hang out with the buck I chose.

I backed out of the set later, convinced I blew my opportunity to get the buck I wanted in my sights. Day 1 and Day 2 passed. Nothing but birds and squirrels chasing each other.

It was difficult not to cut bait and try other spots where I’d be hunting smaller bucks. But I remembered a Whitetail video I watched the day before I headed to the mountains. The dude has 2 big rules. 1. Don’t over hunt a set and 2. Trust your scouting. I decided to listen to the man from Missouri and keep hunting that spot knowing I might eat that tag.

Eating a tag. That was a thought I could never take when I was a brand new hunter. That said, I’m approaching my 10th year as an adult-onset hunter and with that time I’ve learned a lot. The main thing is persistence pays off.

The morning of Day 3 rolled around. 0330 I got out of my bag, put my clothes on, cammo painted my face, and headed for the top. I took with me the smaller lessons learned throughout the first few days of hunting and resigned myself to standing perfectly still.

Around the peak 1st light hours I heard something creeping slowly down the draw above me. The noise sounded like a Black Bear, and by this time I was just ready to test my metal as a tree stand bow hunter. I slowly grabbed my bow, stayed still, and waited for the animal to come into the open.

Further up the draw to my left, a deer walked out of the dark timber. It was him! I felt the normal adrenaline rush we are all familiar with. As soon as the blood started pumping I recognized the need to start walking myself through my shot process. I watched the buck circle me high up on the draw. I started to think he saw me and wanted to walk out of the area at the higher elevation. I looked further to my left and found a lane through a hole in the trees. 67 yards. I’m confident at that range. So that was my worst case senario shot.

Thankfully he decided to jump over a downed tree and head in my direction. Now a new predicament presented itself. At his current angle, I would have to draw and hold for a long time. I took a quiet breath waited for him to put his head behind the last tree and drew my bow.

This was a cautious buck. He was the type that takes a step or two and looks everywhere (even up). I don’t know how long I held my bow at full draw, but I do know I was shaking quite a bit. Finally, he walked into a pre-ranged spot. I checked my bubble, settled my pin, let of the safe, and began pulling through my shot.

I’ve never seen a deer drop like it got hit by a 50 cal. before, but this shot hit its mark and I watched him fall hard in his tracks take a breath and pass away promptly. Man what an experience. I’m not much of a fist pumper ha-ha.

I just sat in the tree for a while quietly looking at the buck lay in front of me at 31 yards away. I played it over in my mind, and thought of all the things I had to learn before getting to where I was. I’ve learned not to draw when I can see a Buck’s eyes, to come in before the sun comes up, to never look at the antlers after I’ve decided to take the deer, and to walk myself through the shot process as I am doing it. Most importantly, I’ve learned not to second guess myself, to make a decision stick with it, and always be persistent. What a great hunt.

I am happy you enjoyed that. Thank you bro.

Sent from my SM-G970U using Tapatalk
Click to expand...

For the tag I’m stoked

Thanks for checking out my story.

bguitierez said:
Thanks for checking out my story.

I would have gave up hunting a long time ago if it was only about the killing. The memories with good friends and the stories are what I enjoy most.
OP

hunterted67 said:
I would have gave up hunting a long time ago if it was only about the killing. The memories with good friends and the stories are what I enjoy most.
Click to expand...

I think we see eye to eye on that my friend.

Sweet, thanks for sharing!

Enjoyed your write up congratulations

Bubblehide said:
Sweet, thanks for sharing!
Click to expand...

Sent from my moto z3 using Tapatalk
Click to expand...

Hey bud thanks for reading it. Means a lot.

Awesome! Excellent story and deer!
You must log in or register to reply here.