So I just opened three packs (all ordered from the same vendor, but at different times) of QAD Exodus broadheads to weigh them and start building up arrows for BH tuning. It looks like all of them have a brown discoloration where the blades are not sharpened (trailing edge) as well as where the blade enters the ferrule. The discoloration is on all three blades (and all nine heads) and is on the same side of the blade (like something in manufacturing didn't get totally polished off?). It almost looks burnt and is dark brown in color.

It does not look like there is any discoloration elsewhere, and they are very sharp.

Is this normal for QAD? Should I be concerned and get replacement blades? One theory I have is that they use a laser to cut the blades and I'm seeing burning (totally harmless) from that process.

I tried taking a picture best I could (see trailing edge of left blade). 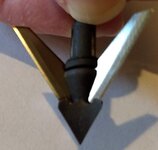 It's normal, all of mine have had it.

Something in manufacturing, either cleanest plasma I have ever seen or some sort of laser like you said.
G

It's the burn from the laser. Mine have all had it too. The telltale signs, as you noted, the discoloration is on 1 side, and it only near the cut area. If you look close, you can actually see the lines as the laser moves along the edge, versus stamping which has a clean shear followed by a break in the thickness which can cause a burr. Plasma or waterjet would work too, but the laser is faster with as good as results as the waterjet and starts quicker than the plasma with less kerf.

Appreciate the sanity check. I figured it was either something from manufacturing or the most consistent rust pattern I've ever seen.

Now let's hope I put one through an elk in a few weeks!
You must log in or register to reply here.